Less Than One Month And Creation Theories 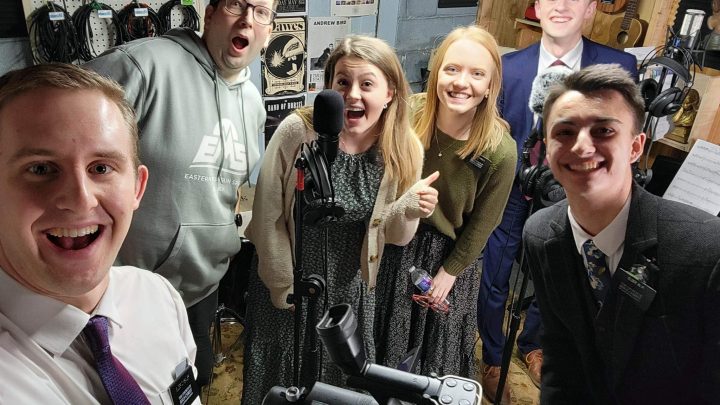 Less than one month from today I’ll be stepping off a plane in Utah…holy smokes. Being at the last tail end of my mission is such a strange feeling. It’s really hard to describe but it’s very much bittersweet. I’m like 50% excited to go home and see my family but 50% so sad to leave my mission and everyone here. Time is going wayyy too fast! I always say that but that’s how I feel lol.
This week was good!! On Thursday, we had MLC (mission leadership council). I’ve been very blessed to be a sister training leader the past 9 transfers and it’s been such an honor. I always learn so much at these training meetings, too. I’ve grown in a lot of ways from trying my best to love and get to know the Sisters in my zone! 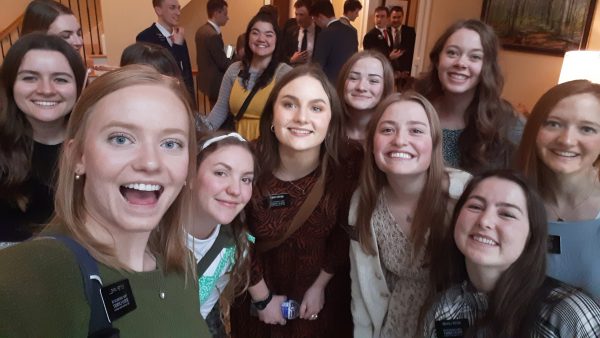 After MLC, we went to the home of the Bishop in Syracuse. He has recording equipment so a bunch of us missionaries recorded a song! We’re working on a music video before I leave & I am really excited about it. It’s definitely a blessing and a curse that I had experience with recording music before my mission. It’s a blessing because I know how it works & can help everyone but it’s a curse because I have high expectations lol. I know God will make this project turn out the way it needs to be! I’m so grateful for the opportunity I’ve had to use music on my mission!! It’s been a dream!
Our friend CAME TO CHURCH ON SUNDAY!!! She brought her sister, too. Eek it was so awesome! The Lockport Ward is seriously the best at fellowshipping our friends who come. The second they see someone they don’t recognize, they walk up to introduce themselves. It’s so amazing to see! I want to be like that when I’m home. Our friend is so sweet. She is on date for baptism the last weekend I’m here and I want to be there so badly!! If y’all can pray for her to be able to be baptized, please please do. We found out some struggles she’s going to have to overcome as well so pray that she’ll have the strength to do that!
I’ve been reading the Saints Volume 1 about church history and wow, I have so much love and respect for the early Saints. They went through so much persecution that makes me so sad. But I also love reading about how God truly led Joseph Smith and others to restore His church. This is 100% God’s church on the earth today. Come and see!!!
I love y’all! So grateful for those of you who still read my emails haha. I love sharing cool experiences I’ve had!

¡Qué tal! ¿Todo en orden? Espero que sí. ¡Esta semana fue buena!
Tuesday: We started off the day with a really good lesson about the Plan of Salvation with one of our amigas. The spirit was very very strong. I have been thinking about and working on lately trying to ask questions like the Savior does. A question came to my mind to ask her and when she answered she started crying because the spirit was so strong. The spirit is sooooo important in this work. If we don’t have it, we can’t do anything. Later at night, we knocked on this door and some dude answered. We started talking to him about the Restoration. Later on he told us very seriously that he has seen Jesus. His description of Jesus’ eyes was basically the same as Joseph Smith’s in Doctrine and Covenants 110. Who knows… 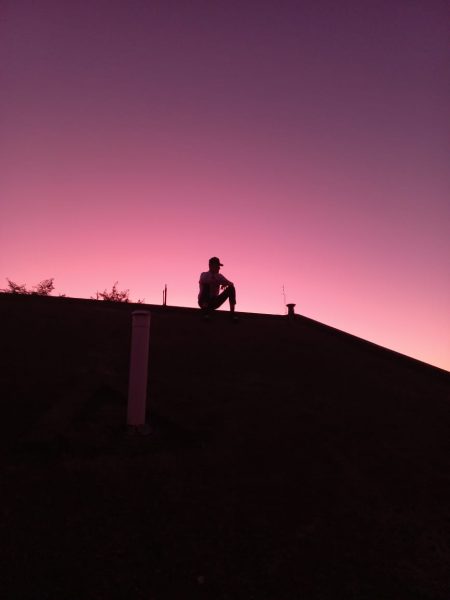 Wednesday: It rained all afternoon so nobody was outside and obviously that makes the work a little bit hard. But we just walked to some members houses to share short messages. We learned that one of the members owns 14 cats! He used to have 20! Crazy. In the morning, we visited this poor neighborhood in my area that I had never been to. I can’t explain it but I just felt drawn to it. I could literally feel something, like I needed to be in this area and that someone in that area needed us. It was cool. (More on this later) Later that night we were texting the dude who told us he´s seen Jesus. He told is he had read the introduction to the BOM and the testimonies of the 3 & 8 witnesses. He then told us that he is the 4th witness and that his testimony is the same as Joseph Smith’s…. Oh….and that God created the world through a squirrel…. But on the bright side, at least he believes that Joseph Smith saw Jesus….ajajaja
Thursday: WE PUT OUR FRIEND ON DATE TO BE BAPTIZED. It was a really good lesson and the spirit was very strong. She has for sure been prepared by the Holy Ghost. It’s crazy to see that in reality some people are only kept from the truth because they just don’t know where to find it. It is amazing to be an instrument in the hands of God to bring light to souls that are in darkness! After that lesson we went to the area that I had felt drawn to. We found a family and we had a really good discussion with them. The father has some questions that only the restored gospel of Jesus Christ has answers to. He has a lot of potential so I have faith that he can go far. Don’t know why but later in the afternoon I was feeling really sad and unmotivated. We stopped by a member’s house to use the bathroom, (my comp does this so much, he knocks on members doors to use the bathroom or to beg for water jajaja) anyway, I was in the bathroom and washing my hands and I just prayed to God for comfort and that he could lift my spirits. We had a good lesson with his member and the spirit was really strong and God answered my prayer through that lesson. God is good! Pray pray pray! God is there waiting to listen. 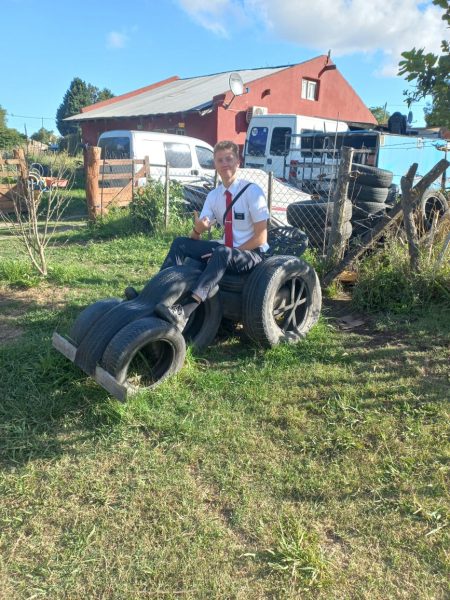 Friday: Did divisions with my boy Elder Buttars. He was in my district in the MTC and we’ve been in the same district since. What a day it was. We saw a craazzzzyyyyy miracle. We stopped by the house of one of their amigas and her son and daughter in law were visiting. We shared a really good lesson about the Atonement, and then afterwards we just had a little conversation. While we were talking the thought came into my head, “They’re from Jorge Newbery(my area).” I just kind of pushed it off as wishful thinking. But later I asked them where they’re from and they said that they are from JORGE NEWBERY!!! So I got their number and we’re gonna start teaching them. God is in this work. Oh… and the crazy thing is that they were talking about the missionaries right before we showed up. Crazy. God’s timing is the perfect timing. Later Elder Buttars and I made some empanadas. They were pretty good for our first time making them. Empanadas are soooo good. By far my favorite food here. 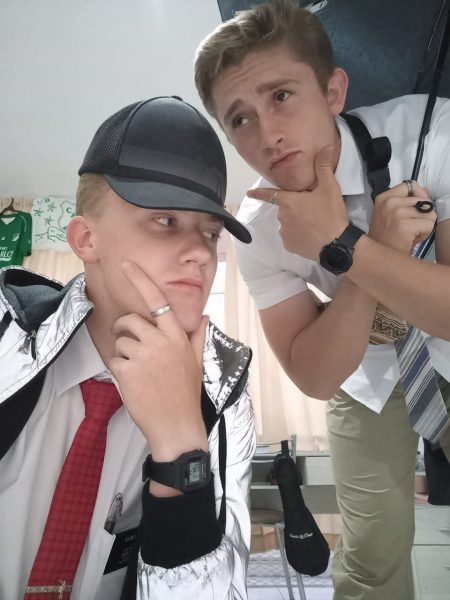 Saturday: Did a service project and helped paint a house. Was pretty fun. I was thinking alot this day about my weaknesses and how human I am. I am so grateful that I haave a way to repent and become better. Ether 12:27. JESUS IS LITTERALY THE BEST THING EVER. Alma 7:7
Sunday: This past month we have been finding it really hard to get people to church, we are inviting everyone, having the members invite people, promising blessings, all of the above but it wasn’t working. But yesterday we had a friend show up to church! A little small miracle but it was what I needed. Some fruit of all my hard work. It was an answer to my prayers and fasting. As long as I am obedient, pray like everything depends on God, and work like everything depends on me, the Lord will magnify my efforts.
Stay tuned for some more amazing miracles! Please pray for me, Alejandra, and basically all the people here in Jorge Newbery! I love you guys! Feel free to email me!
Hello Saints: Pastor Learns Everything He Can About The Church of Jesus Christ of Latter-day Saints
← Previous
Quotes About the Book of Mormon from Prophets and Leaders
Next →
0 shares