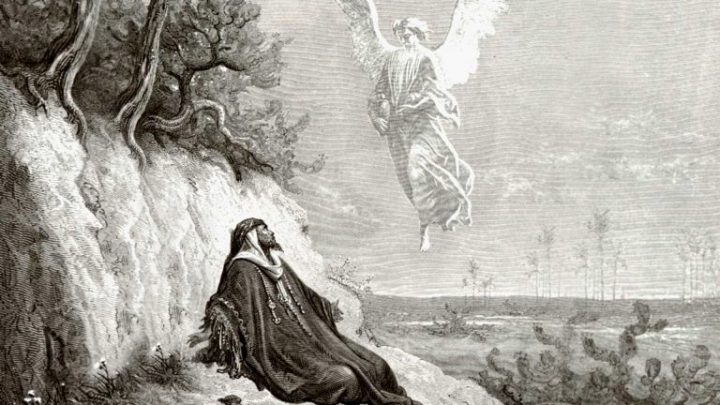 View the article on Book of Mormon Central.

“Now it came to pass that after Alma had received his message from the angel of the Lord he returned speedily to the land of Ammonihah.” Alma 8:18

In addition to these four core features, Britt noticed seven other elements that many of the texts in his study shared: (1) food or fasting, (2) the mention of a successor or assistant, (3) rival or false prophets, (4) a reference to crossing or passing over, (5) mention of the prophet’s death, (6) a rock or hiding place, and (7) the theme of prophetic silence or concealment.2 While only a few of those twenty-five Old Testament narratives contain all of the seven additional elements, most feature at least three of them in addition to the core four.

How can one account for so many biblical texts sharing these features? Britt’s thesis is that they all belong to what scholars call a type scene, meaning a general narrative template with standard elements, motifs, and themes. A good comparison for modern readers might be the narrative pattern known as the hero’s journey, in which a hero embarks on a journey, is aided by a mentor, overcomes a series of obstacles, and then returns home as a changed person. Biblical narratives had similar narrative templates, just with different sets of common elements.

Remarkably, the account of Alma’s prophetic mission to reclaim the apostate inhabitants of Ammonihah follows the same core pattern as the twenty-five texts identified in Britt’s analysis; it also includes most (and perhaps all) of the seven additional elements.3 It is thus an exceptional example of this particular type scene.4 To help demonstrate this, Alma’s account will be compared to one of the best biblical examples of the type scene: the story of Elijah found in 1 Kings 18–19, which not only features the core pattern but also has each of the seven additional elements.

The crisis or danger faced by the prophet often relates to a significant breach of the Lord’s covenant. Just as the rulers in Elijah’s day were leading the people to worship false gods (see 1 Kings 16:30–33), Alma warned the people of Ammonihah that they had broken the covenantal promise given to Lehi and that instead of being blessed and prospered, they would be destroyed (Alma 9:13–25, esp. vv. 18–19). Ammonihah’s apostasy was a covenantal crisis of significant proportions, as it threatened the peace and stability of the Nephite nation as a whole (Alma 8:17; see also 10:27).

God or a Divine Messenger Appears

In response to the crisis, the prophet typically experiences a divine vision or manifestation of God or of another divine messenger. In 1 Kings 19, Elijah was repeatedly visited by an angel (vv. 5–7), after which he encountered a series of powerful manifestations (earthquake, wind, fire), followed by a divine “still small voice” (vv. 11–12) as the Lord passed by Mount Horeb. Similarly, “while Alma was … weighed down with sorrow” after being cast out of Ammonihah, “an angel of the Lord appeared unto him, saying: Blessed art thou, Alma; therefore, lift up thy head and rejoice” (Alma 8:14–15).

As explained by Britt, “The third main element is the commissioning or recommissioning of the prophet. The moment of negativity … must be overcome.” This commission includes a “new affirmation of the prophet’s task and an immediate plan of action.”5 Elijah was commanded to anoint new kings and find Elisha, who would be instrumental in Elijah’s ministry from this point forward (1 Kings 19:15–16).

In Alma’s case, the angel gave him a clear recommission: “I am sent to command thee that thou return to the city of Ammonihah, and preach again unto the people of the city; yea, preach unto them. Yea, say unto them, except they repent the Lord God will destroy them” (Alma 8:16).6 Upon his return to the city, Alma miraculously found Amulek, who then played a crucial role in Alma’s ministry (see Alma 8:19–30; see also 31:6; 34:1).7

“Without delay,” writes Britt, “steps are taken to return the prophet to the role as mediatory between God and people, and the narrative moves on. This sometimes involves the continuation of a physical journey: back to Israel, back into battle, or back to the work of mediating between God and people.”8 Elijah, for instance, immediately “departed thence” to fulfil the Lord’s commands (1 Kings 19:19). Alma likewise “returned speedily to the land of Ammonihah” right after his encounter with the angel (Alma 8:18).

Ancient prophets employed literary techniques to strengthen their message and speak to the needs of their audience. As a high priest, former chief judge, son of a prophet, and custodian of the plates of brass, Alma would understandably have had the know-how and literary ability to emphasize in his retelling the aspects of his experiences that conform to this biblical type scene. By authentically telling his personal experience in this manner, Alma invites readers to connect his story with prophetic figures in Israelite history who faced similar challenges in their own ministries.

For Book of Mormon peoples—who were a branch of ancient Israel—Alma’s account would have offered a stark warning that covenantal crises were not relegated to Israel’s distant past but were indeed playing out over again among them. Yet it would also affirm that God was continuing to call prophets to warn them of the errors of false teachers in their own time. The formulaic nature of the type scene would have placed Alma in the company of renowned Israelite prophets, including Elijah and Moses.

Recognizing the unique literary capabilities of Alma and his skillful use of type scenes can also benefit modern audiences. By identifying how ancient prophets utilized their literary talents, we can begin to understand how each historical scene is important based on the elements the prophets have chosen to include, exclude, or modify to fit their needs, strengthening the inspiring messages of their scenes, in particular, as well as of the Book of Mormon as a whole.

4.Most narratives are missing several of the elements; only a few contain them all. See Britt, “Prophetic Concealment,” 40–41.

6.For further discussion regarding the possible reasons Alma was sent back to Ammonihah, see Book of Mormon Central, “Why Did an Angel Send Alma back to Ammonihah? (Alma 8:17),” KnoWhy 565 (June 10, 2020).

7.The callings of Elisha and Amulek also fulfill another element of this type scene regarding a successor or assistant to the prophet. See Evidence Central, “Alma’s Recommission as a Type Scene.”