New Docudrama, Undaunted, Shares Story of Witnesses of the Book of Mormon 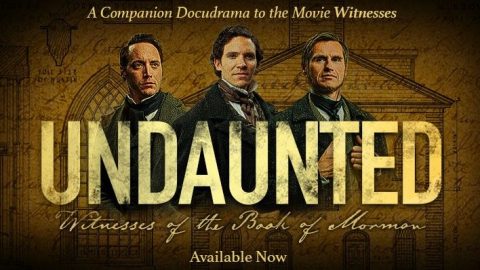 Were the eleven official witnesses—twelve if you include Joseph Smith himself—of the Book of Mormon reliable?

What about the unofficial witnesses who interacted with the plates in various ways—including a number of women?

Were the plates actually made of gold? How could witnesses really hear the voice of God and yet come to doubt Joseph Smith, His prophet?

All of these questions, and more, are probed in the new docudrama UNDAUNTED: Witnesses of the Book of Mormon.

The story of the original three witnesses of the Book of Mormon is remarkable. Oliver Cowdery, Martin Harris, and David Whitmer all left the organized church for a time, but none of them ever denied their claims of seeing the plates. Each boldly proclaimed their testimonies of the veracity of the things they had seen until their final day.

The June 2021 Witnesses film shared their stories in a way that anyone, young or old, previously familiar with these witnesses or not, could understand their narratives and experiences.

During the pandemic it played for 353 days in theaters nationwide and later saw a release on DVD and multiple streaming options including Apple, Google, and Amazon.

“We created it as a means of making the story of the witnesses to the Book of Mormon more familiar to members of the Church of Jesus Christ of Latter-day Saints and, we hope, eventually even to non-members,” stated Dan Peterson of The Interpreter Foundation.

“In my view, they represent a remarkable and very strong challenge to any who wish to dismiss the claims of the Book of Mormon and the Restoration.  They cannot simply be brushed aside as either conspirators or crazy people; their sincerity and sanity are well supported in abundant historical documentation.  And they—and the objectively physical objects to which they bear record (to say nothing of their encounters with an angel and their hearing the voice of God) make it impossible to write Joseph Smith’s claims off as merely the product of mental illness or imagination or simple lying.”

As successful as Witnesses continues to be, it was never the plan to only have a single film.

The original idea was to do a documentary or “docudrama”; the notion of a dramatic movie came later.

And now, a year later, that docudrama—titled “Undaunted: Witnesses of the Book of Mormon” —is finished.

“Undaunted” is divided into two parts that, altogether, total slightly less than 2.5 hours in length. It is available now with subtitles in Spanish, Portuguese, and French.

In a sense, this new docudrama is a sequel to the dramatic movie.

But it’s also an expansion and a commentary on that earlier film.  The ambition was for “Witnesses” to bring the Three Witnesses—Oliver Cowdery, Martin Harris, and David Whitmer—once more to the attention of members of the Church of Jesus Christ of Latter-day Saints, to increase member understanding and appreciation of them.

The hope was to refresh memories and to create a conversation.

And “Undaunted” is designed to further that conversation and to inform it. 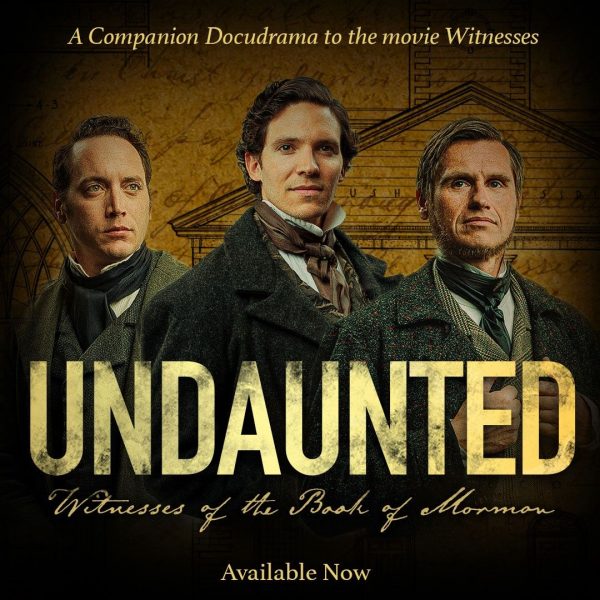 How does “Undaunted” differ from “Witnesses”?

Unlike the dramatic film that was shown in theaters, the new docudrama broadens our coverage beyond just the Three Witnesses.

“Undaunted” brings the story and the testimony of the Eight Witnesses in, as well.

Moreover, beyond them, it introduces its viewers to several of the informal or unofficial witnesses of the very tangible objects involved in the recovery of the Book of Mormon (for example, Mary Musselman Whitmer, Josiah Stowell, and Lucy Mack Smith).

Besides scenes drawn from the original “Witnesses,” it also features new segments that have been created especially for the docudrama itself.

Another feature of “Undaunted” is its inclusion of interviews and expert commentary, including noted Latter-day Saint scholars such as Richard Lyman Bushman, Susan Easton Black, Steven Harper, and Terryl Givens.

It also features the prominent non-member scholars John Turner, of Virginia’s George Mason University, and Ann Taves, a former president of the American Academy of Religion and a Distinguished Professor Emerita of Religious Studies at the University of California, Santa Barbara.

In addition, a retired federal prosecutor and a retired federal judge offer their perspectives on the importance of eyewitness testimony in the courtroom and, specifically, on the credibility of the Book of Mormon witnesses.

Further, an experienced metallurgist and metal worker who has created facsimiles of the Book of Mormon plates for the Church—and who, in fact, made the replica plates that were used in “Witnesses”—describes the challenge posed by any attempt to manufacture such plates as props for a fraud.  (Spoiler: Joseph Smith almost certainly couldn’t have done it.)

A really fun portion of this new release is the production of short “reels” ranging in length from 8-15 minutes each and distributed FREE.

These 18+ free reels are deep dives into individual topics which Witnesses film touched on, such as Sidney Rigdon, early Latter-day Saint plural marriage, the Spalding Manuscript as a commonly proposed non-divine source for the Book of Mormon, James Jesse Strang and his “Voree plates,” the Kirtland apostasy, etc.

Finally, an important component of the overall “Witnesses” effort is a website that is still growing and devoted to “Witnesses of the Book of Mormon”. It was first created as a support to the film projects and intended to grow as independently valuable and important in and of itself.

A theatrically-released film, streaming content, a docudrama, free content online for worldwide audiences, and more. Could the original witnesses have ever imagined their individual witnesses be shared in such remarkable ways?