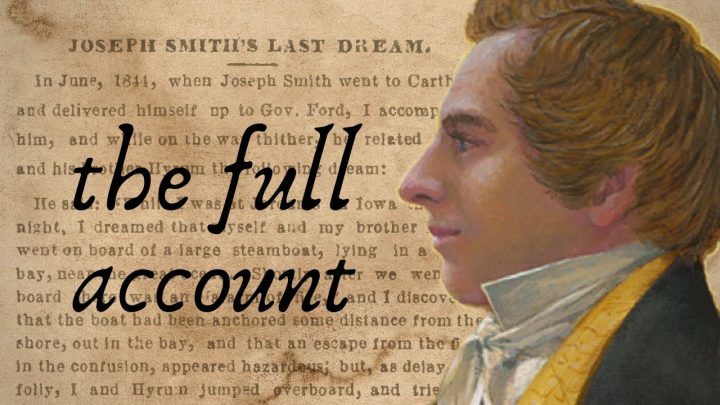 The following text is taken from an 1863 Salt Lake City Almanac published by W. W. Phelps.

In June, 1844, when Joseph Smith went to carthage and delivered himself up to Gov. Ford, I accompanied him, and while on the way thither, he related to me and his brother Hyrum the following dream:

He said: “While I was at Jordan’s in Iowa the other night, I dreamed that myself and my brother Hyrum went on board of a large steamboat, lying in a small bay, near the great ocean. Shortly after we went on board there was an “alarm of fire,” and I discovered that the boat had been anchored some distance from the shore, out in the bay, and that an escape from the fire, in the confusion, appeared hazardous; but, as delay was folly, I and Hyrum jumped overboard, and tried our faith at walking upon the water.

At first we sank in the water nearly to our knees, but as we proceeded we increased in faith, and were soon able to walk upon the water. On looking towards the burning boat in the east, we saw that it was drifting towards the wharf and the town, with a great flame and clouds of smoke; and, as if by whirlwind, the town was taking fire, too, so that the scene of destruction and horror of the frightened inhabitants was terrible.

We proceeded on the bosom of the mighty deep and were soon out of sight of land. The ocean was still; the rays of the sun were bright, and we forgot all the troubles of our Mother Earth. Just at that moment I heard the sound of a human voice, and, turning round, saw my brother Samuel H. approaching towards us from the east. We stopped and he came up. After a moment’s conversation he informed me that he had been lonesome back, and had made up his mind to go with me across the mighty deep.

We all started again, and in a short time were blest with the first sight of a city, whose gold and silver steeples and towers were more beautiful than any I had ever seen or heard of on earth. It stood, as it were, upon the western shore of the mighty deep we were walking on, and its order and glory seemed far beyond the wisdom of man. While we were gazing upon the perfection of the city, a small boat launched off from the port, and, almost as quick as thought, came to us. In an instant they took us on board and saluted us with a welcome, and with music such as is not on earth. The next scene, on landing, was more than I can describe: the greeting of old friends, the music from a thousand towers, and the light of God himself at the return of three of his sons, soothed my soul into a quiet and a joy that I felt as if I was truly in heaven. I gazed upon the splendor; I greeted my friends, I awoke, and lo, it was a dream!

While I meditated upon such a marvelous scene, I fell asleep again, and behold I stood near the shore of the burning boat, and there was a great consternation among the officers, crew and passengers of the flaming craft, as there seemed to be much ammunition or powder on board. The alarm was given that the fire was near the magazine, and in a moment, suddenly, it blew up with a great noise, and sank in deep water with all on board. I then turned to the country east, among the bushy openings, and saw William and Wilson Law endeavoring to escape from the wild beasts of the forest, but two lions rushed out of a thicket and devoured them. I awoke again.”

I will say that Joseph never told this dream again, as he was martyred about two days after. I relate from recollection as nearly as I can.

Our Approach to Motherhood May Be Devouring Our Joy
← Previous
New Docudrama, Undaunted, Shares Story of Witnesses of the Book of Mormon
Next →
0 shares