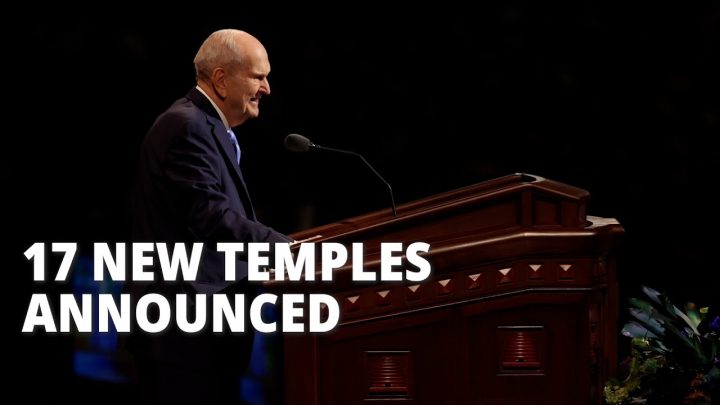 In the closing session of April 2022’s General Conference, President Russell M. Nelson announced 17 new temple locations. In the past 4 years, President Nelson has now announced 100 temples. The Church now has 282 total temples worldwide in operation, under construction or renovation, or announced.

As I watched President Nelson list off the names of the temple locations, I had an overwhelming feeling that this is the work of the Lord, and nothing is going to stop the kingdom of God from rolling forward. Brigham Young’s prophecy of thousands of temples now seems closer in reach. In 1856, Brigham Young famously proclaimed that:

“…to accomplish this work there will have to be not only one temple but thousands of them, and thousands and tens of thousands of men and women will go into those temples and officiate for people who have lived as far back as the Lord shall reveal…”

This will be New Zealand’s third temple. Wellington, the capital of New Zealand, is located on the southwestern tip of the North Island. The Auckland New Zealand Temple is under construction and the Hamilton New Zealand Temple is completing renovation. The first New Zealand converts to the Church of Jesus Christ were baptized in 1853. Shortly afterward, missionary work began — including among the native Māori people. Around 115,000 Latter-day Saints live in New Zealand.

Brazzaville, Republic of the Congo

Brazzaville is the capital and largest city in the Republic of the Congo. This will be the nation’s first temple.The Republic of the Congo has over 8,000 members in 29 congregations. The Church has been present in the country since 1990. The temple there will make access to the house of the Lord much easier for members of this central African nation. The Church is growing rapidly in the entire region. There are three temples in the neighbouring country of the Democratic Republic of Congo.

There are more than 61,000 members of the Church of Jesus Christ in Spain. This will be Spain’s second temple. The Madrid Spain Temple was dedicated in 1999. The first Spanish Latter-day Saint joined the Church around 1870. The Church was recognized by Spain’s government in 1968 when missionary work officially began in the country. Today, the Church has about 135 congregations in Spain.

There are more than 190,000 members of the Church of Jesus Christ in the United Kingdom. A temple in Birmingham will be Great Britain’s third. The London England Temple was the first (dedicated in 1958), followed by the Preston England Temple (dedicated in 1998). Missionaries arrived in England in 1837, only seven years after the Church was established. England is home to the oldest continuous congregation of the Church. Today, the Church has 325 congregations in the United Kingdom.

The Cusco Peru Temple will be the fifth temple in Peru. The country is home to approximately 625,000 Latter-day Saints spread throughout more than 775 congregations. Cusco is in the southeastern part of the country and was the capital of the Inca Empire. The first missionaries arrived in the country in 1956. More than 32 million people live in Peru. Other temples in operation or under construction include the Arequipa Peru Temple, Lima Peru Temple, Trujillo Peru Temple and Lima Peru Los Olivos Temple.

Maceió is the capital and the largest city of the coastal state of Alagoas, Brazil. Many tourists visit this port city to see its natural attractions and enjoy its cultural diversity. There are 1.5 million Latter-day Saints in Brazil in more than 2,100 congregations. The temple in Maceió will be the 15th announced temple for Brazil, with dedicated temples located in Campinas, Curitiba, Fortaleza, Manaus, Porto Alegre, Recife and São Paulo. One temple (Rio de Janeiro) is completed and preparing to be dedicated by Elder Gary E. Stevenson of the Quorum of the Twelve Apostles on May 8, 2022. Three other temples are under construction in Belém, Brasília and Salvador. Additional temples have been announced in Belo Horizonte, East São Paulo and Vitória.

Read more about the other temples announced from the Church Newsroom.

Highlights and Personal Impressions for General Conference from Eight Saints
← Previous
The Book of Mormon Video Series Needs You! Urgent Need for Applicants for Season 5
Next →

I live in Madsion Ms. How many members are we supposed to have in order to have a temple build in the state of Ms.