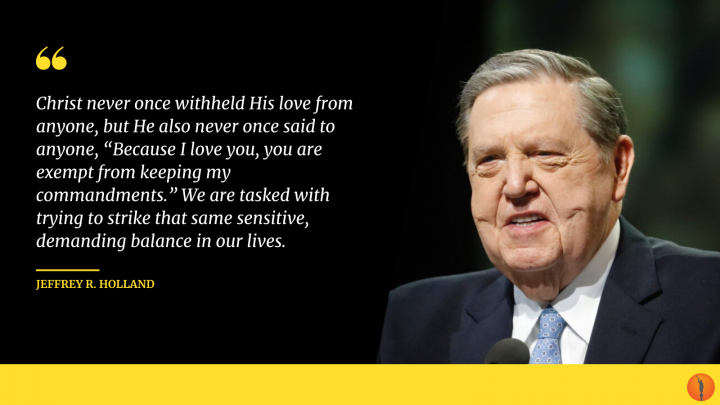 The main theme of Elder Jeffrey R. Holland’s much-referenced talk given at Brigham Young University was an invitation for faculty, staff, and the administration at BYU to show empathy to everyone, while still being devoted to doctrine. Yet some have taken his recent talk to be divisive. They lament that Elder Holland is no longer an “amiable” General Authority, and that his advocacy for revealed truth was somehow an attack on a particular community. Nothing could be further from the truth.

Many are attacking Elder Holland without having listened to or read his speech in full. They rely on secondhand accounts, which fail to account for or address the complexity of his message, or they conflate Elder Holland’s teachings with decades old controversies. When you read or listen to Elder Holland’s talk, his meaning is clear – the revealed doctrine of the church is sacrosanct and should be advocated for, but in our advocacy, we must be careful to avoid contentious behavior. Two paragraphs from Elder Holland’s talk make that message clear. 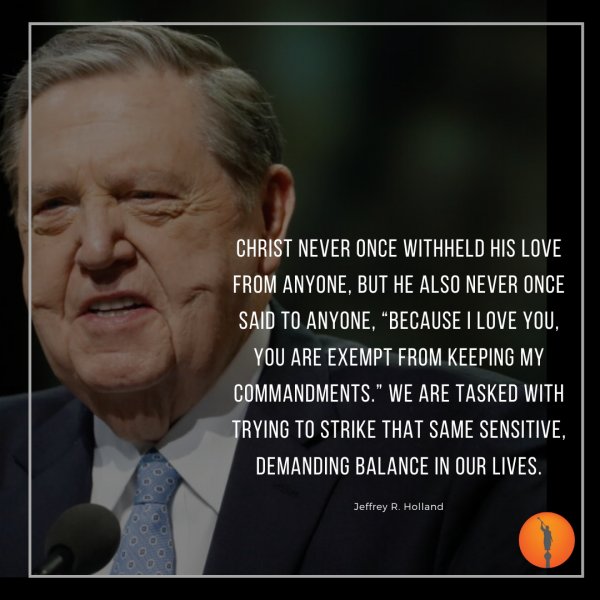 Elder Holland first reminded those at BYU of their main purpose: to not only pass along new secular knowledge, but also the “vital and revealed truths that have been sent to us from heaven.” Brigham Young University is exceptional in that it has both a secular and spiritual mission, both to teach about and discover new secular truths, and to teach about and study revealed truth.

Elder Holland said that there is a delicate balance in advocating for God’s revealed truth. Some don’t understand all of God’s truth and may not agree with the doctrines. We should be careful that “love and empathy (for those people) do[es] not get interpreted as condoning and advocacy” and on the other hand “that orthodoxy and loyalty to principle not be interpreted as unkindness or disloyalty to people.” He continues, “[a]s near as I can tell, Christ never once withheld His love from anyone, but He also never once said to anyone, ‘Because I love you, you are exempt from keeping my commandments.’ We are tasked with trying to strike that same sensitive, demanding balance in our lives.” We must lovingly advocate for the revealed truth. 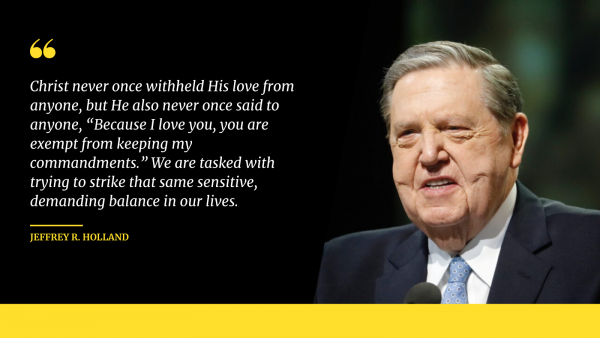 Elder Holland went on to speak out against contention. Those at BYU should never engage in behavior that wounds others. He said “[W]e will always need defenders of the faith, but “friendly fire” is a tragedy — and from time to time the Church, its leaders and some of our colleagues within the university community have taken such fire on this campus. And sometimes it isn’t friendly…There are better ways to move toward crucially important goals in these very difficult matters — ways that show empathy and understanding for everyone while maintaining loyalty to prophetic leadership and devotion to revealed doctrine.” Our defense of the doctrine must never be based in anger or contention. We must be amiable and empathetic with others, but firm in the defense of our faith.

Elder Jeffrey R. Holland is a great example of how to show empathy for others while still being devoted to the revealed doctrine. As he lovingly advocates for revealed truths, he stands firm in the faith, and shows others that the only way to find true happiness and joy is by obeying God’s commandments.

We Thank Thee O God for the Urgent Invitations of a Prophet
← Previous
After the Reaction to Elder Holland's BYU Speech, I Now See Why the Crowd Called for Christ's Crucifixion
Next →

I understand what Elder Holland said, I know the message is clear, Love the person regardless. He would no more ridicule, blame or talk down to a person with any difference from the 'norm' than he would anyone else. In the paralympic games in Tokyo, there were many kinds of differences, they are our brothers and sisters also, but they too are different and not by choice.

EXCELLENT article. President Holland's talk was profound and true. Sadly there will always be those who fall to the adversary's influence in clouding and misconstruing truth when spoken by the Lord's anointed. It began when the Gospel was first restored, and continues now. Simple solution? Prayerfully listen to the teachings of the Lord's anointed, then pray to feel the promptings of the Holy Ghost as he testifies of the truths they taught.

I have not heard Elder Holland's speech yet, but I have heard that he was criticized for it. Without hearing one word of his talk I can, with great confidence, make a statement. Elder Holland would never say or do anything divisive or to hurt anyone. He is the kindest, most loving and gentle man. Every word I have ever heard him utter was spiritual, filled with wisdom and kind. The world we live in today is comprised of people who look for reasons to attack others, even when those attacks are unwarranted. I am certain the negative statements against this dear man were very hurtful to him. Even though I do not know him personally, I have listened to his counsel for decades. My heart hurts for him that he would be so unduly attacked. I pray that he is protected from internalizing this kind of negativity. He is a wonderful General Authority and I always look forward to anything he has to say. For anyone to speak otherwise is extremely shocking to me, as I'm sure it was to many others. He is a beloved leader and I personally look forward to many more years of this sweet man's wisdom.

Thanks for this truthful summary. You focused in on some of my most memorable take-a-ways as well. As you say, IF people with take the time to really LISTEN to Pres. Holland’s tender and love-filled voice as he delivers this ever so important address… it is impossible to find fault! We have needed this strong message for a few years now! Bless him for his spiritual power, testimony, and personal courage to be a mouthpiece for the Lord.