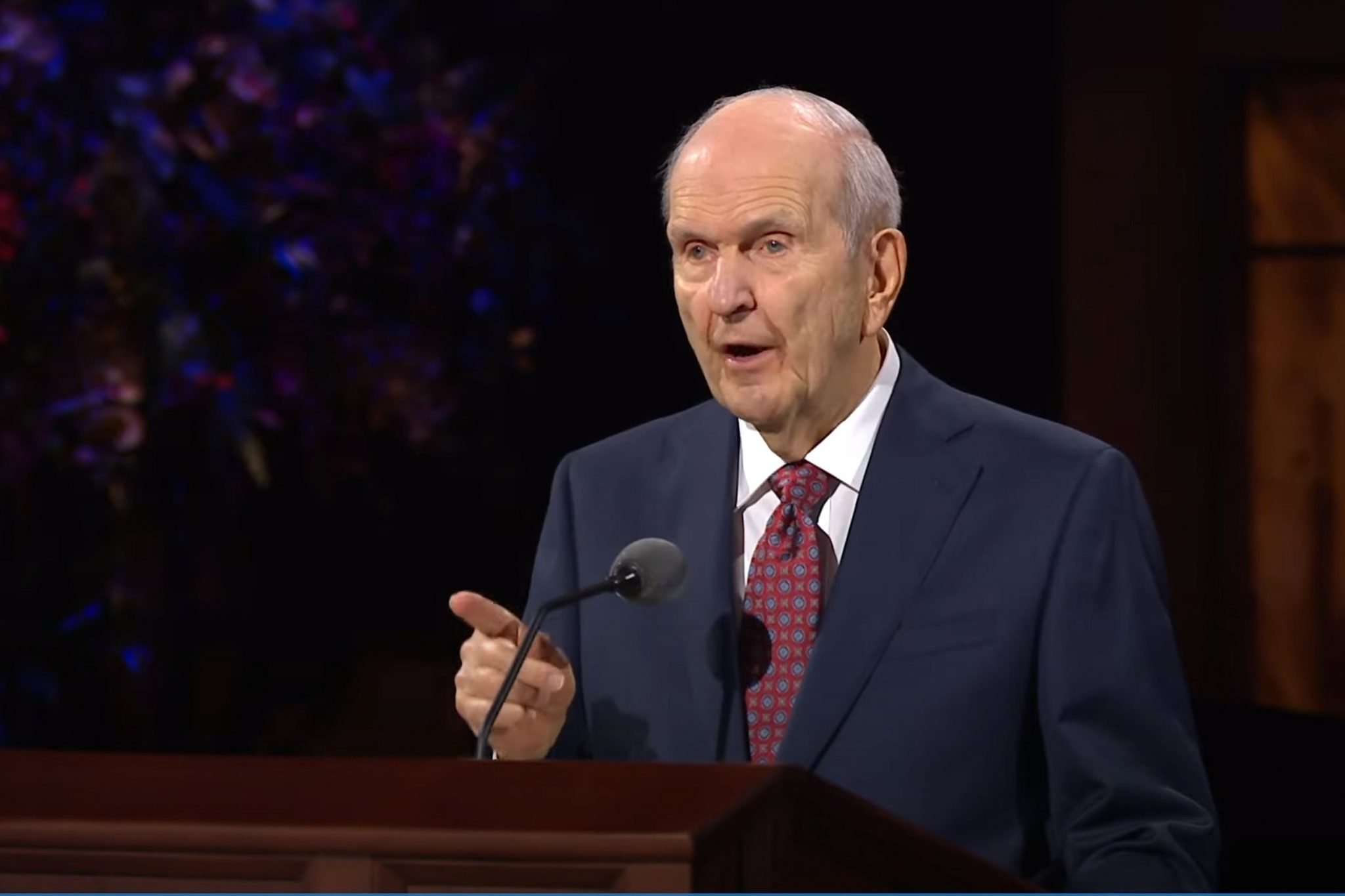 For those who are not aware, in the eyes of a few, President Nelson was apparently way out of line in one of his General Conference talks in April of 2021.

This occurred when President Nelson, in his Sunday Morning address, Christ Is Risen; Faith in Him Will Move Mountains, said the following:

Your mountains may be loneliness, doubt, illness, or other personal problems. Your mountains will vary, and yet the answer to each of your challenges is to increase your faith. That takes work. Lazy learners and lax disciples will always struggle to muster even a particle of faith.

Can you guess which words caused an uproar?

The internet was ablaze with people complaining about his harsh tone and name-calling – for some reason feeling his words were directed at them.

One viewer, Phillip, commented: “Name calling as a prophet of God? Lazy learners and lax disciples? Why would he say that. He should know that this is almost never the case.”

Another viewer, Tim, said: “Calling people lazy learners and lax disciples is not helpful and only increases the stigma with which we treat those who have left the church.”

These are just two examples of many expressing outrage on social media that a prophet of God would call them out (though he never called out any specific group of people as lazy learners or lax disciples).

That Which Ye Call Anger Was the Truth

When Lehi gave his final plea to Laman and Lemuel, one of the topics he addressed was their attitude towards the words Nephi had spoken to them. Nephi called them to repentance, and they clearly didn’t like it. Here was Lehi’s response to their murmuring found in 2 Nephi 1:26:

And ye have murmured because he hath been plain unto you. Ye say that he hath used sharpness; ye say that he hath been angry with you; but behold, his sharpness was the sharpness of the power of the word of God, which was in him; and that which ye call anger was the truth, according to that which is in God, which he could not restrain, manifesting boldly concerning your iniquities.

Laman and Lemuel didn’t like a few things about Nephi’s words:

Nephi also responded to his brother’s allegations that his words were hard against them. He said:

Do not say that I have spoken hard things against you; for if ye do, ye will revile against the truth; for I have spoken the words of your Maker. I know that the words of truth are hard against all uncleanness; but the righteous fear them not, for they love the truth and are not shaken.

The righteous love the truth, and are not shaken.

When President Nelson used the terms lazy learner and lax disciples for those who can barely muster any faith at all, those who make prophets an offender for a word did their thing.

It brings to mind the oft-quoted scripture in 1 Nephi 16:2:

And it came to pass that I said unto them that I knew that I had spoken hard things against the wicked, according to the truth; and the righteous have I justified, and testified that they should be lifted up at the last day; wherefore, the guilty taketh the truth to be hard, for it cutteth them to the very center.

We live in a society where people are afraid to hear the truth. If it doesn’t fit their agenda, it agitates them. If it doesn’t align with “their truth”, they feel attacked and need to find a safe space to hide. If they are told that their effort isn’t good enough, they don’t want to take any responsibility for their actions. Since the prophet is the mouthpiece of the Lord, the fountain of all truth, this invariably causes conflict and contention.

In an address given at Brigham Young University in 1980 by President Ezra Taft Benson titled Fourteen Fundamentals in Following the Prophet, he spoke of the “grand key” of following the prophet. His 12th fundamental states:

The prophet will not necessarily be popular with the world or the worldly. As a prophet reveals the truth it divides the people. The honest in heart heed his words but the unrighteous either ignore the prophet or fight him. When the prophet points out the sins of the world, the worldly either want to close the mouth of the prophet, or else act as if the prophet didn’t exist, rather than repent of their sins. Popularity is never a test of truth. Many a prophet has been killed or cast out. As we come closer to the Lord’s second coming you can expect that as the people of the world become more wicked, the prophet will be less popular with them.

We can expect to see the world’s opposition more and more in the coming years. President Oaks is on the receiving end of plenty of hatred and vitriol, and President Nelson has been getting his fair share recently. Following the prophet, and catching stones that are cast their way in the last days, are just a few of our responsibilities as disciples of Jesus Christ and defenders of the faith.

Clearly President Nelson calling people “lazy learners” and “lax disciples” got some riled up – as they fought back with the argument that he shouldn’t be name calling. While we are on the topic of name calling, do you want to know who else threw around of few zingers to those who needed some correcting? Jesus. Here are a few of the things he said during his mortal ministry to those who were living lives of iniquity.

Obviously, Jesus’ name calling was done with a purpose. He wanted to call out wickedness and hypocrisy, and he also wanted to protect his sheep. It is no different with President Nelson.

His call to lazy learners and lax disciples was a call to repent, to study in faith, and to choose to believe in Christ. Many have humbled themselves based on his words and realized they need to step it up – while others have put up the defensive and taken no responsibility for their lack of action.

President Nelson wants us to discover truth on their own. He doesn’t want people to stop learning and discovering when they hit a speed bump of doubt. His call is for those with doubt to continue believing and continue seeking for truth from the Lord himself. He said:

If you have doubts about God the Father and His Beloved Son or the validity of the Restoration or the veracity of Joseph Smith’s divine calling as a prophet, choose to believe and stay faithful. Take your questions to the Lord and to other faithful sources. Study with the desire to believe rather than with the hope that you can find a flaw in the fabric of a prophet’s life or a discrepancy in the scriptures. Stop increasing your doubts by rehearsing them with other doubters. Allow the Lord to lead you on your journey of spiritual discovery.

Should a Prophet Call People Out?

In an article published by John W. Robbins titled The Virtue of Name Calling, Robbins addresses the misconception that name-calling by a prophet is somehow not within their right as servants of God.

Name-calling, accurately done, is not only not a sin, it is a virtue. It is identifying a person for what he is, and this cannot be done except by doing it. – John W. Robbins

Robbins continues in a charge to Christians to call out those who are wolves in sheep’s clothing.

False teachers must be named, and the pusillanimous habits [showing a lack of courage or determination; timid] of Christians broken. Good etiquette, like peace and unity, must yield to the primacy of truth. Accurate name-calling is a virtue, not a sin. Just as Adam was given the task of naming the animals as an exercise of his rational faculties, so Christians are called upon to identify correctly the false teachers who prey upon the innocent and unlearned.

To those who take offense at his words, know that they are spoken out of love and a desire for you to make positive changes in your life. In a society where nothing is wrong and no one will hold you accountable for anything, be accountable for your actions to the Lord. Admit your weaknesses. Seek repentance. Both steps are a sign of strength and faith. Know that the prophet of God will always point you towards a loving Heavenly Father and a gracious Savior who are ever willing to extend their arms of love and mercy.

Whoever you are, you are part of the problem. Name-calling has no business in any church. If you claim Christ says its OK to do such things who are actually calling out false prophets in the first place, His teachings have been misconstrued or are false altogether. Abuse is not part of God's plan.

What makes a lazy learner? Why must I muster a particle of faith when there are so many facts that I can learn and know instead? See, those of us who left don't need faith. We don't to believe. There are things that we know. And we have earned that knowledge through hard work and effort. It seems to me that the lazy ones are the people who choose not to learn but brainlessly follow with no work whatsoever.

IT never even occurred to me that he was name calling or calling out anyone. Simply stating the answer is always to increase your faith and that takes effort. The opposite holds just as true. I am saddened to see that so many were offended. Even if the Prophet would have called me out by name in General Conference, I would have cried like a baby, then went to work to figure out how to do better. That is just my nature. I will go, and I will do. Always. I sustain our Prophet and all of our leaders 10000%.

When I heard President Nelson say that it never occurred to me that he was “name calling”. If you are standing in a street and someone warns you that a car is coming you don’t get offended….. you check your positioning and move if you are in danger!! I am always grateful for fair warnings, especially from Prophets of God. Thank you President Nelson, and all the General Authorities, for always having my back!!

I find that when people speak up about name calling it is because they know that the truth hit home. They do have choices that they can make. Fight back or stand up and stay yes you are right and do something about it. Maybe they feel guilty for having this pointed out, that they could do better. Maybe it is a way for them to question they church before they leave. We should be thankful that the prophet draws our attention to the fact that perhaps we could do better. I love God and Jesus Christ with all my heart, and I have been lax in reading scriptures and I thank him for letting me know that I need to do better.