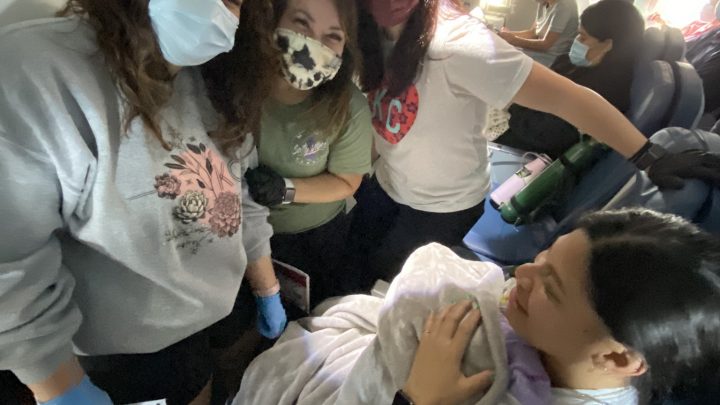 9 shares
KSL.com reported on a story of Lavinia “Lavi” Mounga, of Orem, Utah, who had no idea she was pregnant when she boarded a flight from Salt Lake City, Utah to Honolulu, Hawaii.
“Felt the pressure, and the next moment, I open my eyes and I look down and I really don’t know what I saw, but I put my hand down and I picked it up and it was a baby.”
“Dr. Dale Glenn, a Hawaii Pacific Health family medicine physician, along with Lani Bamfield, Amanda Beeding and Mimi Ho — neonatal intensive care unit nurses from North Kansas City Hospital — were also on board and helped deliver Raymond Mounga at just 27 weeks,” KSL.com shared.

“I had a completely miraculous experience on Wednesday. In the middle of our Delta Flight 306 from Salt Lake City to Honolulu, I was called to assist in the delivery and resuscitation of a 29 week old baby when mom (who did not actually know she was pregnant, yes, this does happen) suddenly went into labor. 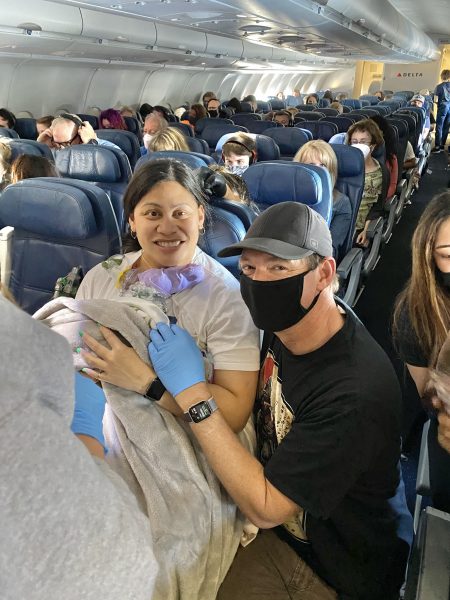 Astoundingly, there were not one but three NICU nurses on the plane from Kansas City who rushed to help Mom, who delivered in the airplane at 40,000 feet over the Pacific.

We used shoelaces, a sock (for a head warmer), plastic bags, microwaved water bottles (to raise temperature), an Apple Watch (which worked surprisingly well as a heart monitor),and an oxygen mask we made ourselves to get baby stabilized, keep him warm, and help him breathe until he was safe enough to wrap him against mom’s chest. We finally reached Honolulu three hours later.

The pivotal moment came when after landing we moved mom and baby into a wheelchair and he finally woke up and for the first time cried out loud. The whole plane applauded. There have only ever been about 60 babies born on flights in recorded history.

What are the odds this three pound preemie would have 3 neonatal intensive care nurses, a physician’s assistant, and one semi-experienced doctor on board to help him when he decided to make an appearance in the middle of the Pacific Ocean?

Our Delta crew was also amazing. My daughter Katheryn got to help name him. Mom and baby doing well in Honolulu. God watches over all of us.”

Congratulations and continued blessings go out to Lavi and her new delivery!

A Silent Interview: What Would You Say to the Savior if He Entered the Room Right Now?
← Previous
The Modern Day Plague that is Attacking the World and the People of the Lord's Church
Next →

@Deb, Must be plenty of women walking around who have no idea what is going on in their bodies. Not going to apologize. I'd like to meet this woman and question her to find out exactly how she didn't know she was pregnant.

@Rozy, If “body awareness” is what you’re using to measure the competency of a person you need to check your awareness speaking on a subject you know nothing about. She had a cryptic pregnancy and experienced no symptoms of nausea, no fetal movement, and no differences with her body other than a few pounds of weight gain which can happen for other reasons. So her “body awareness” was fine, thank you. And she is going to be an amazing mother despite your ignorant and demeaning judgement of her.

@Rozy, That's a terrible thing to say. I've heard of women not knowing their pregnant lots of times & 29 weeks is still pretty early. You have no right to judge her as a mother just because of this one incident. Especially if this is her 1st pregnancy. How do we know? There is always 2 sides of the story. I think this is beautiful & clearly God's hand was in the details of her life. Please apologize for your insensitive comment.

This cant be true, how can she be pregnant for such a long time and will not know about. I don't believe this!!!

@Maxwell, I have a cousin (who was adopted) had a baby not knowing that she was pregnant. Her mother (my aunt) who never had children thought that my cousin was just gaining weight. So yes it does happen!

@Rozy, many who suffer from irregular menstrual cycles often don’t know they are pregnant. Some people also have regular cycles and are pregnant. You need to apologize for your insensitive comment.