What if the Sword of Laban Was on Your Kitchen Table? With Augmented Reality, It Can Be 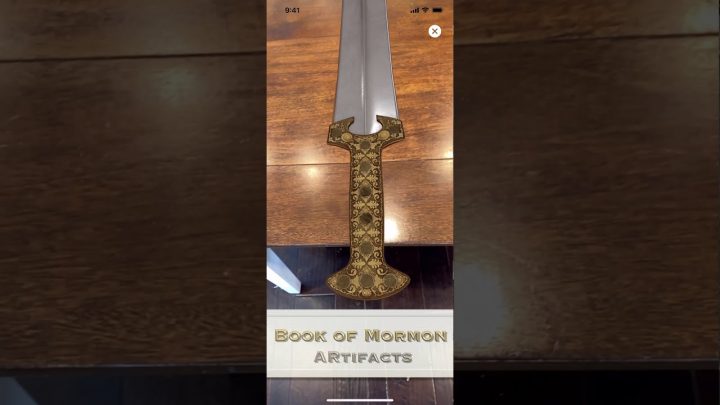 Hey everyone, my name is Danny! I’m a husband, father of three, entrepreneur, fitness enthusiast, and tech goob. I made an app called Gospel ARtifacts. It’s an augmented reality or “AR” app (hence the capital “AR” in ARtifacts).

Gospel ARtifacts allows you to take objects and artifacts from the scriptures or Church history and using the camera in your smartphone, digitally place them on real-world surfaces like your table or floor. If you’re already itching to get the app after that intro, here’s a link. It’s free to download. I’ll put a link later too.

WHY DID I MAKE THE APP?

So, why did I make the app? For one I love The Church, the scriptures and gospel related stuff. Another, is that I really love technology, what it’s capable of, and its ability to reach lots of people. It’s taking over in a lot of ways and I wanted to use this new technology for helping build faith. Also, I felt almost compelled to create the app! I wasn’t sure if I’d talk about this or not, but I decided to, and you can read about that a bit further down.

My patriarchal blessing also talks about me becoming a powerful teacher and having great influence upon the youth, something I still see as a future event (and have often felt skeptical about), but that certainly played a part in my desire to make the app. I’ve had the idea for this app since mid-2017 when Apple announced their ARKit 1 platform for making augmented reality apps. I started half-heartedly gathering information for the app back then, but never really thought I’d do it. I wasn’t a programmer. I didn’t know how to code How was I going to make an app?

The 3D objects are really memorable and they leave an impression on people. I’ve also included lots of free learning resources for each object. As you move around the app, look at the 3D objects, watch some videos and read some articles, you’ll see the connection the 3D objects have to happening in the Scriptures. THEN when you look at the objects again, it’s almost as if you see them with new eyes. They become like an anchor point or a visual cue for the new things that you learned in the study resources and it helps you to remember those new things! 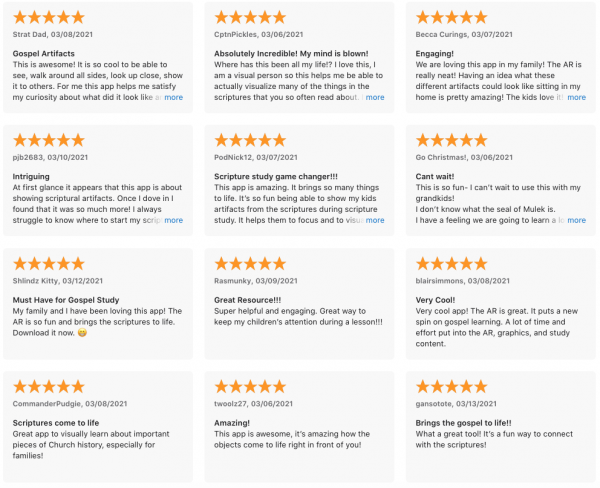 WHAT DOES THE APP DO?

The app lets you point the camera in your phone at a surface, and then after scanning the surface you can place objects from the scriptures or Church history on that surface. You can place the Golden Plates or the Ark of The Covenant or many other objects into your real-world space and then you can: 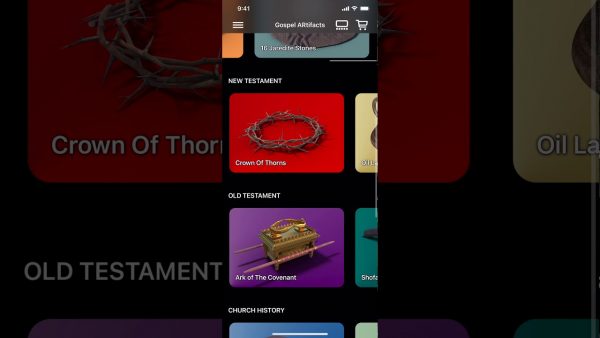 It is probably most comparable to a hologram in the way it appears in your vision in 3D and how the object stays in a stationary location while you move around. The “ARtifacts”, as I call them, are quite realistic looking and although most are artistic interpretations, they have been made as accurate as possible with the information I gathered. I do plan to tweak and update the objects over time to add new details or simply improve them as the technology advances. For example, I have a new and improved set of Golden Plates that are getting close to completion. As well as a few other cool things in the works that I won’t mention now.

The app is pretty cutting edge, and honestly a bit trippy for your brain because it can make you feel like the object is really there in front of you. I can’t say how many times I’ve been looking at a scripture object in augmented reality in Gospel ARtifacts and then put my phone down or moved my camera out of view of the object (which stays pinned to a stationary location on the surface) and had a split second of surprise/fear because my brain made me think I had lost the ARtifact! The AR is that convincing! I’ve watched it happen lots of times with other people testing out the app before I released it, too.

If this isn’t making sense, hopefully this 30 second video will help. It’s a vertical video that will fill your entire phone screen if you watch it on your phone. There’s nothing like experiencing it in AR for yourself though.

Wanna try it for yourself? Follow the link to download the Gospel ARtifacts app for free on the Apple App Store. All curated study materials are free and several 3D objects can be unlocked for free as well.  It’s currently available for iPhone. iPad support should be coming within a few months. Then I’m hoping to be able to bring it to Android after that.

HOW DID I MAKE THE APP IF I WASN’T A PROGRAMMER?

As you probably remember, I said I didn’t know how to code. So how did I make an app? Did I learn how to code on the side and build the app in my spare time in the evenings after work? I wish. I already worked a desk job that was quite stressful with long hours, and by the evening I was usually exhausted and couldn’t keep putting in extra time at the computer to learn. It was just bad for my body! I tried this at first, but it didn’t last very long. I knew I wouldn’t ever learn to code and get the app created like that. It just wouldn’t become a reality if I kept on the course that my life was on at the time.

In the spring of 2017, my wife’s dad passed away very unexpectedly. We got a call saying he was being taken by ambulance from where he had been at work. Our family and my wife’s siblings and their families all rushed to the hospital to see him and to be with my mother-in-law, but by the time we got there he had already passed away. Crazy, strange, and surreal day.

My mother-in-law’s Bishop (who I didn’t know prior to this time) gave blessings to everyone in the ER room as we sat there gathered around my father-in-law’s body. The blessing given to me was recorded and is on my computers main screen with all my files.

Among other things, the blessing talked about the ongoing influence of my father-in-law in my life and said that I would be blessed as I made decisions in my life regarding careers and supporting my family. I wasn’t looking for a new job at the time. I was actually quite firm that I was going to be staying where I was. We had been working towards a big financial goal for many years and would be achieving it within a few short years. Fast forward a few months and I learned about Apple’s new AR technology and started half-heartedly gathering ideas for this app.

Fast forward a year or so more and I was at home working in my office. The usually fast-paced and hectic work calmed down and I had a while where it was quiet. The things usually pulling at my attention weren’t really present. I’m a bit hesitant to share this because it will probably sound weird but I was at my standing desk working on my keyboard and it felt like someone was in the room behind me. I knew nobody was there, but I looked around anyways. Nobody was there.

What I felt when I received (but didn’t hear) that message was that I needed to move on from my current job and on to the “Gospel ARtifacts” app idea that I had. In my mind at least, to help people get excited about, and involved in the scriptures more, and to strengthen the faith of especially the rising generation in the Restored Church of Jesus Christ.

I struggled with that. I wanted to hit our financial goal (my wife did as well) and build the app on the side. But it just wasn’t possible with the job and life situation I had. So, after a year and a half of fighting it, putting it off and debating it with myself, my wife and I decided to have me put in my notice at work. To quit my job, take a large financial risk and start working on the app full time with no knowledge of how to make it – for me, that was a leap of faith. Not to mention that it was a few months before the pandemic hit, which was a bit of a curve ball.

I started learning to code, looking for a 3D designer and just got to work. It was just shy of 16 months from when I quit my job before I finally finished the app and released it (about 7 months longer than I anticipated). It was a slow process, but I just kept moving forward. I felt like I was given the knowledge that I needed just at the right times to bring each piece of the app together every step of the way. I took a lot of coding courses and practiced a lot, but my efforts were pretty divided pulling together all the pieces of the app. I just kept moving forward trusting that I would be led to bring it all together, and here it is.

It was a joy to build, albeit frustrating at times. I have lots of upgrades in the works. Updates to existing 3D objects, new 3D objects to be added to the app, etc. My hope and prayer are that Gospel ARtifacts will help build faith and strengthen testimonies of Jesus Christ and His Restored Gospel across the globe. Let’s get you connected to the scriptures in a new way. Check out the app at this link.

If you love it, please share it with the people in your circles so they can enjoy it too and see all the cool things that are in the app and coming in the future! You can also find other ways to connect with me at the bottom of my website at https://www.gospelartifacts.com

New Major Motion Picture, MISSION STORIES, Launches Ambitious New Media Franchise
← Previous
Have You Ever Considered the Backstory of the Thieves in the Story of the Good Samaritan? The Chosen Has
Next →

I can’t wait to share this with our kids and grandkids! Thank you for creating this!