Elder Holland’s Advice on Failing to Forgive and Forget 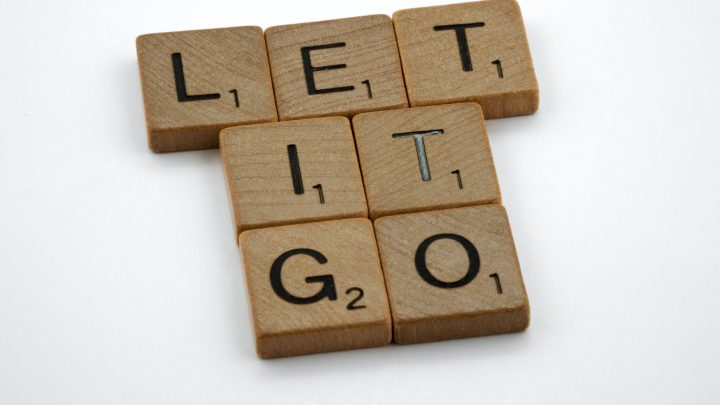 Failing to forgive and forget is spiritually harmful. The philosopher Anne Lamott said, “not forgiving is like drinking rat poison and then waiting for the rat to die.”

Obviously, that is a recipe for disaster, but for many years, I chose to not forgive or forget.

I had a close childhood friend I’ll call Emmett. Emmett and I were inseparable: playing together at each other’s houses, attending school together and going on outings together.

As we reached our teenage years, Emmett and I grew apart. He made new friends, many of whom were kids that I didn’t want to hang around with. Something happened, and Emmett began to treat me unkindly. When he was around certain friends, that unkind behavior turned into bullying. 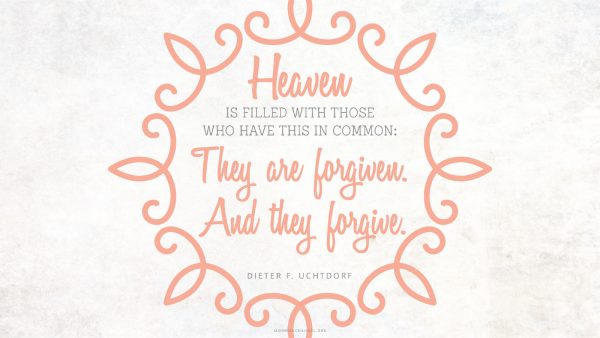 When I walked home from school, Emmett, who was a year older, a foot taller and about 30 pounds heavier, would often follow me in his pickup truck and yell insults at me with his new friends. One time, his friend got out of the truck and chased me all the way to my house. Thankfully, I was on the track team.

Another time, Emmett and a friend chased me when they found me alone at the beach. I had to run into the woods and hide under a bush, while his friend yelled threats at me while stabbing a tree with a knife.

At school, another friend of Emmett would constantly berate me at the end of gym class, trying to get into a physical fight with me in school, so I would get suspended. That went on for the entire year. 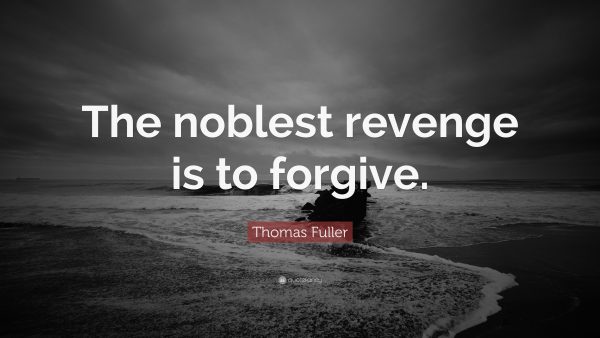 The bullying got so bad that some days I didn’t want to go to school. I would pray that I wouldn’t cross paths with Emmett or his friends in school that day, and I would choose long meandering routes to get to my classes just to avoid them.

After several torturous years in high school, I left for college in another state. Years passed. I got married and started a career, only returning home for my father’s funeral. Emmett, now a full-grown man, came to my father’s wake and funeral. By this time, I was a few inches taller than him. He was extremely kind and pleasant to me and my family, and I was very respectful to him, but inside, I harbored deep resentments for his earlier treatment of me.

What confused me was that it was clear that Emmett didn’t have any bad feelings for me. He seemingly didn’t remember any of his past behavior. He wasn’t burdened by any of his actions, probably because they didn’t affect him the way they affected me. I was a scared and traumatized kid, but he probably didn’t mean anything by his actions, and much of the bullying was done by Emmett’s friends. He was probably just messing around and didn’t give his behavior of the behavior of his friends a second thought, but I still couldn’t forgive him. 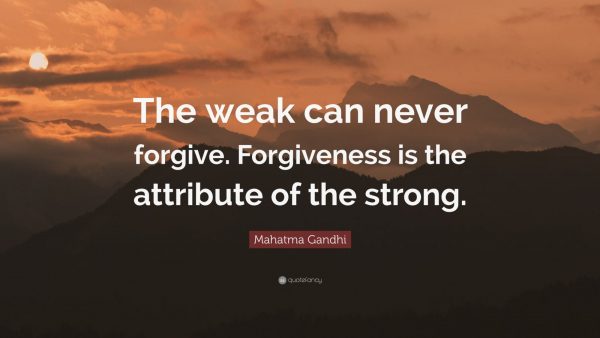 About ten years ago something changed, I read a quote by Elder Holland that explains why failing forgiving others is so bad. In a talk entitled “The Best is Yet to Be, he writes, “There is something in many of us that particularly fails to forgive and forget earlier mistakes in life—either our mistakes or the mistakes of others. It is not good. It is not Christian. It stands in terrible opposition to the grandeur and majesty of the Atonement of Christ. To be tied to earlier mistakes is the worst kind of wallowing in the past from which we are called to cease and desist.”

There are many physical benefits to forgiving others. According to Johns Hopkins, people who practice forgiveness have lower blood pressure, have a lower risk of heart attack, lower cholesterol, improved sleep, less pain, less “anxiety, depression and stress.” Who wouldn’t want better physical health?

There are also spiritual benefits to forgiving and forgetting. Elder Holland says, “When something is over and done with…, when life has moved on as it should and a lot of other wonderfully good things have happened since then, it is not right to go back and open some ancient wound that the Son of God Himself died to heal. Let people repent. Let people grow. Believe that people can change and improve…. If something is buried in the past, leave it buried.” When we let go of the past, the Atonement reveals to us a brighter future. “Faith builds on the past but never longs to stay there. Faith is for the future.”

As I pondered on Elder Holland’s words, I realized his wisdom. I was the only one suffering for what I considered Emmett’s past wrongs. I needed to leave it buried in the past and look to the future. 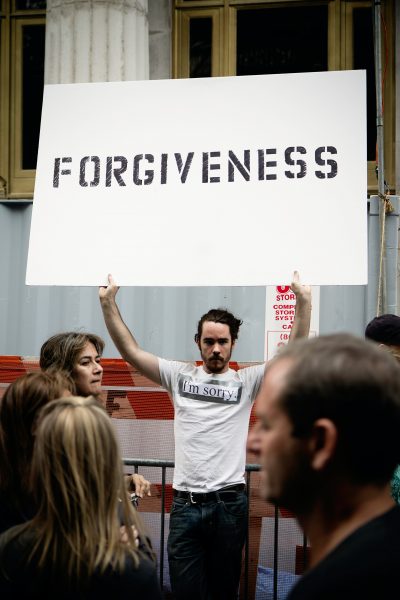 Many years have passed since this small epiphany. I have since renewed my friendship with Emmett, and I have learned a lot from him. He is a leader in his community, he has many friends. He is a good husband and father and a hard worker. He was always a good kid, but now he has grown, changed and improved and he is a great man.

I have benefited from my continued interactions with Emmett. He has been a great help to my family in times of personal tragedy and is currently a source of inspiration for me.

The best thing about forgiving and forgetting is that I am no longer burdened by the past. Rather than dwelling on negative memories, I’m building positive ones. Once I was able to forgive and forget those aspects of my painful past, I was able to faithfully focus on the future and recognize that the best is yet to come.

This was great. Thank you for telling this experience. I think forgiveness is key and a commandment. I believe we must forgive, but forgiveness is not something we are called upon to do. Should we forget that someone once defrauded us or abused us? I would point out that having the recall to write this article and catalog the things forgiven is demonstrative of the impossibility of forgetting. That is not commanded or expected. Forgiveness is enough and well worth it.

I can’t believe I am sharing this. I have kept it hidden. I was molested as a child by two neighbor boys who were brothers. My playmate was their niece. After the first time it happened I didn’t understand what happened but I felt very sick inside. At the age of 6-7 and not a member yet (non member family), I was never going into that house again when they were there. Well, my playmate called me and asked me to come play. I asked her if her uncles were home and she said they weren’t. I felt safe and went there to play. As we turned to go upstairs to her to her room to play they grabbed me in the stairwell. Awful things happened to myself and my playmate and I have eventually forgiven them but I haven’t forgiven myself for going back there again and being tricked. I blame myself for being so stupid and naive. They showed me a gun and did the if you tell anyone threat. I kept this hidden until I was getting serious with my now husband of 44 years. I remember telling him as we spoke of marriage that their may be things I would not be comfortable with. He was and is great and still is. I have prayed and prayed about this and taken it to the temple to have me not think of it. I’ve also had counseling but it always comes back. :(

We are told to forgive. We are not given a specific time frame on which to forgive. It took me 10 years to forgive a former boyfriend that abused and manipulated me, but I knew I wanted to, for my sake. The analogy of the rat poison is dead-on, and I did not want to give him any more power over me. I told myself and the Lord I would get there. I did. If I ever see him again, I will be sincerely kind. Will we swap phone numbers and become social media friends? No. Forgiveness, in my case, just means an unpleasant part of my history is over.

@Lexa Graeme, One interesting thing for me was seeing things though my bully's point of view. When I was able to step back from the pain I felt, and try to look at things more antiseptically, I was able to let go of even more of my past hurt.

how does one forgive and forget when the pain is so great?

@Lynne Norris, You also can remember that forgiving someone does not mean that you have to be their buddy. Sometimes things happen that are really terrible and the people involved are not sorry or have no intention to change. Yes, we still forgive them because their sins are paid for by the Savior. If they don't repent that is between the Savior and them. Our forgiveness of them is for OUR benefit, not necessarily theirs. WE don't decide if someone deserves forgiveness. That is not our job. We are required to forgive because the Savior commanded us to do it, otherwise it remains in us the greater sin. But forgiving does not mean we have to associate or be close to someone who is negative in our lives. There are situations when it is ok and appropriate to forgive from afar. Then we just need to remember to put the situation into the Savior's hands. He can and will heal all things.

@Lynne Norris, that great pain can be relieved-but only through Christ. I know it’s true. I turned that burden of judgement over to Him who knows the beginning from the end. I asked Him what He wanted me to learn and how forgiving would help me? He answered those prayers and it allowed me to give up anger and pain. It seems sometimes-if we aren’t careful we can almost become addicted to negative emotions and the responses from others that we can elicit. The addiction recovery program through the church can be of great benefit. Trust Heavenly Father snd Jesus Christ-they don’t want you to be in pain-especially when you can allow them to help you and the other or others involved heal.