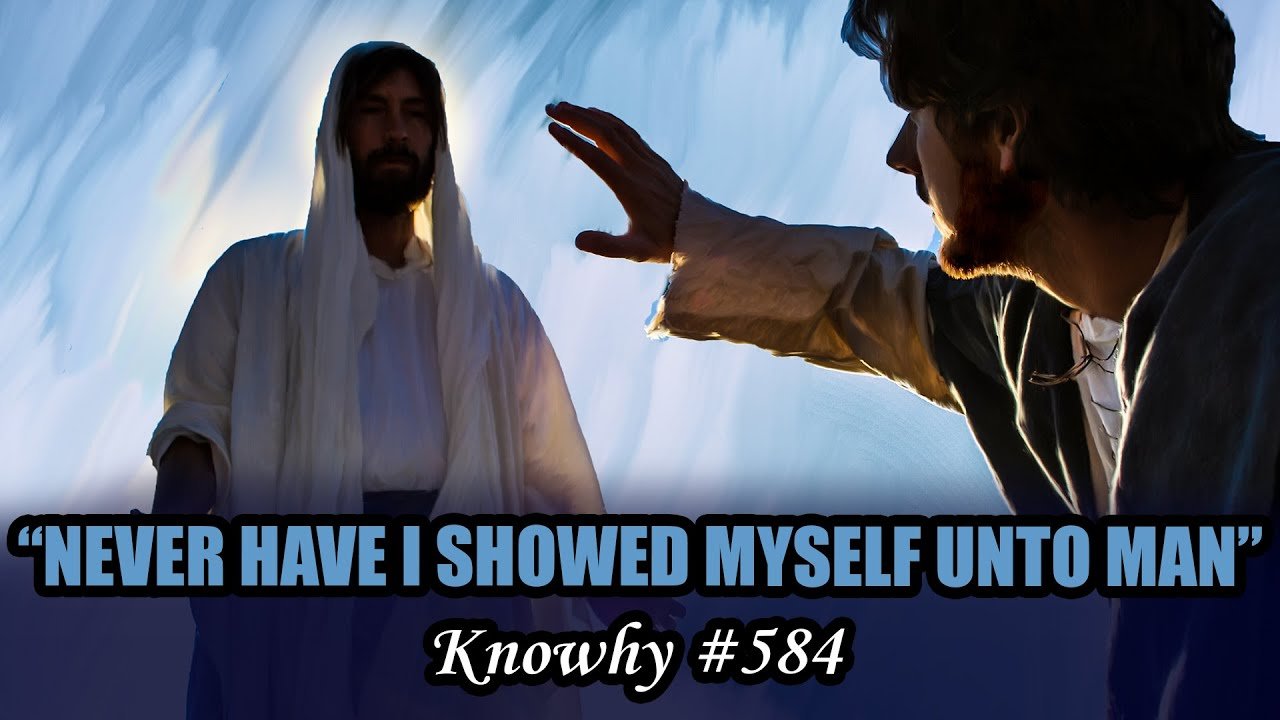 View this article on Book of Mormon Central

The Book of Mormon contains an exceptional account of Jesus Christ revealing himself to the brother of Jared.

Regarding this sacred encounter, Jesus declared, “never have I showed myself unto man whom I have created, for never has man believed in me as thou hast.”

This statement has perplexed some readers because there is scriptural evidence that righteous individuals who lived before the brother of Jared had in fact entered into the Lord’s presence.

That being the case, what could Jesus have meant? Over the years, various interpretations have been proposed.

What starts out in Ether 2–3 as a question-and-answer session about how to build ocean-worthy barges ends with Jesus Christ revealing Himself to the brother of Jared in an extraordinary theophany.

Consistent with a pattern found in ancient temple worship, the Lord first revealed only part of His body (His finger) from behind the veil and then afterward His entire premortal personage (see Ether 3:6–13).1

Regarding the significance of this sacred encounter, Jesus declared, “never have I showed myself unto man whom I have created, for never has man believed in me as thou hast” (v. 15).

This statement has perplexed many readers and scholars of the Book of Mormon. Does it mean that none of the righteous men and women who lived before the brother of Jared were visited in person by Jesus Christ?

While straightforward, this interpretation doesn’t seem possible because there is scriptural evidence that prophets who lived before the brother of Jared, such as Enoch, had in fact entered into the presence of the Lord (see Moses 7:4).2

That being the case, what could Jesus have meant? Over the years, various possible interpretations have been proposed.3

A Matter of Degree

Some commentators, including Joseph Fielding Smith and Bruce R. McConkie, have understood that Jesus revealed Himself in a unique manner or to an unprecedented degree when speaking to the brother of Jared.4

Never have I showed myself in the manner and form now involved; never has there been such a complete revelation of the nature and kind of being I am; never before has the veil been lifted completely so that a mortal man has been able to see my spirit body in the full and complete sense of the word.5

The Meaning of “Man”

Sidney B. Sperry suggested that the word man in Ether 3:15 may be a collective description of mankind, the vast majority of whom haven’t attained faith like unto the brother of Jared.6 In other words, “never have I showed myself unto [mankind, collectively speaking] whom I have created, for never has [mankind] believed in me as thou hast” (Ether 3:15).7

A collective understanding of “man” may be warranted by looking back at a distinction made in verse 14. In that verse, Jesus declared that in Him “all mankind will have life,” but He seems to clarify that only those who have faith “become my sons and my daughters.”

Concerning these statements, Bruce K. Satterfield has commented, “To me, this distinction seems to indicate that God appears to his sons and daughters but not to man.”8

Jesus as “the Son”

Kent P. Jackson has proposed that when Jesus appeared to other individuals before the brother of Jared, He appeared only as Jehovah, in His capacity as a representative of the Father.

Yet, when showing Himself to the brother of Jared, He may have come specifically as Jesus Christ, in His capacity as the Son.9

Lending support to this possibility is that Jesus drew attention to this dual aspect of His identity in the immediately preceding verse: “Behold, I am Jesus Christ. I am the Father and the Son” (Ether 3:14; emphasis added).

One advantage of this interpretation, according to Jackson, is that it avoids the ambiguity of some other approaches, allowing readers “to take the Lord’s statement literally as it stands.”10

Daniel H. Ludlow felt that it was the brother of Jared’s unprecedented faith that was so unique in this circumstance. It isn’t that the Lord hadn’t previously shown himself to individuals, but that He “never had to show himself unto man before.”11

Among the various possible interpretations of Ether 3:15, Elder Jeffrey R. Holland found this one to be the “most persuasive”12:

As a rule, prophets are invited into the presence of the Lord, are bidden to enter His presence by Him and only with His sanction. The brother of Jared, on the other hand, stands alone then (and we assume now) in having thrust himself through the veil, not as an unwelcome guest but perhaps technically an uninvited one. …

Obviously the Lord Himself is linking unprecedented faith with this unprecedented vision. If the vision is not unique, then it has to be the faith—and how the vision is obtained—that is so remarkable. The only way this faith could be so remarkable would be in its ability to take this prophet, uninvited, where others had only been able to go by invitation. 13

These and other possible interpretations are not necessarily mutually exclusive. As Elder Holland suggested, “any one—or all—of which may cast some light upon the larger truth of this passage.”14 At the same time, it should be understood that none of these interpretations is yet proven.

Without the clarification of “additional scriptural revelation or commentary on the matter,” cautioned Elder Holland, “any conjecture is only that—conjecture—and as such is inadequate and incomplete.”15

Still, the very act of pondering upon the potential meaning and significance of Ether 3:15 can be enlightening. Readers might meaningfully ask why Moroni included this episode in the first place.

What about it was so important that he spent nearly an entire chapter discussing it, while other parts of his abridgment cover entire generations of Jaredite history in only a few verses?

An important clue may be found in the next chapter (Ether 4), where Moroni recorded the Lord’s invitations to latter-day Gentiles. The brother of Jared lived before Abraham, Isaac, and Jacob and in a different part of the world. Thus, like the Gentiles, he was not of the house of Israel, and yet the Lord still offered him this profound privilege and blessing.

With their shared non-Israelite status in mind, the brother of Jared can be seen as a particularly apt model of righteousness for modern-day Gentiles.16

The unique revelation given to this unassuming man demonstrates without question “that God is no respecter of persons” (Acts 10:34), and that He indeed “inviteth them all to come unto him” (2 Nephi 26:33).

It also proves that God’s invitation to “Come unto me” is not merely figurative (Ether 4:13–14). Jesus is inviting all of us—both Jew and Gentile—to literally come into His presence.

Whatever it means in Ether 3:15 that the Lord had never previously shown Himself unto man, we can be confident that going forward the heavens will be open to all who, like the brother of Jared, are able to “rend that veil of unbelief” (Ether 4:15).

2.Elder Jeffrey R. Holland has explained this dilemma in detail: “The potential for confusion here comes with the realization that many—indeed, we would assume all—of the major prophets living prior to the brother of Jared had seen God. How then does one account for the Lord’s declaration? Adam’s face-to-face conversations with God in the Garden of Eden can be exempted because of the paradisiacal, prefallen state of that setting and relationship. Furthermore, other prophets’ visions of God, such as those of Moses and Isaiah in the Bible, or Nephi and Jacob in the Book of Mormon, came after this ‘never before’ experience of the brother of Jared. But before the era of the Tower of Babel, the Lord did appear unto Adam and ‘the residue of his posterity who were righteous’ in the valley of Adam-ondi-Ahman three years before Adam’s death (see D&C 107:53–55). And we are left with Enoch, who said very explicitly, ‘I saw the Lord; and he stood before my face, and he talked with me, even as a man talketh one with another, face to face’ (Moses 7:4). We assume there would have been other prophets living in the period between Adam’s leaving the Garden of Eden and the building of the Tower of Babel who also saw God in a similar manner, including Noah, who ‘found grace in the eyes of the Lord’ and ‘walked with God’ (Genesis 6:8–9), the same scriptural phrase used to describe Enoch’s relationship with the Lord (see Genesis 5:24).” Jeffrey R. Holland, “Rending the Veil of Unbelief,” in A Book of Mormon Treasury: Gospel Insights from General Authorities and Religious Educators, (Provo and Salt Lake City, UT: BYU Religious Studies Center and Deseret Book, 2010), 59.

7.Perhaps this is similar to the Lord’s statement in 3 Nephi 15 that “the Gentiles should not at any time hear my voice—that I should not manifest myself unto them save it were by the Holy Ghost.” Collectively speaking, this statement is true. Unlike the Jews in Jerusalem, the Nephites in the Americas, and the other scattered tribes of Israel (see 3 Nephi 15:12–16:3), the Gentiles have never been privileged to receive the personal ministry and witness of Jesus Christ. Yet righteous individuals among the Gentiles, such as Joseph Smith, have unquestionably seen and heard Jesus Christ, as the brother of Jared did. This interpretation of Ether 3:15 is contextually noteworthy because in the very next chapter the Lord explained to Moroni: “in that day that [the Gentiles] shall exercise faith in me, saith the Lord, even as the brother of Jared did … then will I manifest unto them the things which the brother of Jared saw” (Ether 4:7).

8.Bruce K. Satterfield, “‘Never Have I Showed Myself Unto Man’: Dealing With the Apparent Incongruity of Ether 3:15 and Earlier Appearances of the Lord,” original, unedited draft copy, online at emp.byui.edu.

9.See Jackson, “‘Never Have I Showed Myself Unto Man’,” 73–75. As concluded by Jackson on page 75: “The uniqueness of this situation lies in the fact that Jehovah appeared to [the brother of Jared] in his role as Jesus Christ—rather than as the Father. Never before, as far as we can tell from the scriptures, had Jesus Christ shown himself unto man. (And, interestingly, nowhere else in the scriptures do we have a clear example of Jehovah appearing as Jesus until his coming in the flesh.) As Moroni reported, ‘Having this perfect knowledge of God, he could not be kept from within the veil; therefore he saw Jesus’ (Ether 3:20). To the brother of Jared, Christ revealed his complete nature: God who would become Man—Jehovah, the Father, who would become Jesus, the Son.”

11.Ludlow, A Companion to Your Study, 318; emphasis in original.