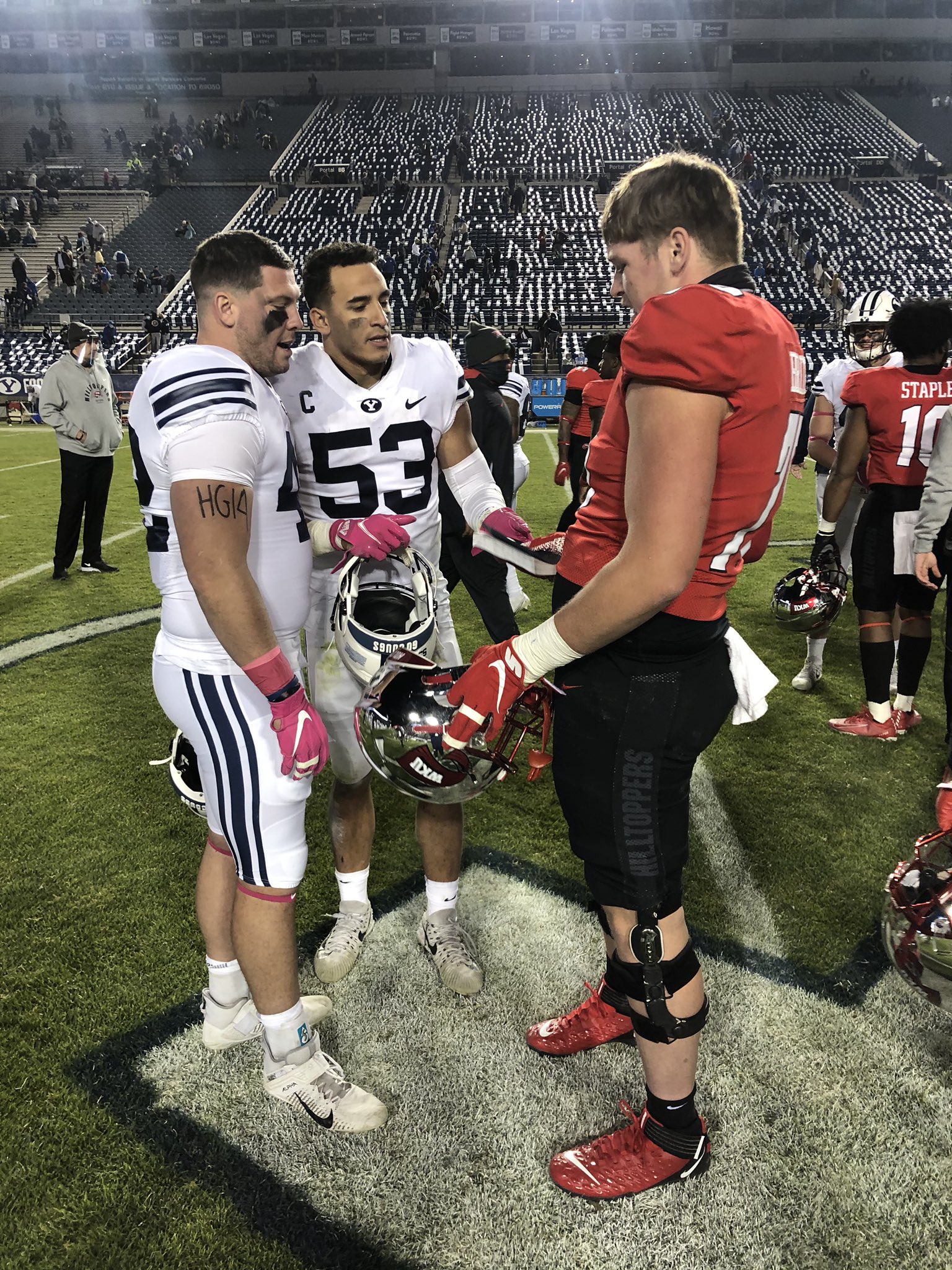 In the Bronco Mendenhall era, football wasn’t the only thing the head coach of the BYU football team was engaged in.

Coach Mendenhall believed that BYU Football was one of the greatest missionary tools for The Church of Jesus Christ of Latter-day Saints.

He would be proud of the missionary work that was done on the field after BYU’s 41-10 victory over the visiting Western Kentucky squad, as our the current BYU staff and coaches. 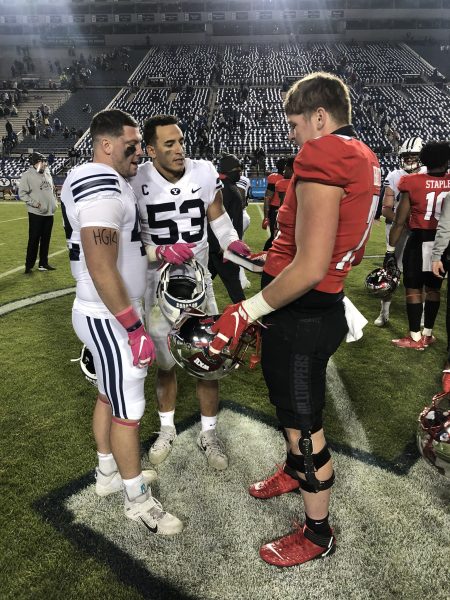 Isaiah Kaufusi and his teammate Kyle Griffitts present a Western Kentuck football player with a Book of Mormon after BYU’s 41-10 victory over the Hilltoppers.

Damuni posted this picture on Twitter after the game with the following caption:

I was fortunate to catch this priceless scene between Isaiah Kaufusi and Kyle Griffits, giving this player from Western Kentucky a Book of Mormon after the game and sharing their testimonies of the gospel. I love our boys, they’re great examples to the world.

As iconic as this picture is, it does beg the question, how in the world does this happen?

One BYU football fan, byumusty, asked just that on Twitter when he said: “Amazing! How did they even get to that conversation? Just handing them out, or are these bits asking questions?”

As luck would have it, tight end Kyle Griffits caught wind of this Jack Damuni tweet which has garnered over 2,200 likes and close to 500 retweets. Kyle, of course, was by Isaiah Kaufusi’s side in the picture.

Kyle’s response to what happened?

“They had questions throughout the game so Isaiah grabbed me and said “Hey, two by two, come help me out with something”.” 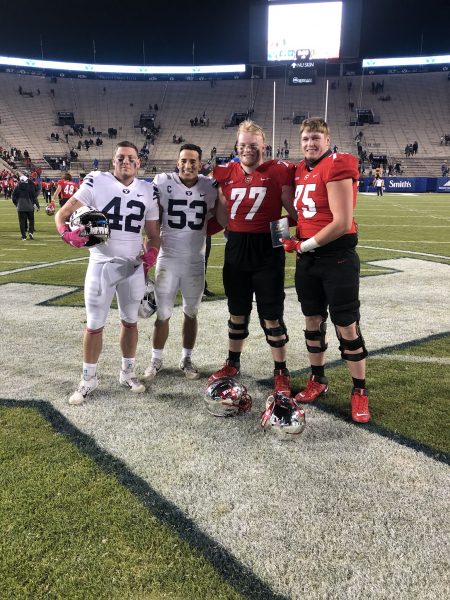 A website covering BYU sports, Vanquish the Foe, reached out to the Western Kentucky player who was asking about the Latter-day Saint religion.

His name is Gunner Brinton and according to Vanquish the Foe reports he said, “We were just talking during the game and I wanted to learn more of their faith. They were great guys.”

With all of the current divisiveness in our society, it’s great to see people coming together, even on opposite sides of the football battlefield.

Much respect to Isaiah Kaufusi who was ready with a Book of Mormon, and to Kyle Griffits who answered the call to be his impromptu companion.

I was fortunate to catch this priceless scene between @isaiah_kaufusi and @kgee42 giving this player from Western Kentucky a Book of Mormon after the game and sharing their testimonies of the gospel.
I love our boys, they’re great examples to the world.#GoCougs pic.twitter.com/lp7h2Bw1CR

I love this above photograph and accompanying story. It is so beautiful to read of the power of The Holy Ghost moving in the lives of young people. My prayer is for the continued sharing of love throughout the world, especially through the vehicle of sports. Thank you brothers for this message and building on an already inspiring day experiencing a Temple Square Tour by the Sisters. Our Lord truly loves us!

Such a wonderful refreshing story in a time of such division in our country. I too was baptized at 18 50 years ago in Cincinnati Ohio. Please read & call the Missionaries’s. You’ll be forever grateful you did.

Gunner you were touched with a good feeling inside that gave you the desire to find out about our faith. Read the Book of Mormon and talk to the Missionaries and you will learn about The Church of Jesus Christ of Latter Day Saints. I did and I am so grateful I did. I was baptized 46 years ago and I am grateful I made that decision. I now have a family of 14 it’s wonderful. I continue to follow my Savior Jesus Christ. I am not perfect but with the help of Jesus Christ and His Atonement I can be one day. In the name of Jesus Christ. Amen