“We were at my wife’s mother’s grave today in Toquerville, Utah for the four-year anniversary of her death when I saw this elderly man get out of his truck with a chair in hand (he didn’t walk well).

I told my wife that’s how I hope we are (getting old together) and if she goes first I’d be visiting her the same way. I took this picture because we thought it was so touching.

After several minutes I decided to go talk to him. As I approached I could hear him speaking to her and that he missed her. 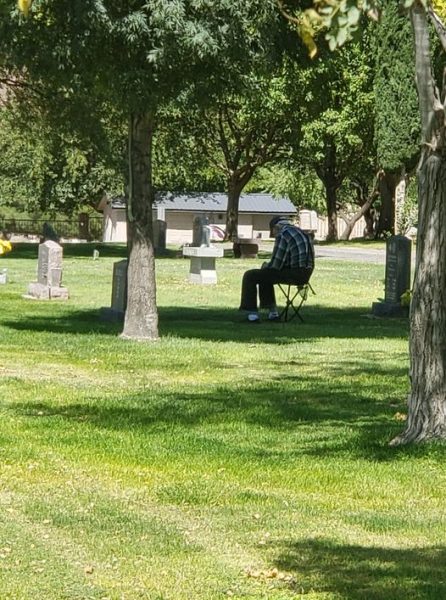 I apologized for interrupting and asked him how he was doing? He told me he’s been better, lost his wife back in February of this year, he’s lonely now, and old (I believe he is 86). He has five kids but none live close to Toquerville (most are in California and his last name is Lee).

He told me about his children. I think one lives in Utah, two or three live in California, I think one daughter is a dentist and one a chiropractor.

He was in the navy during the Korean War, lived for some time in Southern California and at one time worked around the movie industry there. I think he is retired from Northrop Grumman.

He told me the spot he was sitting at was his plot next to his wife and he was waiting to go there.

I thanked him for being a great example and that he inspired me to be a better husband and obviously he had a great marriage and loved his wife.

This man has been on my mind and I would like any of my friends on here to share this that hopefully a relative of his will see it and have loved ones or friends contact him to check on him.”

After reading this article, there were thousands of comments made and we included a few that we felt were good reminders.

Amy Lawrence – Prayers! Sometimes I don’t think children realize when their parents are so sad and lonely because parents won’t say so and always play the “I need to stay strong and not worry the kids” card! I hope his children reach out regularly. Always stay in touch with your family!
Daniel Murphy – God bless him my dad only has a few months to live he buys a single red rose once a week for. Mom she passed away 14 years ago and I sold my business to be here for dad so he wont be alone
Candy Sue Sanders – I hope this is a wake-up call for all kids and grandkids we all grow older and we need our families we still to be loved and take care of us like we did them when they were little it’s sad to say that so many people are like this hoping and praying that someone will contact them. They made time for you why can’t you make time for them
Peggy Crabtree – Erik, I hope your post caught the eye of one of his children. I am going thru same thing, same timing. Don’t think children realize how terribly alone you are and feel. Nice of you to visit with him!