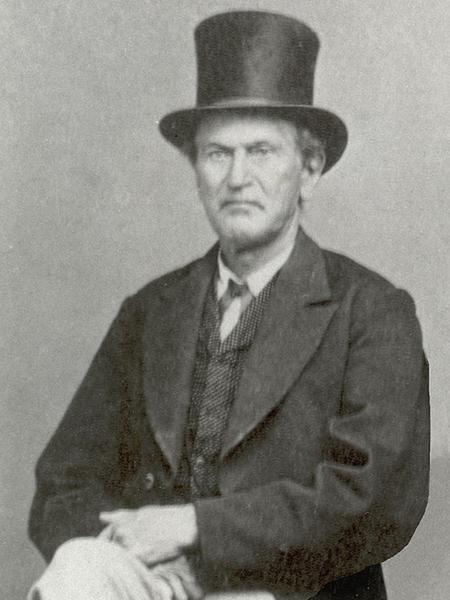 One of the greatest stories shared in Saints Volume 1: The Standard of Truth tells the story of David Whitmer and how he came in contact with Joseph Smith.

David was a friend of Oliver Cowdery and was excited to learn about the work Joseph was doing on the translation of the plates. They would often talk about the gold plates, and Oliver would write to David about the translation process.

An excerpt from Saints shares the following miracle that led to David Whitmer and his family to their vital role in the work of the Lord.

A “letter informed David that it was God’s will for him to bring his team and wagon to Harmony to help Joseph, Emma, and Oliver move to the Whitmer home in Fayette, where they would finish the translation.

People in Harmony had become less welcoming to the Smiths. Some men had even threatened to attack them, and had it not been for the influence of Emma’s family, they might have been seriously hurt.

David shared Oliver’s letters with his parents and siblings, who agreed to welcome Joseph, Emma, and Oliver into their home.”

“David wanted to go to Harmony immediately, but his father reminded him that he had two days of heavy work to do before he could leave. It was planting season, and David needed to plow twenty acres and enrich the soil with plaster of paris to help their wheat grow. His father said he ought to pray first to learn if it was absolutely necessary to leave now.

David took his father’s advice, and as he prayed, he felt the Spirit tell him to finish his work at home before going to Harmony.

The next morning, David walked out to the fields and saw rows of dark furrows in ground that had been unplowed the evening before. Exploring the fields further, he saw that about six acres had been plowed overnight, and the plow was waiting for him in the last furrow, ready for him to finish the job.

David’s father was astonished when he learned what had happened. “There must be an overruling hand in this,” he said, “and I think you had better go down to Pennsylvania as soon as your plaster of paris is sown.”

David worked hard to plow the remaining fields and prepare the soil for a successful planting. When he finished, he hitched his wagon to a strong team of horses and set out for Harmony earlier than expected.”

Another account of this miracle was shared in the words of Lucy Mack Smith:

“The next morning, David took a wooden measure under his arm and went out to sow the plaster, which he had left, two days previous, in heaps near his sister’s house, but, on coming to the place, he discovered that it was gone! He then ran to his sister, and inquired of her if she knew what had become of it. Being surprised she said, “Why do you ask me? Was it not all sown yesterday?”

“Not to my knowledge,” answered David.

“I am astonished at that,” replied his sister, “for the children came to me in the forenoon, and begged of me to go out and see the men sow plaster in the field, saying, that they never saw anybody sow plaster so fast in their lives. I accordingly went, and saw three men at work in the field, as the children said, but, supposing that you had hired some help, on account of your hurry, I went immediately into the house, and gave the subject no further attention.”

David made considerable inquiry in regard to the matter, both among his relatives and neighbors, but was not able to learn who had done it. However, the family were convinced that there was an exertion of supernatural power connected with this strange occurrence.”

This wasn’t the only miracle that the Whitmer family was privy too.

Saints contains another incredible story that details the faithfulness of David’s mother, and how the Lord saw her efforts and blessed her with the things she needed to push forward.

Chapter seven of Saints includes the story of Mary Whitmer who became a witness of gold plates even before her son David did. Since the translation was now taking place at her home, she had a lot on her hands.

“Once Joseph, Emma, and Oliver moved to Fayette, David’s mother had her hands full. Mary Whitmer and her husband, Peter, already had eight children between the ages of fifteen and thirty, and the few who did not still live at home resided nearby.

Tending to their needs filled Mary’s days with work, and the three houseguests added more labor. Mary had faith in Joseph’s calling and did not complain, but she was getting tired.

The heat in Fayette that summer was sweltering. As Mary washed clothes and prepared meals, Joseph dictated the translation in an upstairs room. Oliver usually wrote for him, but occasionally Emma or one of the Whitmers took a turn with the pen.

Sometimes, when Joseph and Oliver tired of the strain of translating, they would walk out to a nearby pond and skip stones across the surface of the water.

Mary had little time to relax herself, and the added work and the strain placed on her were hard to bear.

One day, while she was out by the barn where the cows were milked, she saw a gray-haired man with a knapsack slung across his shoulder. His sudden appearance frightened her, but as he approached, he spoke to her in a kind voice that set her at ease.

“My name is Moroni,” he said. “You have become pretty tired with all the extra work you have to do.” He swung the knapsack off his shoulder, and Mary watched as he started to untie it.

“You have been very faithful and diligent in your labors,” he continued. “It is proper, therefore, that you should receive a witness that your faith may be strengthened.” 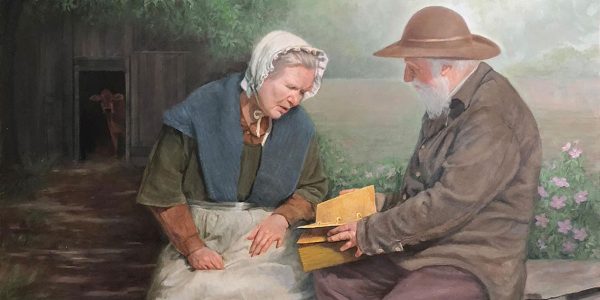 Moroni opened his knapsack and removed the gold plates. He held them in front of her and turned their pages so she could see the writings on them. After he turned the last page, he urged her to be patient and faithful as she carried the extra burden a little longer. He promised she would be blessed for it.

The old man vanished a moment later, leaving Mary alone. She still had work to do, but that no longer troubled her.”

These are just two of the incredible examples of ways in which the Lord put forth his hand to guide His work and provide comfort to the Whitmer family who aided in it.

Later on, David Whitmer was blessed to have an experience of his own that confirmed the truth of the gold plates.

In June of 1829 David Whitmer wrote. “Joseph, Oliver Cowdery and myself were together, and the angel showed them [the plates] to us. … [We were] sitting on a log when we were overshadowed by a light more glorious than that of the sun. In the midst of this light, but a few feet from us, appeared a table upon which were many golden plates, also the sword of Laban and the directors.

I saw them as plain as I see you now, and distinctly heard the voice of the Lord declaring that the records of the plates of the Book of Mormon were translated by the gift and power of God.”

During his mission in the Alaska/Canadian Mission, while working with the Native American people, he spoke with a Native Chief about the Book of Mormon. The Chief told him : We know these stories". We pass them down from generation to generation. We also know these three men. They visit use. They appear at the top of this river, then in a blink of an eye they appear down river on the opposite shore. When my husband asked what there names were, the Chief replied that he was tired and ended their talk.