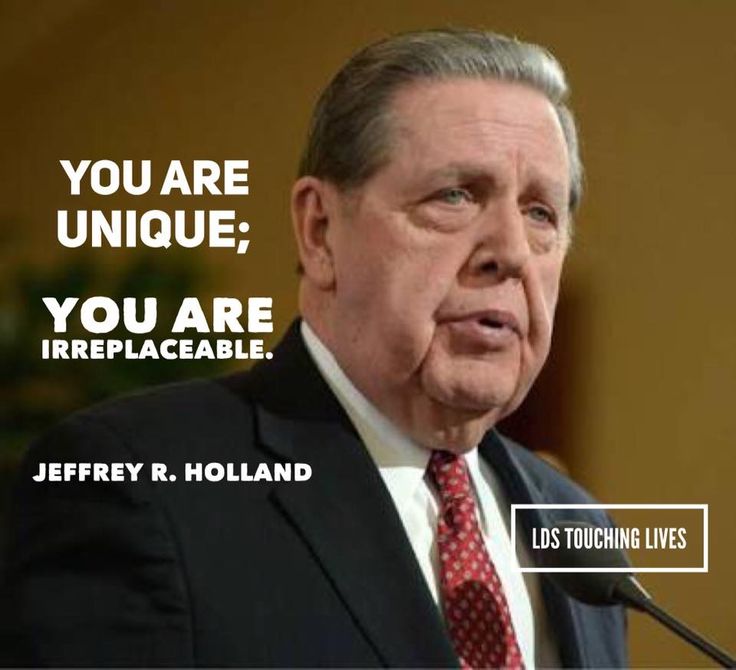 In 2005, Elder Jeffrey R. Holland gave a powerful talk directed to the young women of the church.

Though this talk is now 15 years old, it appears to be even more relevant today – a time when our youth are swarmed with false ideas and surrounded by unattainable standards of beauty on social media.

We’ve included a portion of his talk in text form and the full video of Elder Holland’s talk below.

“I plead with you young women to please be more accepting of yourselves, including your body shape and style, with a little less longing to look like someone else.

We are all different. Some are tall, and some are short. Some are round, and some are thin. And almost everyone at some time or other wants to be something they are not! But as one adviser to teenage girls said: “You can’t live your life worrying that the world is staring at you. When you let people’s opinions make you self-conscious you give away your power. … The key to feeling [confident] is to always listen to your inner self—[the real you.]”8 And in the kingdom of God, the real you is “more precious than rubies.”9

Every young woman is a child of destiny and every adult woman a powerful force for good. I mention adult women because, sisters, you are our greatest examples and resource for these young women. And if you are obsessing over being a size 2, you won’t be very surprised when your daughter or the Mia Maid in your class does the same and makes herself physically ill trying to accomplish it.

We should all be as fit as we can be—that’s good Word of Wisdom doctrine. That means eating right and exercising and helping our bodies function at their optimum strength. We could probably all do better in that regard. But I speak here of optimum health; there is no universal optimum size.

Frankly, the world has been brutal with you in this regard. You are bombarded in movies, television, fashion magazines, and advertisements with the message that looks are everything! The pitch is, “If your looks are good enough, your life will be glamorous and you will be happy and popular.” That kind of pressure is immense in the teenage years, to say nothing of later womanhood. In too many cases too much is being done to the human body to meet just such a fictional (to say nothing of superficial) standard.

As one Hollywood actress is reported to have said recently: “We’ve become obsessed with beauty and the fountain of youth. … I’m really saddened by the way women mutilate [themselves] in search of that. I see women [including young women] … pulling this up and tucking that back. It’s like a slippery slope. [You can’t get off of it.] … It’s really insane … what society is doing to women.”10

In terms of preoccupation with self and a fixation on the physical, this is more than social insanity; it is spiritually destructive, and it accounts for much of the unhappiness women, including young women, face in the modern world. And if adults are preoccupied with appearance—tucking and nipping and implanting and remodeling everything that can be remodeled—those pressures and anxieties will certainly seep through to children.

At some point the problem becomes what the Book of Mormon called “vain imaginations.”11 And in secular society both vanity and imagination run wild. One would truly need a great and spacious makeup kit to compete with beauty as portrayed in media all around us. Yet at the end of the day there would still be those “in the attitude of mocking and pointing their fingers” as Lehi saw,12 because however much one tries in the world of glamour and fashion, it will never be glamorous enough.

A woman not of our faith once wrote something to the effect that in her years of working with beautiful women she had seen several things they all had in common, and not one of them had anything to do with sizes and shapes. She said the loveliest women she had known had a glow of health, a warm personality, a love of learning, stability of character, and integrity.

If we may add the sweet and gentle Spirit of the Lord carried by such a woman, then this describes the loveliness of women in any age or time, every element of which is emphasized in and attainable through the blessings of the gospel of Jesus Christ.”

What We Can Learn From How Fire Ants React When They Are Caught in a Storm
← Previous
Service After the Storm Shines Light on Power of Love to Bridge Chasms
Next →
Comments are closed.
21 shares