A Hurricane Survivor’s Message to “My Mormon Friends” 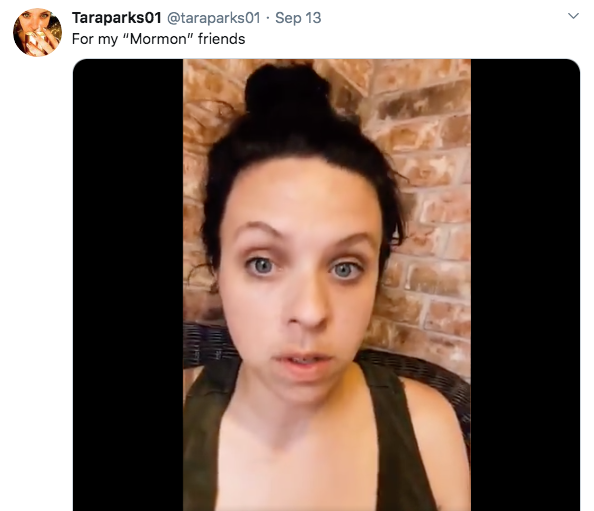 Tara Parks was one of the many impacted by Hurricane Laura, a deadly and damaging Category 4 Atlantic hurricane that tied the 1856 Last Island hurricane as the strongest hurricane on record to make landfall in the U.S. state of Louisiana, as measured by maximum sustained winds. (Wikipedia)

Due to the damaged her property sustained in the storm, Tara reached out to Crisis Cleanup for assistance in helping remove a large tree that had fallen on her house.

What happened next shocked her.

Because of the impact this experience had on her, Tara published a video on TikTok entitled, “For my Mormon friends.”

The video has circulated all over the internet and has thousands of shares on TikTok, Facebook, Twitter, with many thousands of people sharing their comments on the kindness of “Mormons.”

We’ve posted the video below. (Warning: there is one instance of inappropriate language, but due to the nature of the video we felt it important to share this person’s perspective)

We are so grateful to Tara for sharing her experience and expressing gratitude for the help she received in her time of need.

LDS Living shared an article written by Monica Stock, who is the Coordinating Council Communications in Louisiana, and was asked to get in contact with Parks to get to know her better.

An excerpt from that article talks about Parks’ faith background and how this experience has impacted her:

Though Parks, who works as an art teacher, isn’t involved in organized religion, she respects those that are involved in it. She was brought up in a house of faith and has turned to God in difficult times.

“About a year ago, I was really struggling,” Parks described. “I decided to talk to God. It had been a long time. I wondered if He was really there, and I told him that. I also told him it would be a great time to let me see His hand in my life.”

Lately, she has had experiences that have made her take notice that she is not alone.

“When those yellow shirts came marching in to remove the tree from my house, smiling the whole time, I saw His hand again,” Parks said. “I always struggled with watching people who profess with their mouths but do not follow through with their hands and feet. . . I hope my light-hearted posts are not only entertaining but serve to remind people of the good going on around us. I am trying to remember to see the good, and the memory of those people in yellow shirts will make me smile for a very long time.”

My Message to Mormons

Having followed this story for a few weeks I became aware of many of the comments on Tara’s videos and a good number of them were correcting her and telling her that we aren’t called Mormons, but members of The Church of Jesus Christ of Latter-day Saints.

To be honest, that made me sad. This dear woman shared this incredible experience she had with her Mormon friends, and then hundreds of people comment on her video telling her over, and over, and over that she called us by the wrong name.

When I say a good number, I mean enough to make Tara release another video making it apparent that Mormons didn’t want to be called that anymore.

My Latter-day Saint friends, please extend some grace to people who are unaware of recent emphasis that our dear prophet has placed on using the correct name of the church. We don’t need to correct everyone, and everyone doesn’t need to correct.

In a scenario like this, express gratitude to this dear friend of ours for being willing to share her gracious comments about her personal experience.

Having Tara share how members of the church came to her in her time of need is exactly what the gospel of Jesus Christ is all about.