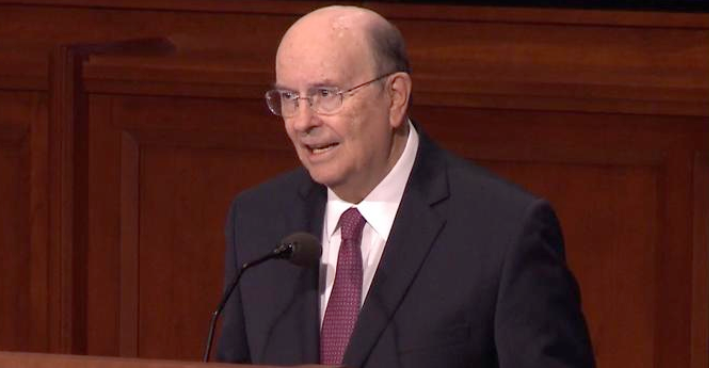 Elder Quentin L. Cook, an Apostle of The Church of Jesus Christ of Latter-day Saints, encouraged faculty and staff at Brigham Young University (BYU) Monday in their ongoing efforts to guide young adults through challenges to faith.

The Apostle asked educators to maintain “a laser-like focus on our responsibility to help build faith in Jesus Christ and in His restored Church.”

He suggested, “One area that can help us to build faith is to be particularly sensitive in creating unity and being grateful for diversity.”

“We each need to be at the forefront of righteously repenting and following the counsel of President Russell M. Nelson, who asked us ‘to build bridges of cooperation rather than walls of segregation,’” Elder Cook said.

“A principal purpose for me today is to encourage you in your efforts to bless and guide the rising generation, to correct falsehood and matters taken out of context in a loving and kind way,” Elder Cook told faculty in a prerecorded message streamed during the first day of BYU’s annual university conference.

Elder Cook, who was a missionary in Great Britain in the 1960s, used the fictional writings of British author Anthony Trollope to illustrate how criticism of faith has a long history that has touched all religions. Trollope’s early writings emphasized the critique of the Anglican Church, including some of its history and financial affairs. Trollope’s fictional Church leaders respond to this criticism in different ways. One vigorously defends the church by hiring a lawyer, who discovers loopholes and avoids engaging the merits of the arguments. Another, the Reverend Septimus Harding, is an “openhanded, just-minded man” who feels “there might be truth in what has been said.” He is described by some as having “persistent bouts of Christianity.”

What we see in Septimus Harding can help us understand why The Church of Jesus Christ of Latter-day Saints responds the way it does to criticism, Elder Cook said. He noted, as a chief example, the faith’s response to the “Book of Mormon” musical.

“We are certainly among the least aggressive in defending ourselves against obviously untrue and/or unfair criticism,” Elder Cook said. “Maybe ‘persistent bouts of Christianity,’ a heartfelt desire to be true Christians, and a determination to turn the other cheek are the only plausible answers” for why we respond in this way.

Knowing how and when to respond to criticism is, in part, the fruit of doing the requisite educational legwork to understand as much context as possible. Elder Cook quoted the managing director of the Church History Department, Matt Grow: “Be careful about sources of information that just seek to tear people down. Look instead for sources of information that are based on the records left by the people themselves and that seek to be fair to them.” Elder Cook referenced the Church’s production of the narrative history “Saints,” the voluminous texts of “The Joseph Smith Papers,” and the Gospel Topics Essays at ChurchofJesusChrist.org to help people piece together the big picture of its past.

Latter-day Saints who understand more of their history, especially of those times when Church members were marginalized or persecuted, will have “courage to stand with the marginalized today,” Elder Cook said. This understanding includes, for example, knowing why the Saints were driven from Missouri. Among other reasons, this happened because of their sympathetic views toward Native Americans and their disapproval of slavery.

Furthermore, Elder Cook said, “recognizing when we have fallen short should create more desire to do our best today.” Thus, a person of strong faith can acknowledge that Brigham Young “said things about race that fall short of our standards today,” yet also recognize that Brigham taught that “Of one blood has God made all flesh. We don’t care about the color.” Also of note is that the Church’s second president and prophet was, for a man of his generation, unusually kind toward Native Americans.

Elder Cook shared his personal experience with race issues from his nearly eight decades of life. That experience includes learning more about 2 Nephi 5:21 with his mission president, Marion D. Hanks. This Book of Mormon verse describes a skin of blackness that was associated with being cut off from the presence of God for a people who lived some 600 years before the birth of Christ.

“President Hanks was adamant that this phrase related solely to that people during that period of time,” Elder Cook said. “He had us immediately turn to Second Nephi 26:33 which reads in part, ‘and he denieth none that come unto him, black and white, bond and free, male and female; and he remembereth the heathen; and all are alike unto God, both Jew and Gentile.’ That was our doctrine then, and that is our doctrine now. President Hanks made it clear that if anyone had feelings of racial superiority, they needed to repent.”

Touching on some of today’s public movements, Elder Cook voiced concern at those who attack faith and reframe and distort history.

“Some, intentionally or not, are trying to undermine our country’s founding history and the United States Constitution,” Elder Cook said. “Whether by intention or by myopia, both effects are regrettable. … We all support peaceful efforts to overcome racial and social injustice. This needs to be accomplished. My concern is that some are also trying to undermine the U.S. Constitution and Bill of Rights that has blessed this country and protected people of all faiths. We need to protect religious freedom. Far too many have turned from the worship of and accountability to God.”

He challenged BYU faculty to lift and bless their students, to light fires in their souls and to “sound doctrinal trumpet calls that will echo in their hearts and minds throughout their lives.” If they do this, “there will be a strong foundation of faith and service and righteousness that will bless the Church and bless the world.”

I for one would like to do a more deeper dive into the Church as it relates to race. I am 61 years old, and honestly feel like I was taught things that created false beliefs in me that were common enough to be prevalent in my youth. I have come to believe that we can all say we were taught false principles, but thankfully, it is through the Book of Mormon that it's doctrine have always been sound, if not interpreted improperly by some. I think we need to embrace the past, to put some of these false beliefs on trial, so we can all confess the truth and be led by the Holy Ghost to align with our present circumstances in a way that can heal the effected, and make us all more Christlike in the future