This article original appeared on Book of Mormon Central, and is posted here with permission.

Alma 11 contains an intriguing story of a lawyer named Zeezrom and his contention with Amulek and Alma. However, this chapter starts off with a seemingly confusing and misplaced list of the Nephite monetary system. With names like antion, senine, ezrom, onti, readers may wonder why this list exists at all.

Mormon’s explanation of the Nephite monetary system might illuminate several points of interest for readers. First of all, knowing the value of Nephite money helps the reader appreciate enormity of Zeezrom’s bribe to Amulek. When you realize that a judge’s daily wage was one senine of gold, you can calculate that six onties of silver would have been equivalent to 42 days of wages.

We do not know how much money a Nephite judge would have made compared to today’s standards, since modern currency systems, modern standard of living, and modern economic practices are vastly different from the ancient world. However, by taking the average daily wage of a U.S. citizen in 2019 ($205.76, according to the U.S. Bureau of Labor Statistics), you can estimate that 6 onties of that value would produce a total bribe of over $8,000.

Secondly, knowing the Nephite monetary system helps you discover a wordplay on the name “Zeezrom” and the monetary unit “Ezrom.” In Hebrew, the “Ze-“ prefix means “that of” or “he of.” So the name Ze-ezrom, means “He of the ezrom.” Zeezrom would be a ironically appropriate name for a character that tried to bribe a messenger of the Lord.

Thirdly, the sophistication of the Nephite system of currency is a striking evidence for the Book of Mormon. This system has remarkable similarities to ancient monetary systems we find in ancient Mesopotamia. In addition, Kirk Magleby has identified various ways that the Book of Mormon monetary system fits comfortably in an ancient American setting, based on recent archaeology.

The following post by Kirk Magleby is cross-posted from Book of Mormon Resources.

The Book of Mormon describes an advanced market economy with:

We now know that the ancient Maya had an advanced market economy with many of these same characteristics. An important article entitled “Imagining a Complex Maya Political Economy: Counting Tokens and Currencies in Image, Text and the Archaeological Record” by David A. Freidel, Marilyn A. Masson, & Michelle Rich was published in Cambridge Archaeological Journal, Volume 27, Issue 1 (February, 2017) pp. 29-54. The article discusses a number of points interesting to serious students of the Nephite text. The number in aqua at the end of each point indicates which Book of Mormon characteristic from the list above it resembles or corroborates.

Anthropologists have discovered analogues in the ancient Maya world for ten of the twelve market characteristics described in the Nephite text. 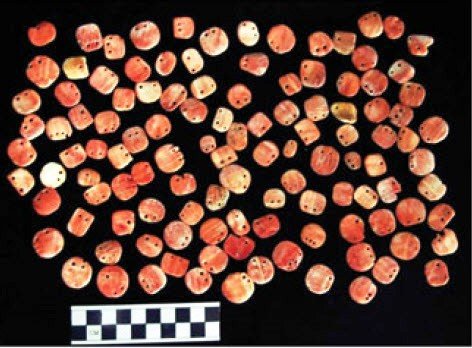 Objects known to have been used as stores of value and currencies for exchange among the ancient Maya: 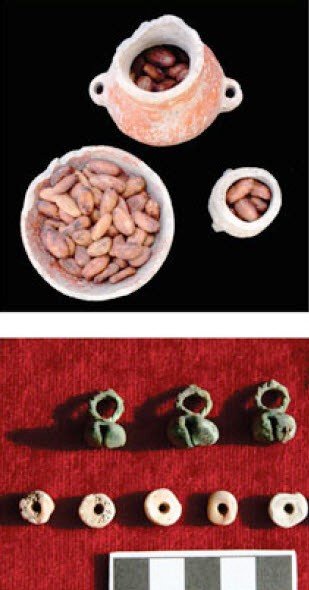 A scene depicting commerce or tribute and bookkeeping: 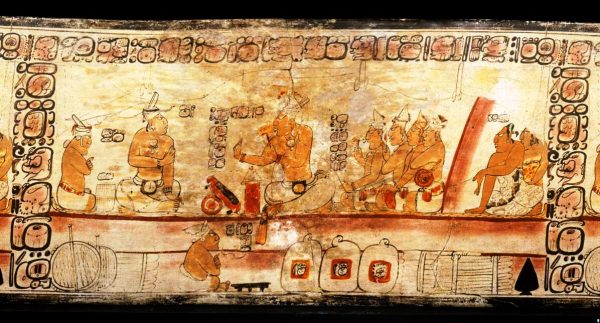 Another scene depicting commerce or tribute and bookkeeping:

This is the famous depiction of God L, patron deity of merchants, at Cacaxtla. 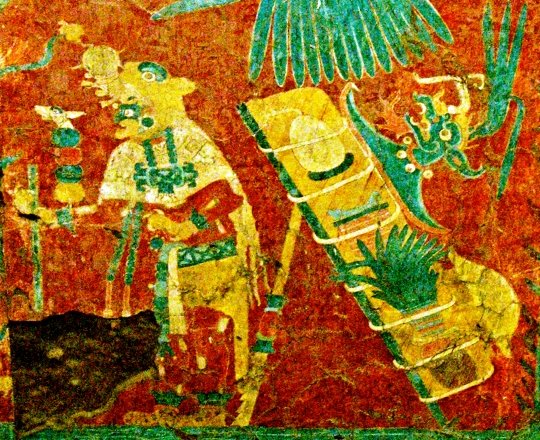 The Figure’s Backrack, Held up by a Pole, is Full of Trade Goods. Photo by Kirk Magleby, January 29, 2020

This from the Tarlton Law Library, UT Austin, Article entitled “Maya Property and Commercial Law:” The Maya did have a currency system, and used cacao beans, gold, copper bells, jade, and oyster shell beads as forms of money.

The use of marine shells as currency has considerable time depth in Mesoamerica. Richard Hansen in October, 2015 said sea shells were being used as money as early as 1,000 – 800 BC in the Mirador Basin. He further said sea shells as a form of currency show up in Cahal Pech, Belize during this same time period. See the blog article “Hansen and Coe.”

Some have suggested that the Ilmenite iron ore beads depicted in the blog article “Olmec Iron” may have been used as currency.