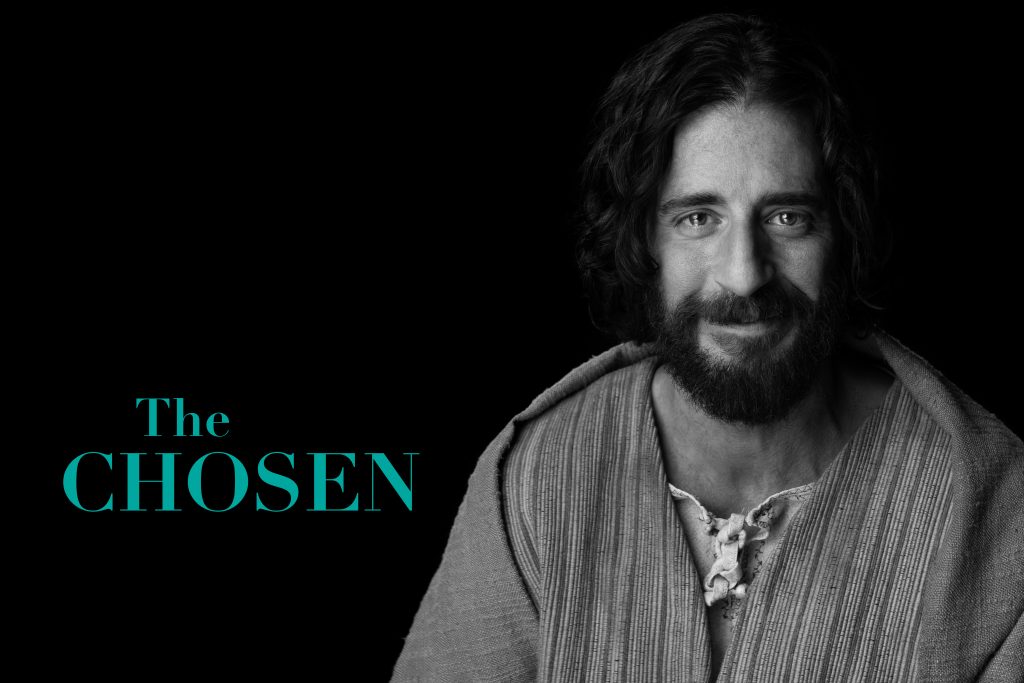 The Chosen is the first-ever-multi-season TV show about the life of Jesus. Created outside of the Hollywood system, The Chosen allows us to see Him through the eyes of those who knew him. No matter where you are in your journey with Jesus Christ, this TV show is for you.

Check out the following reviews from viewers and see if it doesn’t get you excited to give The Chosen a chance!

Jesus In A Way You’ve Never Seen Him

For a story that I’ve read and heard many times, I’ve never felt more connected to Jesus and his disciples than I did while watching The Chosen. The authenticity and relate-ability in the stories surrounding the characters add so much depth.

Sensible humor throughout this series only adds to viewers’ enjoyment. A must watch for anyone who enjoys well written, authentic, thought-provoking stories. It will leave you thirsty and wanting more.

Fantastic on So Many Levels!

At the end of the first episode, I was a pile of tears and four days later, I had watched all available episodes twice. It captures the depth and richness of Ancient Sacred Scripture.

As Saint Augustine said, “the New Testament is hidden in the Old and the Old Testament is unveiled in the New.” This series gets that 100%!

We are seeing these stories from the perspective of the future apostles and disciples. The series takes what we know from the Gospels and dives deep into their lives.

We can relate to their flaws and find hope and joy along with them when they encounter Jesus. As with those who heard Peter in his first Sermon, I was “cut to the heart” (Acts 2:37).

With all of that being said, if you do not know Scripture, the depth and quality of the stories and characters are such that you will love it.

All of the names could be changed and this would easily be the next big Netflix binge or Game of Thrones obsession. This doesn’t even need to be put in some separate Christian category. It is on par with the greatest series I have seen.

It depicts real people and real history with incredible actors, music, direction, and obviously story….because it is the greatest story ever told that shaped everything good in our world through the true love our lives, Jesus Christ. 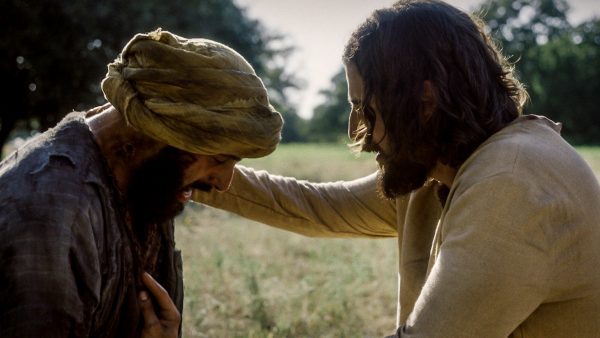 Easily One of the Best Shows of all Time!

My husband and I binged Jesus in just a few days and this show is absolutely amazing. It’s by far the best portrayal of Jesus I’ve ever seen!

The Best On-Screen Depiction of the Life Christ

Christian movies and shows aren’t typically known for quality, good character development, or well-written, compelling stories. There are certainly some exceptions (e.g., The Passion of the Christ, I Can Only Imagine, Ben-Hur, I’m Not Ashamed, Faith Like Potatoes, The Case for Christ, and Narnia).

To cut straight to the point: The Chosen is far and away the best on-screen depiction of the life of Christ-either mini-series or movie. The writing and character development are exceptional. It’s as captivating as The Passion, yet in so many ways more human and relatable. My family and I keep re-watching them just to get one more glimpse of the Son of Man. The miracles are deeply moving and will bring you to tears.

And now… the biggest problem is we’ll have to wait for Season 2.

Best Depiction of Jesus EVER!

This is so mesmerizing to me to watch (over & over). I have had the amazing opportunity to watch the first 4 episodes and I cannot stop watching.

This series gives the exact perspective needed to see Jesus’s workings as he touches individuals’ lives along with seeing those people BEFORE he enters their lives. It is so much more relatable.

I feel like I am FINALLY seeing Jesus beyond the bible, in a wholesome and well-rounded depiction that reaches to my soul. God bless this series and everyone this show touches.

I’ve been genuinely blown away by this – I’ve watched a fair few adaptations of the life of Jesus before and this is just such a great one! I LOVE the thought and care and research that’s obviously gone into making the series.

The character development and acting are top quality – characters who I’ve read about since childhood have come to life like never before. The creators of the show have invented some of the details of characters’ backstories before they come across Jesus, but everything they’ve invented feels respectfully plausible – it might not have happened, but it feels like it could have.

It’s so compulsively watchable – I’m literally worried about spoilers even though I know what happens in the Bible – I still want to know exactly how the stories play out, and how the characters interact. Highly recommended, whether you’re a Christian or not – come and get a closer look at Jesus!

I Have Gotten Closer to God

This series has helped me get closer to God. I have been a believer all my life but when I watched this series I was able to have a closer relationship with God. This series is very relatable and we can see how the director wanted to show the story of Jesus in a different way that many can relate to. I would recommend and highly encourage anyone and everyone to watch this series, it is life-changing.

This feels so real! I’m so very grateful!!!

I’m so grateful for this show! My heart is cracking open, I’ve only viewed only 6 episodes and it has moved me as a believer. To see our Christ in this human way is so relatable I want more.

I have no one yet to talk to about this show amongst others I know or acquaintances as of yet. I just talk to God.

I am moved to tears of gratitude all the actors have done such an awesome job making this series seem so real to me compared to all the past portrayals. I love Jesus so much more I understand the Bible, God’s word and can put the whole truth into my heart like never before I’m feeling like I’m awakening from a deep freeze. So thank you to everyone who has a part in making this.

I’m so excited to see more and more! I pray this series becomes bigger and bigger and blows up the whole world to wake up and follow our Lord Jesus! Amen 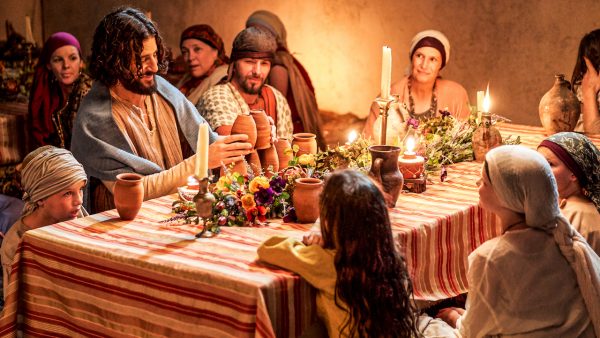 Jesus during the wedding at Cana

For the First Time, I Feel Like Jesus Wants to Be Around Me

I have watched the first season and am floored by the interconnected writing. Each scene builds on each other and links visuals, behaviors, and culture together.

The pace is perfect and each episode feels like several strands of sting all interconnecting and then tied together in the last scene.

I agree with many other reviewers that this is the most compassionate portrayal of Jesus I have ever seen. He has a scene of humor, he is afraid, he bleeds, and most important of all the actor portrays him as a person who cannot be hurt by others because he is more concerned about their well being.

In short, he portrays what love looks like in action because love thinks more of others than it does itself. I cannot recommend this highly enough because for the first time I feel like Jesus wants to be around me.

This series has shown Jesus in a new light. Like never before, you see His relatable, kind, funny, compassionate, and always loving personality on display! I have felt intimately closer in my relationship with Jesus after watching season 1!

I tell everyone I know about the best TV series that I have ever binged! I pray that everyone who does watch it would be radically touched by the loving presence of the Living God and His Amazing son Jesus! I can’t wait for season 2, so I’m happy to donate to help make it happen!

I cannot recommend this highly enough because for the first time I feel like Jesus wants to be around me.

Such a great show that does a great job of trying to bring authenticity to the story of Jesus. I was already a Jesus fan and when I watch this it made me fall even more in love with Christ. Great at depicting the love Jesus had, and the human nature of the disciples. Would recommend to everyone I know even if they are not a believer. Btw I’m about to watch it again and buy the 1st season.

A Beautiful Display of the Truly Human Biblical Figures!

This show is a masterpiece of storytelling that beautifully highlights the humanity of the biblical stories.

The two greatest strengths of the series are the exquisite weaving between the old testament and gospel events, and the interactions between each of the gospel figures.

The show fantastically highlights the humanity of every figure. This allows one to really empathize with them and see themselves in their shoes.

This is a must-watch, whether you are a devout Christian or just curious! God is really working through the creator Dallas Jenkins. God bless him.

The fact that the show was able to be independently crowdfunded is a testament to God’s tangible work today.

The casting decisions were near perfect, and you can tell. Just Peter himself reveals how much care went into them.

This show will change your life. God bless.

I LOVED IT! Finally a series without sex, guns, and violence. I love all the episodes and can’t wait to watch more. I’m rewatching all of them plus all the bonus features. It’s a bit filmed in the dark at first but gets better. I dare you not to cry or be touched by watching this series. It’s filmed with excellent actors (and production crew) who care about their artwork. Much research went into the script. Love history? Start here.

You only need a smartphone to watch this – and you can cast it directly to your TV.

To learn more about The Chosen, you can visit their website here.