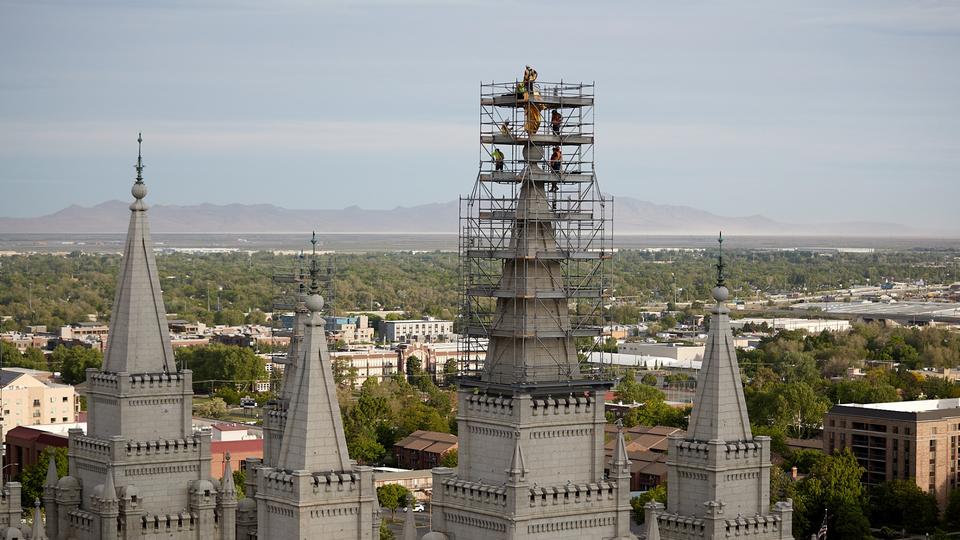 Daniel Woodruff, spokesperson for The Church of Jesus Christ of Latter-day Saints, released the following statement to the media:

Crews on Temple Square are working to remove the angel Moroni statue and capstone which stand atop the Salt Lake Temple. This has long been planned as part of the temple renovation, but the timeline to do so was accelerated following the earthquake in March.

The statue and capstone will be preserved and refurbished before being reinstalled at a later date. Work also continues to remove stones from the upper spires of the temple for preservation during the project. Those stones will be reinstalled in the future.

The renovation of the temple will involve replacing the historic building’s aging mechanical, electrical, and plumbing systems, as well as a significant seismic upgrade to help the building withstand a large-magnitude earthquake.

“This upgrade will include a base isolation system, which is one of the most effective means of protecting a structure against earthquake forces,” said Brent Roberts, managing director of the Church’s Special Projects Department. “This unique system will preserve the historic footing of the temple. Once complete, it will help protect people, the historic building, and the beautiful interior finishes in the event of an earthquake.”

This morning, the angel Moroni statue & circular capstone beneath its feet were removed from the temple’s central east spire for preservation & refurbishing. This will prepare both items for a later reinstallation. @Ch_JesusChrist pic.twitter.com/t5VlTiaKwX

The installation of the base isolation system will require deep excavations around the historic footings and foundation of the temple and will also require the strengthening of the stone spires and walls.