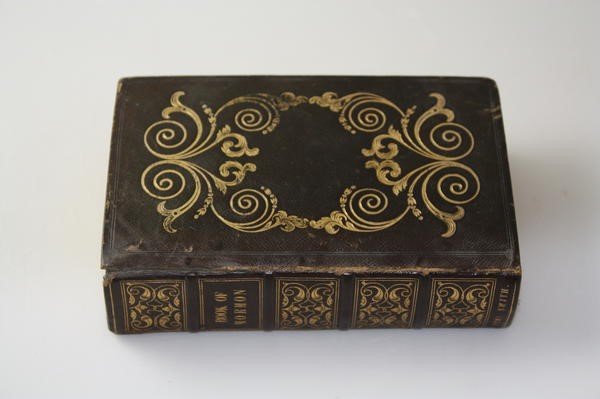 This article was originally published in the Church News.

Lynn and Tanya Bascom, residents of Bountiful, Utah, and members of the Bountiful 3rd Ward were on vacation this past June in Boston, Massachusetts, area where they discovered Emma Smith’s personal copy of the Book of Mormon.

Lynn and Tanya Bascom, a Latter-day Saint couple from Bountiful, Utah, touring some of the nation’s historical sites in the Boston, Massachusetts, area. At the home of John Quincy Adams, they found an 1841 copy of the Book of Mormon that originally belonged to someone very special in Church history — Emma Smith, wife of the Prophet Joseph Smith.

“It’s thrilling that there is a copy of the Book of Mormon out there with such a wonderful background.” —Lynn Bascom

“We went back East for a wedding in Nantucket,” said Lynn Bascom. “My wife was born in Cape Cod, and we love to visit the New England area.” While they were there, Brother and Sister Bascom decided to visit some historical sites associated with the family of John Adams in Quincy, Massachusetts.

The final stop on the Adams historical sites tour is the Old House at Peacefield, the home of John Quincy Adams. 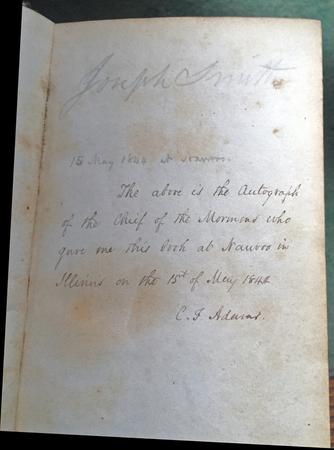 “In his will, John Quincy Adams requested that his library of books be preserved in a fireproof structure,” said Brother Bascom. “The library is actually a quaint little cottage that is a separate stone building [housing] more than 14,000 volumes. They put in skylights so you can see the vast array of books there.”

The National Park Service oversees the tour of the Adams’ historic homes and a park ranger led the tour that the Bascoms attended. “The guide doing the tour asked us where we were from, and we told him we were from Utah,” said Tanya Bascom.

“He asked us if we would be interested in seeing a copy of the early edition of the Book of Mormon and directed us to a table in the library that contained several books. About six feet away from us was an 1841 copy of the Book of Mormon given to Charles Francis Adams by the Prophet Joseph Smith.” (Charles Francis was the son of John Quincy Adams)

“My wife asked if we could touch the Book of Mormon but we were told ‘no,’” said Brother Bascom. “There was also no photography allowed in the home. It was nice the guide threw it out there that the book existed. There was a large table of books that were out for display, and we could see it just a few feet away. We had taken this tour before and never noticed the Book of Mormon.”

The story might have ended there without the help of Utah historian Ron Fox, a member of the Salt Lake 14th Ward. The Bascoms shared their experience with him when they returned home from their vacation and then he went to work trying to find out more. Working with the National Park Service, he obtained photos of the Book of Mormon. The results were astonishing.

The photos showed the spine of the book, indicating that it had been Emma Smith’s personal copy.

It can be seen along the bottom of the book’s spine that this copy belonged to Emma Smith. Photo courtesy Adams National Historical Park.

“A few of the copies of the 1841 Book of Mormon, the first to be published in England, were engraved with the names of early Church leaders,” said Brother Fox. “Joseph, Emma and Hyrum all had their own copies, as well as the members of the Quorum of the Twelve and their wives. No one knew where Emma’s copy was until now. Now I wonder where Joseph Smith’s copy is. Somebody might have an 1841 copy of the Book of Mormon with the name Joseph Smith engraved on it and not realize it was his personal copy.”

The photos also revealed that Joseph Smith had personally signed the book and Adams had documented the receipt on the same page underneath Joseph Smith’s name.  Adams wrote in the Book of Mormon he received, “The above is the autograph of the chief of the Mormons who gave me this book at Nauvoo on the 15th of May 1844.” It was signed C. F. Adams.

“Joseph Smith did not sign more than a handful of copies of the Book of Mormon,” said Brother Fox. “This signature and the fact that it was Emma’s copy means the book would be worth a great deal if it were on the public market, probably in excess of a million dollars or more.”

To learn more and see who said of Joseph Smith that “none had so won human hearts and shaped human lives as this Joseph,” visit The Church News for the full article.

You can also see Tim Ballard’s experience visiting the library and the research he did to discover how the Book of Mormon made it to the Adams’ family library.

Finding Peace in Christ as a Single Parent
← Previous
Real Human Trafficking Story: Emotional Reunion of Mother And Daughter Together After 25 Years
Next →
Comments are closed.
9 shares