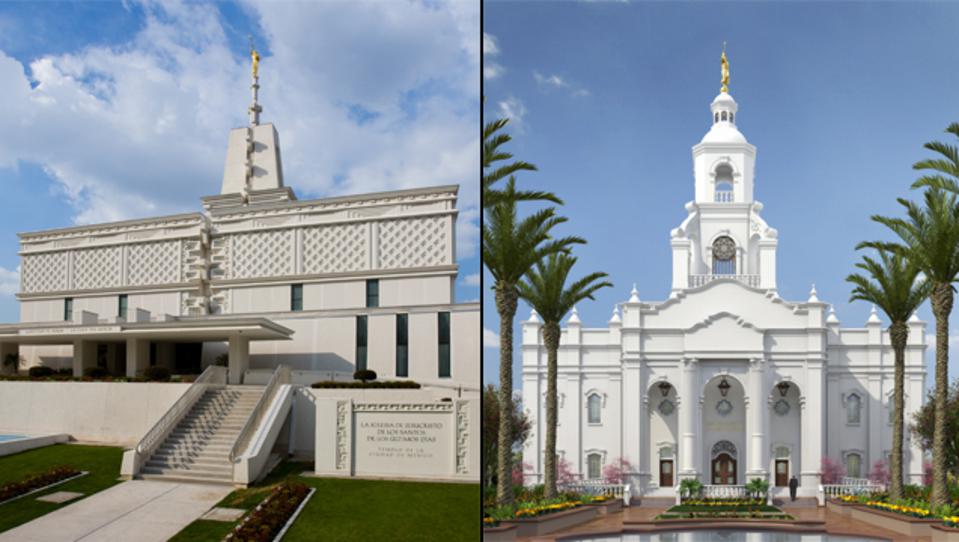 Read more below about each location.

Florida is home to more than 150,000 Latter-day Saints and approximately 275 congregations. The state’s first official Church congregation was created in Jefferson County in 1897. By the early 1900’s there were more than 1,200 Church members in Florida. The Tallahassee Florida Temple will be the state’s third temple. The other two temples include the Orlando Florida Temple and the Fort Lauderdale Florida Temple.

Lubumbashi, Democratic Republic of the Congo

There is presently one temple in Pennsylvania, the Philadelphia Pennsylvania Temple. It was dedicated on September 18, 2016 by President Henry B. Eyring. Pennsylvania is home to more than 100,000 Latter-day Saints with more than 50 congregations. The Church has a rich heritage in Pennsylvania. Two years prior to the organization of the Church in 1830 in New York, Church president Joseph Smith moved to Harmony, Pennsylvania where he translated most of the Book of Mormon.

There are more than 175,000 Latter-day Saints in nearly 650 congregations in Nigeria. The Benin City temple is the third temple to be announced in Nigeria. The Aba Nigeria Temple was dedicated in 2005 and the Lagos temple was announced in a previous conference. The first Nigerians were officially baptized in 1978. Church membership rapidly increased thereafter.

The Dubai temple will be the first to be built by the Church in the Middle East. It will serve thousands of Latter-day Saints living in two stakes in the Gulf States and a number of member districts in the Middle East, northern Africa, eastern Europe, and western Asia. The first self-standing Church meetinghouse in the Middle East was dedicated by Elder Jeffrey R. Holland in the emirate of Abu Dhabi in 2013. The new temple will be built in District 2020, the future legacy site of Expo 2020 Dubai, after that worldwide event concludes.

The Dubai temple will be the first to be built by the Church in the Middle East. It will serve thousands of Latter-day Saints living in two stakes in the Gulf States and a number of member districts in the Middle East, northern Africa, eastern Europe, and western Asia.

The United Arab Emirates has been an example of tolerance and religious inclusion since the country was founded in 1971. The first self-standing Church meetinghouse in the Middle East was dedicated by Elder Jeffrey R. Holland in the emirate of Abu Dhabi in 2013.

The new temple will be built in District 2020, the future legacy site of Expo 2020 Dubai, after that worldwide event concludes. The site will include both a meetinghouse and a temple. The meetinghouse is where Church members living in Dubai will meet for weekly worship services.

In making the announcement of a temple in Shanghai, China, President Nelson gave the following remarks. “Context for the plan for Shanghai is very important. For more than two decades, temple worthy members in the People’s Republic of China have attended the Hong Kong China Temple. But in July 2019, that temple was closed for long-planned and much-needed renovation. In Shanghai, a modest multipurpose meeting place will provide a way for Chinese members to continue to participate in ordinances of the temple—in the People’s Republic of China—for them and their ancestors,” he said.

President Nelson continued, “In every country, this Church teaches its members to honor, obey and sustain the law. We teach the importance of the family, of being good parents, and exemplary citizens. Because we respect the laws and regulations of the People’s Republic of China, the Church does not send proselyting missionaries there; nor will we do so now.”

He concluded, “Expatriate and Chinese congregations will continue to meet separately. The Church’s legal status there remains unchanged. In an initial phase of facility use, entry will be by appointment only. The Shanghai Temple will not be a temple for tourists from other countries.”

Information about The Church of Jesus Christ of Latter-day Saints in the People’s Republic of China in English, Simplified Chinese characters, and Traditional Chinese characters can be found at china.churchofjesuschrist.org.

A Bicentennial Proclamation to the World

During the Sunday morning session of the 190th Annual General Conference of The Church of Jesus Christ of Latter-day Saints, President Russell M. Nelson presented a proclamation in honor of the 200th anniversary of Joseph Smith’s First Vision.

The proclamation invites people everywhere to know for themselves that God speaks and that this Restoration of truth is occurring to help them prepare for the Second Coming of Jesus Christ.

President Nelson introduced and delivered the proclamation (authored by the First Presidency and Quorum of the Twelve Apostles) in a previously recorded video from the Sacred Grove in Palmyra, New York. That grove was the site of Joseph Smith’s vision of God the Father and Jesus Christ.

Instead of erecting a physical monument in honor of that special time in Church history (as has been done previously), President Nelson said the First Presidency and Quorum of the Twelve Apostles felt inspired to create a “monument of words—words of solemn and sacred proclamation—written not to be carved in ‘tables of stone,’ but in words that could be etched in the ‘fleshy tables’ of all human hearts’ (2 Corinthians 3:3).”

After the reading of the proclamation, President Nelson led the worldwide congregation in the Hosanna Shout. This shout has biblical roots and goes back to the early days of the Church. It is a way for Latter-day Saints to give honor and praise to God the Father and His Son Jesus Christ. This is an especially notable act to occur as the Church celebrates the bicentennial of Joseph Smith’s First Vision of Deity.

Prophet Introduces a New Proclamation to the World: “The Restoration of the Fulness of the Gospel of Jesus Christ” #GeneralConference

The 1980 proclamation most closely resembles the one President Nelson introduced Sunday. During the April 1980 general conference, the Church celebrated 150 years since its organization by issuing a proclamation from a reconstructed log home on the site of the Peter and Mary Whitmer farm in Fayette, New York. It was in the Whitmers’ original home that Joseph Smith translated some pages of the Book of Mormon in 1829 and formally organized the Church in 1830.

Here is the text of the full proclamation read by President Nelson #generalconference pic.twitter.com/MRkvE8Pu9n

To see a PDF version of the announcement, click here.

This announcement and Hosanna shout, combined with President Nelson’s unveiling of the new Church symbol, have made for a very memorable April 2020 General Conference. Speaking of the new symbol, President Nelson said it is a continuation of the effort he felt inspired to initiate in August 2018 to focus on the Church’s divinely revealed name. Since that time, he said, the Church’s leaders, departments, related entities, main website, members and many others now use the correct name of the Church.

“We have gone to these extraordinary efforts because when we remove the Lord’s name from the name of His Church, we inadvertently remove Him as the central focus of our worship and our lives,” said President Nelson, who has given strong emphasis to the correct name of the Church in his ministry since at least 1990. “When we take the Savior’s name upon us at baptism, we commit to witness, by our words, thoughts, and actions, that Jesus is the Christ.”

This new emblem emphasizes the name of Jesus Christ and His central role in all the Church does. The name of the Church is contained within a rectangular shape that represents a cornerstone. This idea has biblical roots. The Apostle Paul, employing a construction metaphor in a letter to the first century Saints in Ephesus, wrote that the Church is built upon the foundation of apostles and prophets—Jesus Christ Himself being the chief cornerstone. The center of the symbol is a representation of Thorvaldsen’s marble statue, the Christus. Jesus stands under an arch as a reminder of His emergence from the tomb three days after His death.

“[The symbol] portrays the resurrected, living Lord reaching out to embrace all who will come unto Him,” President Nelson said. “This symbol should feel familiar to many, as we have long identified the restored gospel with the living, resurrected Christ.”

This new symbol will be used on Church materials as directed by the First Presidency and Quorum of the Twelve Apostles. Detailed usage guidelines are being developed, including possible uses of the new symbol around the world.

“The symbol will now be used as a visual identifier for official literature, news, and events of the Church,” the prophet continued. “It will remind all that this is the Savior’s Church and that all we do, as members of His Church, centers on Jesus Christ and His gospel.”

Which temple are you most excited about?