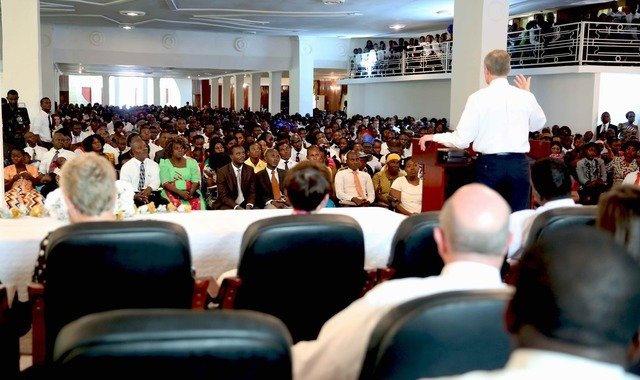 Economic conditions in Liberia have continued to deteriorate, leading to increased difficulties in obtaining basic supplies and conducting missionary work. For this reason, The Church of Jesus Christ of Latter-day Saints has decided to temporarily transfer the remaining 99 missionaries out of that country.

We continue to pray for all people in Liberia at this difficult time, and we look forward to missionaries returning when the situation improves.

The Church had previously released an update on February 2 regarding a reduction of the missionary force in Liberia.

Daniel Woodruff, a spokesman for The Church of Jesus Christ of Latter-day Saints, released the following statement today to media:

The remaining 99 missionaries in the Liberia Monrovia Mission have adequate supplies. The Church will continue to closely monitor the situation and make adjustments as needed. We pray for the people in Liberia as they navigate the economic situation in their country.

Liberia is home to some 13,200 Latter-day Saints, spread throughout 48 congregations. The Church’s missionaries have been in the country since 1987.

We continue to pray for all people in Liberia at this difficult time, and we look forward to missionaries returning when the situation improves.

History of the Church in Liberia

Members and nonmembers who were interested in Church teachings met in homes during 1985-1986. Missionary work was opened in 1987 and the first convert was baptized in August. A few days later 47 people were baptized in a lagoon. The New Kru Town and Congo Town branches (small congregations) were organized that day.

The Liberia Monrovia Mission was created March 1, 1988, when missionary couples were working with some 133 members in Congo Town and New Kru Town. By 1990 several newly converted young men served full-time missions, but all missionaries from Liberia were transferred to Freetown, Sierra Leone because of the civil war that started in December 1989. The mission was closed in April 1991.

During that time, about 400 members remained, 400 fled to neighboring countries and another 400 were unaccounted for. When the war began to abate, some of the members returned. While conditions remained unsettled, no missionaries were assigned to Liberia.

Members started regrouping in 1991, however, and by the spring of 1993, seven of the eight branches had been reorganized. With a renewal of hostilities in 1992, Liberian members experienced additional hardships and suffering.

In April 1996, war again broke out, resulting in considerable destruction in the capital city of Monrovia and other parts of the country. Many members again fled the nation. Peace has gradually been restored since that time.