The second volume of Saints: The Story of the Church of Jesus Christ in the Latter Days is now available for purchase from the Church’s online store and at retail outlets. The digital version is also available for free in the Church History section of the Gospel Library app.

Readers will find themselves moved by the volume’s countless stories of sacrifice. Elder Quentin L. Cook of the Quorum of the Twelve Apostles, who chairs the Church History Department, said he had such an experience while reading volume 2 during a long flight.

“I was in tears four different times reading a hundred pages,” he said. “I don’t [usually] read and get in tears, but I was in tears because I just feel so deeply about our faith and our Church history. And what the members . . . [and] leaders of the Church have done is just incredible.”

Volume 1, which has sold half a million print copies and has more than 1 million digital views since its release in 2018, tells the story of the Restoration of the gospel of Jesus Christ, beginning in 1815 with Joseph Smith’s childhood. It concludes with the Saints worshipping in the Nauvoo Temple in 1846.

Volume 2, No Unhallowed Hand, 1846–1893, picks up where volume 1 left off. The second volume begins with thousands of Latter-day Saints fleeing mobs in Nauvoo, their gathering place for the previous seven years. Readers follow Brigham Young and the Quorum of the Twelve Apostles west across prairie and plain, witnessing their trust that God has prepared a home for them beyond the towering peaks of the Rocky Mountains.

Their quest for a new home is only the beginning of the story. As they serve God and build a new gathering place in the intermountain West, the exiled Saints encounter new obstacles. Stalwart women and men work together to create communities where the faithful can gather near and worship in temples built to glorify God and redeem the living and the dead. At the same time, hundreds of missionaries journey to faraway lands—England and Denmark, South Africa and the Pacific Islands—to invite others to follow Jesus Christ and help establish Zion.

Saints, which will eventually feature four volumes, is the third multivolume official history produced by the Church. Joseph Smith commissioned and oversaw the writing of the first Church history in the 1830s, and it was published beginning in 1842. The second history was published in 1930 by Assistant Church Historian B. H. Roberts, before Church membership had reached 1 million.

Church Historian and Recorder Elder LeGrand R. Curtis Jr. of the Seventy said volume 2 is important because it helps Church members see the faith’s pioneer beginnings from angles that might be new to the everyday Saint.

“I think I know our history pretty well, but I keep finding things as I read [Saints] that added an additional element or an additional perspective,” said Elder Curtis. “I think the readers will find the same thing. You get to read about incidents that are well documented, that will show the courage and the strength of these women and of these men. I don’t want to spoil the ending for anybody, but after some real difficult times here in Utah, this volume ends triumphantly with the dedication of the Salt Lake Temple. For members of the Church all over the world, this is a great symbol of their membership in the Church — that magnificent building that took decades to build.”

Volume 2 explores other important facts and events from this time period, including trials and miracles along the pioneer trail, the settling of Salt Lake City and the surrounding communities, the first Latter-day Saints in the Pacific, complicated relationships with Native American tribes and the U.S. government, the practice of plural marriage, the Mountain Meadows Massacre, the founding of the Young Women and Primary organizations, women in Utah Territory winning the right to vote, the completion of the St. George Utah Temple, Church President Wilford Woodruff’s revelation in 1890 to initiate the end of plural marriage and much more. 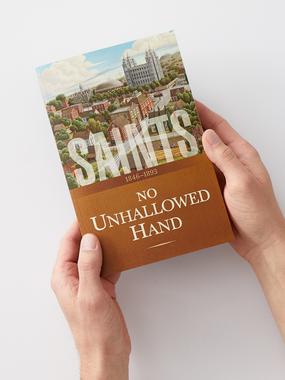 Saints is unlike past official histories of the Church. Each volume begins with meticulous research and original sources, which are then woven together by historians and writers using techniques of popular storytelling.

“People connect with stories,” said Scott A. Hales, the lead writer and literary editor of Saints. “Story has a way of teaching people but also entertaining them at the same time. One of the purposes of Saints is to teach the Saints their history. If you want to engage a reader, especially someone who doesn’t necessarily like history or is put off by academic writing, then narrative is the way to go — because everybody loves a good story.”

Writing a good story is one thing, but the team working on Saints is careful to stay true to the source materials.

“I had been used to writing in such a way that I could create all the details that I wanted in order to be able to draw the reader in,” said Angela Hallstrom, who helped write volume 2. “But as a writer for Saints, it’s extremely important that you stay very, very close to the source material. We can’t use any details that are not in the historical record and well sourced. It really is a challenge, but it’s a challenge that I’ve learned a lot from, to use actual historical records to try to create a strong and compelling narrative.”

In addition to the narrative, readers of Saints can follow footnotes to read the actual source documents behind the stories. Also scattered throughout the footnotes are references to Church History Topics, a collection of articles on hundreds of subjects found in the book. Topics are conveniently linked to in the digital version and can also be found on the Church’s website.

Elder Curtis said the feedback on Saints he has received from Church members since he became Church historian in April 2019 is overwhelmingly positive.

“What [Latter-day Saints] really seem to appreciate is the way the stories are told and that we get to see the warts people have as well as the very positive things about them,” he said. “They have told me how grateful they are to have this collection of stories that all go into the one big story of what it means to be a Latter-day Saint.”

Outside academics, some who are not Latter-day Saints, helped review the volumes and speak to their high quality. Laurel Thatcher Ulrich—a Pulitzer Prize-winning historian at Harvard University—praised Saints for its simple yet appealing prose.

“I’ve loved being a reviewer on Saints,” Ulrich said. “One of the things [this book] does so magnificently, I think, is take a very, very complex and deeply grounded story that’s been developed through a lot of very serious scholarship. It translates very sophisticated scholarship into an engaging and accessible narrative.”

The final volumes of Saints will be published in the next few years. Volume 3 will focus on the Church’s global growth and conclude with the dedication of the temple in Bern, Switzerland, in 1955. Volume 4 will bring readers to the recent past, relaying the ongoing challenges of membership growth and having temples located all over the world.

“I would hope that the ultimate result of [reading Saints] would be a deep appreciation of our ancestors and the sacrifices and the hardships they went through,” Elder Cook said. He added that he hopes such gratitude would empower Saints with the “strength and power to overcome the issues that face us today.”

The publication is available digitally in 14 languages. Print editions for all languages other than English will be available within a few months.