I recently came across a post on Twitter from a female member of the Church declaring that she has always had an issue with Nephi killing Laban. Dozens of other women commented and expressed similar discomfort with the account. 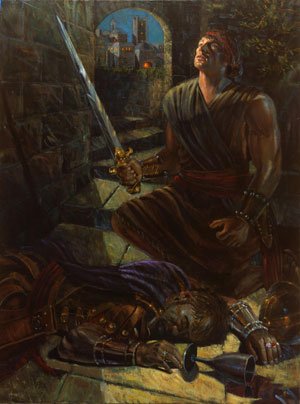 I sympathize with the fact that they are unsettled with the murder of Laban  – but I wonder if there might be something they are missing.

I think many people who read the story of Nephi and Laban miss it.

Did you know that there was a key phrase that the Spirit spoke to Nephi which triggered in him a remembrance of a promise that God had made to him?

This is important because it shows us that Nephi wasn’t just misinterpreting his thoughts with the Spirit, he was actually on the receiving end of a promise that had been given him.

As you recall, Nephi comes upon a drunken Laban and pulls out his sword. He is geeking out over the workmanship of the sword, and then he says, “I was constrained by the Spirit that I should kill Laban…”

The definition of constrained is “forced against your will” and clearly Nephi does not want to kill Laban. He tells us as much while recounting the experience 40 years later.

I said in my heart: Never at any time have I shed the blood of man. And I shrunk and would that I might not slay him. 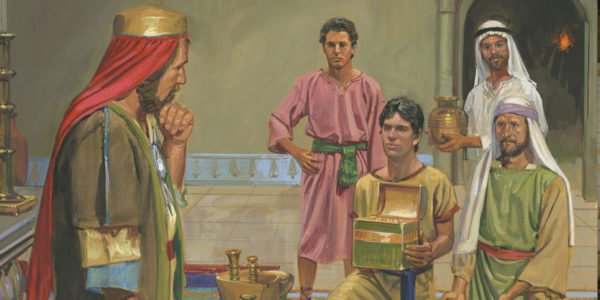 To be honest, he probably felt like a lot of people feel in our day.

But here’s the thing, did you know that Laban’s drunken state, and the opportunity placed before Nephi, was promised? It wasn’t just a voice in Nephi’s head.

In fact, it was a promise that an angel of God had delivered to Nephi just the night before.

You’ll recall that when the brothers returned from Laban’s palace downtrodden after having lost all of their possessions, Laman and Lemuel proceeded to beat Nephi with a rod when an angel appears. 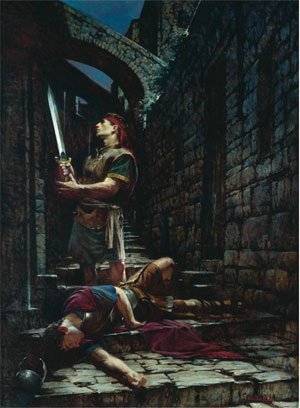 The angel asks them why they are beating their younger brother with a rod and then says:

Behold ye shall go up to Jerusalem again, and the Lord will deliver Laban into your hands.

Apparently this promise is pretty far-fetched considering who the angel was talking about. Crazy enough that Laman and Lemuel, after seeing an angel, are bold enough to say, How is it possible?

I mean, it was Laban after all, and he was a pretty intimidating guy.

How is it possible that the Lord will deliver Laban into our hands? Behold, he is a mighty man, and he can command fifty, yea, even he can slay fifty; then why not us?

Laman and Lemuel were just told by an angel of the Lord that Laban would be delivered into their hands, and they think it is impossible.

Now, why is this important? I’ll tell you.

You see, the following day Nephi is walking around Jerusalem and sees Laban drunk and on the ground passed out.

He pulls out the sword, admires it, and is then constrained by the Spirit to kill Laban. He shudders and says to himself, “I’m not doing that.”

The Spirit then speaks to him again and says, “Behold the Lord hath delivered him into thy hands.”

And then the proverbial light bulb goes off.

Right then, Nephi gets it.

This is the deliverance that was promised.

Laman and Lemuel weren’t going to believe it! The Laban who could command fifty or slay fifty, yes, that invincible Laban was there before Nephi. It was almost too good to be true.

What are the chances, right? If you were a betting man, you would say the probability of that happening was a million to one.

But if you are Nephi, and the night before you’d seen an angel of the Lord who said Laban would be delivered, then you would suddenly see how it is possible.

Laban was delivered right into their hands. Just as promised.

As soon as the Spirit reminds Nephi of the promise from the night before, Nephi begins to reason in his mind why the killing would be justifiable.

If you haven’t read this article by Book of Mormon Central, Was Nephi’s Slaying of Laban Legal, it is an absolute must-read. It explains how Nephi would be justified to an extent under the law for his actions.

For the last time, and after Nephi dissects the decision in his mind with all the reason he can muster, the message is communicated to Nephi one more time:

And it came to pass that the Spirit said unto me again: Slay him, for the Lord hath delivered him into thy hands;

When Nephi shrunk that he “might not do it” he perked up when the angel said, “Listen Nephi, I have delivered him into your hands. I’m doing exactly what I promised I would do last night. Don’t back down from the covenant I made to you.” 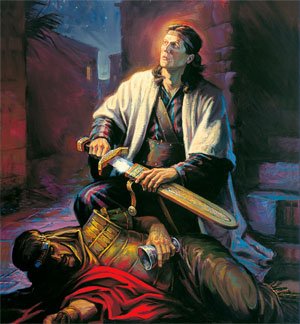 If you had told Laman, Lemuel, and Nephi that the Lord was going to deliver a drunken Laban to them  – they would most likely have thought that was pretty far-fetched.

But the Lord promised to deliver him into their hands, and that is exactly what he did.

Therefore this is thy gift; apply unto it, and blessed art thou, for it shall deliver you out of the hands of your enemies, when, if it were not so, they would slay you and bring your soul to destruction.

I had never connected these two scenes before – the angel’s promise to Nephi and his brethren, and the slaying of Laban, but it is a powerful example of one of the main themes of all scripture – God will deliver.

As Nephi shares in the first chapter of the Book of Mormon:

But behold, I, Nephi, will show unto you that the tender mercies of the Lord are over all those whom he hath chosen, because of their faith, to make them mighty even unto the power of deliverance.

The Lord in the Doctrine and Covenants 98:31-32 also declares his sanction of the actions of Nephi when he said:

Behold, this is the law I gave unto my servant Nephi, and thy fathers, Joseph, and Jacob, and Isaac, and Abraham, and all mine ancient prophets and apostles.

I’m grateful for Nephi and his goodness. It’s clear that he didn’t want to hurt Laban, but was aligned with the words of the angel and also the voice of the Spirit.

Does a knowledge that the deliverance of Laban was promised the night before make it easier for you to accept Nephi’s actions?

Written By
Ben Arkell
More from Ben Arkell
Amos Abplanalp was laid to rest this week after an eighteen month...
Read More
I recently came across a post on Twitter from a female member of the Church declaring that she has always had an issue with..." />