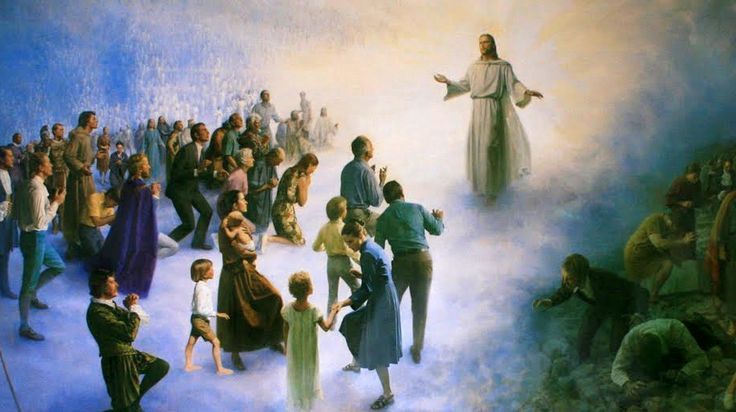 The following vision had been attributed to John Taylor, but some dispute whether it was his vision or not. The vision comes from the journal of Wilford Woodruff and it is verified that it was not Wilford Woodruff that had the vision.

I went to bed as usual at about 7:30 PM. I had been read­ing a revela­tion in the French lan­guage. My mind was calm, more so than usual if possible, so I composed myself for sleep, but could not. I felt a strange feeling come over me and apparently be­came partially uncon­scious. Still, I was not asleep, nor ex­actly awake, with dreary feeling.

The first thing that I recognized was that I was in the tabernacle of Ogden, Utah. I was sit­ting in the back part of the build­ing for fear they would call on me to preach, which however they did, for after sing­ing the second time they called me to the stand.

I arose to speak and said that I did­n’t know that I had anything es­pecially to say, ex­cept to bear my tes­timony of the Latter-day work, when all at once it seemed as if I was lifted out of myself and I said, “Yes, I have something to say and that is this: Some of my brethren have been ask­ing, “What is be­coming of us? What is the wind blowing?” I will answer you right here what is coming very shortly.”

I was then in a dream, im­mediately in the city of Salt Lake, and wandering around in the streets and in all parts of the city, and on the doors of the houses I found badges of mourn­ing and I could not find a house but was in mourning.

I passed my own house and found the same sign there, and I asked the ques­tion, “Is that me that is dead?” Someone gave me the an­swer, “No, you will get through it all.”

It seemed strange to me that I saw no person in the streets in all my wan­dering around the coun­try. I seemed to be in their houses with the sick, but saw no funeral proces­sion, nor anything of the kind, but the city looking still and as though the people were praying. And it seemed that they had controlled the dis­ease, but what the dis­ease was I did not learn; it was not made known to me. 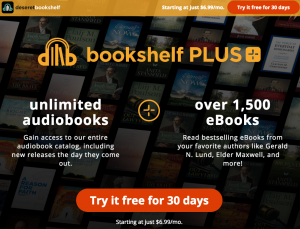 I then looked over the country, north, east, south, and west, and the same mourning was in every land and in every place.

The next thing I knew I was just this side of Omaha. It seemed though I was above the earth, and look­ing down upon it. As I passed along upon my way east I saw the road full of people, mostly women, with just what they could carry in bundles on their backs, trav­eling to the moun­tains on foot.

I won­dered how they would get through with such a small pack on their backs. It was re­markable to us[?] that there were so few men among them. It didn’t seem to me as though the cars were run­ning, the rails looked rusty and the roads aban­doned; and I have no con­ception of how I traveled as I looked down upon the peo­ple.

I continued east by the way of Omaha and Council Bluffs, which were full of disease. There were women every­where. The state of Illinois and Mis­souri were in a tumult, men killing one an­other, women joining the fight­ing, fam­ily against family in the most horrid manner.

I imagined next that I was in Wash­ington and I found desola­tion there. The White House was empty and the Halls of Congress the same, and everything in ru­ins. The people seemed to have left the city and left it to take care of itself.

I was in Baltimore. In the square where the Monument of 1812 stands in front of the Char­les Hotel. I saw dead piled up so as to fill the street square. I saw mothers cutting the throats of their own children for their blood. I saw them suck it from their throats to quench their own thirst and then lie down and die.

The water of Che­sapeake Bay was stagnant, and the stench arising from it on ac­count of their throw­ing their bod­ies into it so terrible, that the very smell carried death with it. I saw no man ex­cept they were dead or dying in the streets and very few women. Those I saw were crazy and in an ugly condi­tion. Everywhere I went I beheld the same sights all over the city; it was terrible be­yond description to look upon.

I thought this must be the end; but no, I was seemingly in an instant in the city of Philadel­phia. There eve­rything was still. No living soul was there to greet me. It seemed the whole city was with­out any inhabi­tants.

In the south of Chestnut Street and in fact everywhere I went, the putrefaction of the dead caused such a stench that it was impos­sible for any living thing to breathe, nor did I see any living thing in the city.

Next I found myself in Broadway, in the city of New York, and there it seemed the people had done the best they could to overcome the disease, but in wandering down Broad­way I saw the bodies of beautiful women lying, some dead and oth­ers in a dy­ing condition, on the sidewalks.

I saw men come out of cellars and ravish the per­sons of some that were yet alive and then kill them and rob their bodies of all the valu­ables they had upon them. Then before they could get back to the cellar they would roll over a time or two and die in ag­ony.

In some of the back streets I saw them kill some of their own offspring and eat their raw flesh, and in a few minutes die them­selves. Every­where I went I saw the same scene of horror and de­struction and death and rap­ine.

No car­riages, buggies, or cars were running; but death and de­struc­tion were every­where. Then I saw fire start and just at that moment a mighty East wind sprang up and car­ried the flames over the city and it burned until there was not a sin­gle building left standing there, even down to the water’s edge.

Wharves and shipping all seemed to burn and follow in common destruction where the “great city” was a short time ago. The stench from the bodies that were burn­ing was so great that it was carried a long dis­tance cross the Hudson Bay and carried death and destruction wherever it pene­trated.

I cannot paint in words the horror that seemed to compass me about; it was beyond description of man.

I sup­posed this was the end; but it was not. I was given to understand the same horror was being en­acted all over the coun­try, east, west, north, and south. Few were left alive, still there were some.

Immediately after I seemed to be standing on the left bank of the Mis­souri River, opposite e the City of In­de­pendence, but there was no city. I saw the whole state of Missouri and Illi­nois and all of Iowa, a complete desert with no living being there. 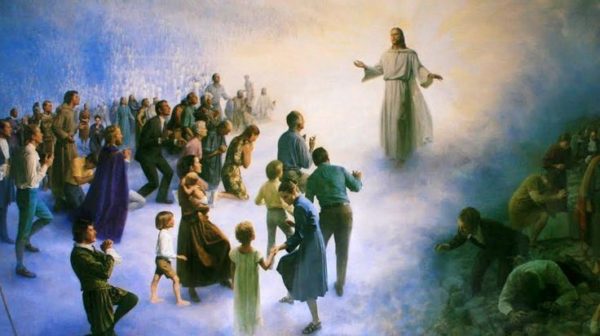 A short dis­tance from the river how­ever, I saw twelve men dressed in temple robes, stand­ing in a square or nearly so (and I under­stood it repre­sented the Twelve Gates of the New Jerusa­lem.) Their hands were uplifted in consecration of the ground and lay­ing the cornerstone of the tem­ple.

I saw myriads of an­gels hovering over them, and saw also an immense pil­lar of clouds over them and heard the angels singing the most heav­enly music. The words were “Now is estab­lished the King­dom of God and his Christ, which shall never more be thrown down.”

I saw people com­ing from the river and from the desert places a long way off to help build the temple and it seemed that hosts of an­gels all helped to get material to build with and I saw some of them who wore temple clothes come and build the tem­ple and the city, and all the time I saw the great pillar of clouds hovering over the place.

Instantly, however, I found my­self again in the taber­nacle at Ogden. And yet, I could still see the building go on and I got quite animated in call­ing on the people in the tabernacle to listen to the beautiful music, for the an­gels were singing the same music I had heard be­fore. “Now is estab­lished the King­dom of God and his Christ, which shall never more be thrown down.”

At this, I seemed to stagger back from the pulpit and Brother Francis D. Richards and some others caught my arm and prevented me from falling. Then I fin­ished so abruptly. Still even then I had not fainted, but was simply ex­hausted.

Then I rolled over in bed and awoke just as the city clock was strik­ing twelve.

Have You Seen Inside The Now Empty Salt Lake Temple?
← Previous
What You've Missed in the Story of Nephi Killing Laban
Next →
Comments are closed.
6 shares