President Russell M. Nelson put Latter-day Saints around the world on notice in October that the April 2020 general conference “will be different from any previous conference” because it “will commemorate the very foundations of the restored gospel.” Spring 2020 marks 200 years since Joseph Smith’s inaugural vision of the Father and the Son, known by members of The Church of Jesus Christ of Latter-day Saints as the First Vision.

Today President Nelson and his counselors in the First Presidency announced that the April 2020 general conference will be unique in another way: The Saturday evening session will be for all Latter-day Saints ages 11 and up.

“Rather than having the Priesthood session or the General Women’s Session, the Saturday evening session will be held for all members of the Young Women and Relief Society, and all holders of the Aaronic Priesthood and the Melchizedek Priesthood,” the First Presidency says in a letter. “We look forward to commemorating with members of the Church the 200th anniversary of the Restoration of the gospel of Jesus Christ at this historic conference and throughout the year 2020.”

See the letter from the First Presidency.

General conferences of the Church of Jesus Christ are held every six months on the first weekends of April and October. Each conference features sermons and music during the five sessions—three on Saturday and two on Sunday. Since April 2018, the Saturday evening session has alternated between the Priesthood Session (April) for all holders of priesthood ages 12 and older and the Women’s Session (October) for all women ages 8 and up. The other four sessions (Saturday morning, Saturday afternoon, Sunday morning, Sunday afternoon) are for all members of the Church and those interested in the faith. 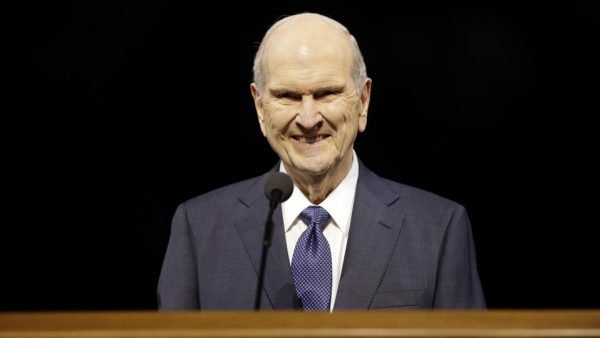 Now I would like to turn to another topic: plans for the coming year. In the springtime of the year 2020, it will be exactly 200 years since Joseph Smith experienced the theophany that we know as the First Vision. God the Father and His Beloved Son, Jesus Christ, appeared to Joseph, a 14-year-old youth. That event marked the onset of the Restoration of the gospel of Jesus Christ in its fulness, precisely as foretold in the Holy Bible.2

Then came a succession of visits from heavenly messengers, including Moroni, John the Baptist, and the early Apostles Peter, James, and John. Others followed, including Moses, Elias, and Elijah. Each brought divine authority to bless God’s children on the earth once again.

Miraculously, we have also received the Book of Mormon: Another Testament of Jesus Christ, a companion scripture to the Holy Bible. The revelations published in the Doctrine and Covenants and the Pearl of Great Price have also greatly enriched our understanding of God’s commandments and eternal truth.

The keys and offices of the priesthood have been restored, including the offices of Apostle, Seventy, patriarch, high priest, elder, bishop, priest, teacher, and deacon. And women who love the Lord serve valiantly in the Relief Society, Primary, Young Women, Sunday School, and other Church callings—all vital parts of the Restoration of the gospel of Jesus Christ in its fulness.

Thus, the year 2020 will be designated as a bicentennial year. General conference next April will be different from any previous conference. In the next six months, I hope that every member and every family will prepare for a unique conference that will commemorate the very foundations of the restored gospel.

VIDEO: Principal Unexpectedly Brings Latter-day Saint Student to Tears
← Previous
The Miracle that Led to the Reconstruction of the Nauvoo Temple
Next →
Comments are closed.
0 shares