The global leader of The Church of Jesus Christ of Latter-day Saints spoke Sunday to assembled Saints in Hanoi’s JW Marriott Grand Ballroom and then Monday in Ho Chi Minh City’s Vinpearl Grand Ballroom. In both instances, he expressed his gratitude to the government for the privilege to gather and worship.

The prophet recounted the short history of the Church in Vietnam—from the dedication of the land in 1966 by Elder Gordon B. Hinckley (1910–2008) to the Vietnamese government’s official recognition of the Church in 2016. President Nelson also noted that he met in Salt Lake City this past summer with a delegation headed by Vietnam’s Committee for Religious Affairs.

“We extended to them a very warm welcome. They offered an invitation to come visit. So here we are,” the 95-year-old President Nelson said in Hanoi. “I express to the leaders of the government and to all the leaders of Vietnam our heartfelt gratitude for the opportunity for our members of the Church to worship here in dignity.”

Just days before President Nelson’s arrival in Vietnam, the government granted the Church another important recognition. On November 14, 2019, Madam Thieu Thi Huong of the Vietnam Government Committee for Religious Affairs presented an official certificate authorizing Latter-day Saints to conduct religious activities in the country, in compliance with a new religious law established in 2018.

“We were thrilled with the announcement,” President Nelson said. “We are [also] very grateful to the [Church] leadership of this country. … I have great feelings of thanksgiving for you. You are very special.”

At a reception prior to the Sunday evening devotional in Hanoi, President Nelson and Elder Christofferson met Mr. Vu Chien Thang, chairman of the government Committee for Religious Affairs, as well as Hanoi mayor Mr. Nguyen Duc Chung and other prominent government leaders. On Monday, before traveling to Ho Chi Minh City, the Church leaders met again with Mayor Chung. He gave President Nelson and Elder Christofferson flowers and a miniature model of the Temple of Literature, the first university in Vietnam 1,000 years ago — a symbol of the importance of education. The Church leaders gave the mayor a small statue of a child’s first steps from mother to father to symbolize the faith’s attention to the family. 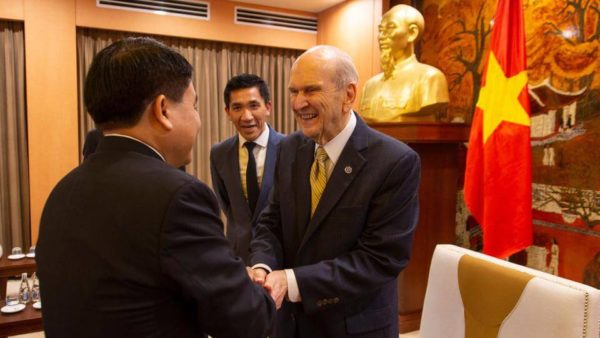 “[He is] very cordial, highly educated, highly principled,” President Nelson said of Mayor Chung. “He thanked us for the work that our people are doing in conjunction with the need for wheelchairs. … He knows there is a sense of value we teach, and he wants that in his country. Our meeting was brief, but he was very cordial.”

“He’s a very warm individual and a good friend,” Elder Christofferson added. “He has visited the United States before and Salt Lake City in particular. So we have some background and acquaintance already. It was like renewing friendships.”

In his sermons in Hanoi and Ho Chi Minh City, the prophet spoke of the eternal nature of the family and God’s personal love for them.

“We recognize the importance of families,” President Nelson said. “We rejoice in the revealed knowledge that families can be perpetuated and be here forever. I know that God loves you, He knows you, and He will bless you with every blessing He has in store for his faithful children. We are created in His image.” 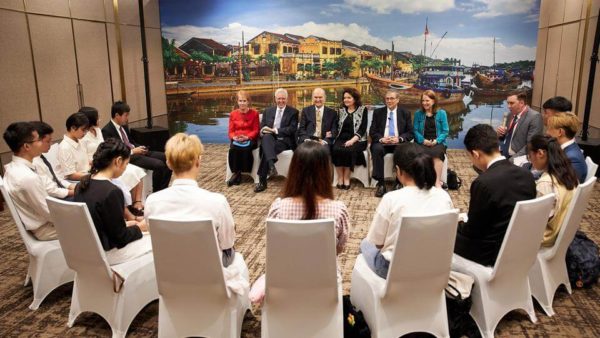 The prophet also told the Saints to love God and neighbor, have faith in Jesus Christ and embrace the gift of His infinite atonement, worship regularly, and engage in “real repentance.”

For those who say they have not done anything wrong and therefore do not need to repent, President Nelson reminded them what repentance is. “Repentance literally is conversion,” he said. “You turn away from the ways of the world and follow the ways of the Lord. That means we can become a little better each day than we were the day before. That is real repentance.”

President Nelson also encouraged the Saints of Hanoi to take responsibility for their own education.

Sister Wendy Nelson and Elder D. Todd Christofferson of the Quorum of the Twelve Apostles and his wife, Kathy, are with President Nelson on this seven-day trip to four Southeast Asia countries. Each spoke at the Sunday and Monday evening devotionals. 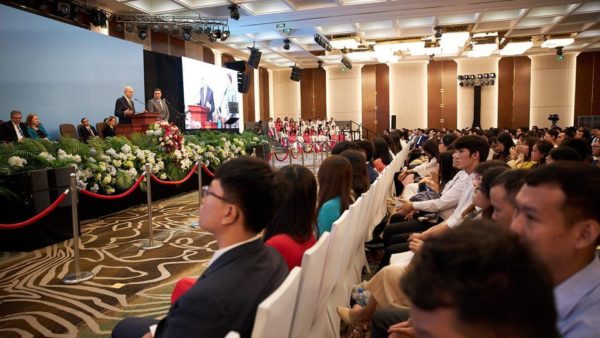 In an interview with Church media in after the devotional in Hanoi, Elder Christofferson noted that the small band of Latter-day Saint believers (432 came to the Sunday devotional) in Vietnam is infinitely important to God and to Church leaders.

“Even if one person had come [to the devotional], it would have been worth it,” Elder Christofferson said. “They are critical to the future, they are pioneers, and they have a particular place in His heart and in His mind. … I think it was a particularly significant message at this point to have the president of the Church come and see a relatively small group, and by his presence say, ‘You matter. You’re in our hearts and our minds and our prayers. The Lord is mindful of you. We’re mindful of you.’”