The Life of Emma Smith: An Elect Lady 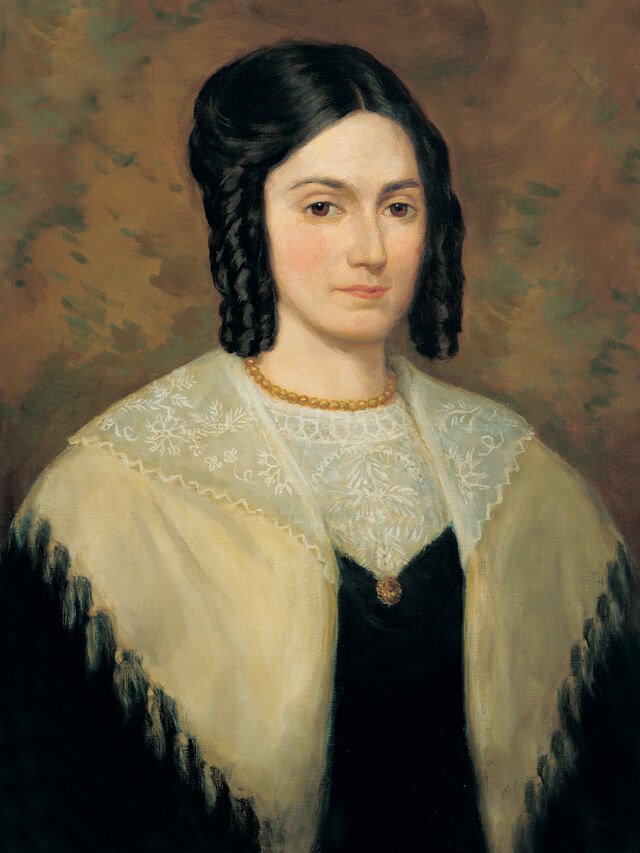 “I have never seen a woman in my life, who would endure every species of fatigue and hardship, from month to month, and from year to year, with that unflinching courage, zeal, and patience, which she has always done. … She has been tossed upon the ocean of uncertainty; … She has breasted the storms of persecution, and buffeted the rage of men and devils, … which have borne down almost any other woman.”1

Born on July 10, 1804, in Willingsborough (later Harmony), Pennsylvania, Emma Hale was the seventh of nine children of Isaac and Elizabeth Lewis Hale. The wealthy family lived on a 90-acre farm in the Susquehanna River Valley, where Isaac shipped meat and other merchandise downriver to Philadelphia and Baltimore.

As a child, Emma developed a deep sense of religious conviction and devotion to God. Methodism became popular in the Susquehanna region in the early 1800s, and Emma began attending with her mother at the age of seven.

A family tradition suggests that Isaac Hale overheard his young daughter Emma praying for him in the woods near their home and that this contributed to his spiritual conversion. Emma most likely attended the female seminary in Great Bend Township, and she later taught school.2

Emma was 21 years old when she met 19-year-old Joseph Smith at the end of October 1825. Joseph had come southwest from New York seeking employment in the Susquehanna Valley. His lack of education and resources contrasted with Emma’s respectable situation, but she was immediately impressed with his character and morals. They courted for several months while Joseph worked to improve his financial situation.

Isaac and Elizabeth Hale were opposed to the relationship, disapproving of Joseph’s religious pursuits and his work for Josiah Stowell, who had hired Joseph to help him dig for purported lost Spanish silver in the area. Emma and Joseph eloped on January 18, 1827, in South Bainbridge, New York, and then went to live with the Smith family. They returned to Pennsylvania in December 1827 to live near her family and work on the translation of the Book of Mormon.

Emma delivered a baby son who died soon after birth on June 15, 1828, when she nearly died herself. In September 1830, she and Joseph moved to Fayette, New York, to live with the Whitmer family. Emma left the Susquehanna Valley and the Hale family for the last time, never to see her parents and many other relatives again. She would eventually bear nine children and adopt two others, four of whom died at birth or shortly after, and two who died as toddlers.

Emma was baptized into the Church of Christ by Oliver Cowdery in Colesville, New York, on June 28, 1830, shortly after the Church was organized. An unruly crowd gathered, delaying Emma’s confirmation, and Joseph was arrested and imprisoned on charges of disorderly conduct.

When Joseph returned to Harmony, he received a revelation for Emma, now known as Doctrine and Covenants 25, calling her “an elect lady” and encouraging her to comfort and support Joseph in his afflictions. She was also charged to act as a scribe to Joseph, to expound the scriptures, to exhort the Church, and to coordinate the publication of sacred music in a hymnbook.

Emma had already assisted Joseph as a scribe during the early stages of the Book of Mormon translation. She soon began selecting the hymns to be sung in church meetings, working with W. W. Phelps to print some of them in 1832 in Church newspapers at a time when male clergy typically assumed responsibility for hymn selection. The first Latter-day Saint hymnbook was printed in Kirtland in 1835 under Emma Smith’s name.

Emma served the needy: in Kirtland, she and Elizabeth Ann Whitney coordinated feasts for the poor, and in Nauvoo, she opened her home to the sick, orphaned, and homeless. As the “elect lady,” she presided over the Female Relief Society of Nauvoo from its founding in 1842 until 1844, providing relief to new immigrants and destitute families. Her service in the Relief Society, however, achieved much more than benevolent work.

As president, Emma taught the women doctrine, managed membership, and publicly defended principles of moral purity. Emma was the first woman to receive temple ordinances; she then initiated other women in these sacred rituals. As the first lady of Nauvoo, she hosted diplomats in her home, made public appearances with Joseph at civic and community events, and presented political petitions in support of the Church and her husband.

Despite the difficulties of poverty, displacement, and persecution, Emma and Joseph maintained a deep love for and bond with each other. Their marriage faced unusual challenges due to the hardships of founding and leading the Church. Together they weathered the financial collapse and threats against Joseph’s life in Kirtland, Ohio; the persecution of Church members in Missouri; and the separation imposed by Joseph’s imprisonment in Liberty Jail.

Their correspondence reveals not only their difficult circumstances but their commitment to each other. “My heart is entwined around yours forever and ever,” Joseph wrote to Emma in 1838.3 Emma wrote to him in Liberty Jail in 1839: “I still live and am yet willing to suffer more if it is the will of kind Heaven, that I should for your sake.”4

Emma struggled deeply with the principle of plural marriage. Joseph introduced the practice carefully and incrementally, marrying many additional wives, each of whom vowed to keep their participation confidential. Little is known about Emma’s knowledge and feelings about these marriages, some of which entailed commitments in this life while others involved commitments for the next life only.

Nevertheless, it is apparent that Joseph withheld knowledge of some of these relationships from Emma. When he did share limited information with her, she struggled, shifting her perspective and support over time. In early 1843, Emma appears to have accepted plural marriage and personally consented to and witnessed Joseph’s marriages to four women. But by July, her attitude toward the practice had shifted again, and she burned a manuscript copy of the revelation on plural marriage now found in Doctrine and Covenants 132. There is no record Joseph entered into any additional marriages after the fall of 1843.5

Emma rarely spoke about the practice after Joseph’s death. After her death in 1879, her sons published a transcript of an interview in which she purportedly denied Joseph had ever sanctioned plural marriage.6 Notwithstanding the religious and emotional turmoil over this practice, Emma maintained a deep love for Joseph.

In June 1844, immediately preceding her husband’s death, Emma wrote, “I desire with all my heart to honor and respect my husband as my head, ever to live in his confidence and by acting in unison with him retain the place which God has given me by his side.”7

Joseph Smith’s death on June 27, 1844, created tremendous upheaval for Emma. In addition to grieving the loss of her husband, she was expecting their final child. The lack of a legal will placed both the Church and Emma’s family in uncertain financial conditions.

Disagreements erupted between Emma and Brigham Young, President of the Quorum of the Twelve, over the extent to which both the Smith family and the Church had a right to properties in Joseph’s name and were liable for his debts. When most of the Saints left for the Great Basin in 1846, Emma remained in Nauvoo, claiming the Mansion House and whatever she could for the support of her children. 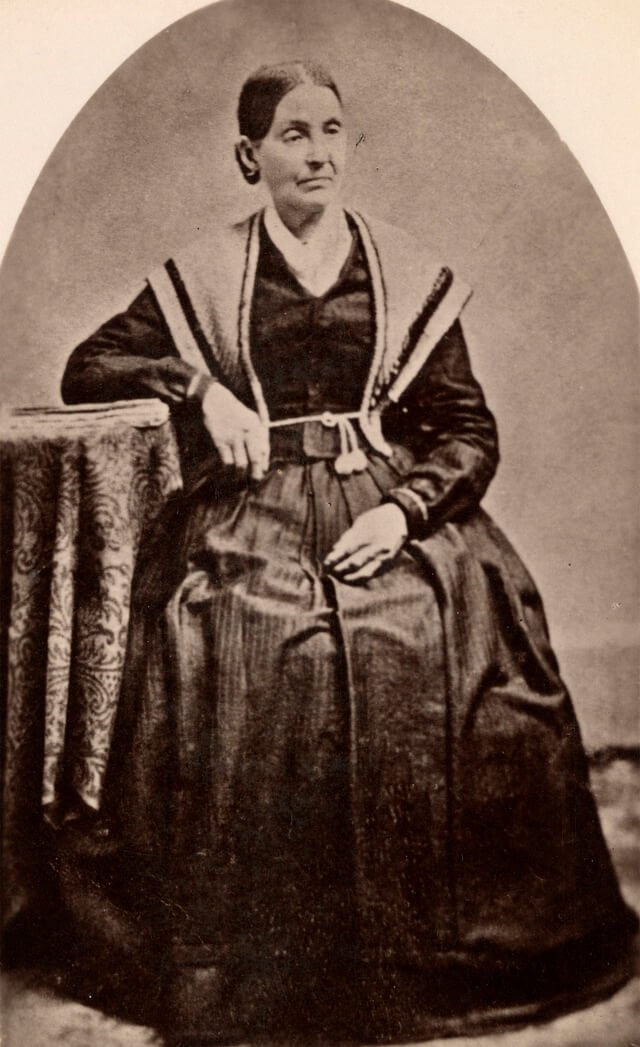 Emma Smith in her later years.

Although Emma remained estranged from Brigham Young and the Latter-day Saints in Utah, she maintained her belief in Joseph Smith’s prophetic role and in the divine truth of the Book of Mormon. “My belief is that the Book of Mormon is of divine authenticity—I have not the slightest doubt of it,” she testified in an interview she gave late in life.8 Emma Hale Smith Bidamon passed away in Nauvoo on April 30, 1879, and is buried next to Joseph. Her name and character have been both revered and misunderstood in Latter-day Saint memory, but her actions and influence cannot be erased.

“A Heart Full of Love and Faith: The Prophet’s Letters to His Family,” in Teachings of Presidents of the Church: Joseph Smith (Salt Lake City: The Church of Jesus Christ of Latter-day Saints, 2007), 238–47.

The following publications provide further information about this topic. By referring or linking you to these resources, we do not endorse or guarantee the content or the views of the author.

What is a Bishop's #1 Responsibility and How Members Can Help
← Previous
Please...I Am Going to Kill Myself Tomorrow
Next →
Comments are closed.
10 shares