Did the Angel Nephi or Angel Moroni Appear to Joseph Smith?

In 1823 an angel named Moroni appeared to Joseph Smith and told him of the existence of an ancient record engraved on plates, buried in a hill near his home.

Moroni, the last ancient record keeper to inscribe his teachings on the plates, appeared to Joseph on a number of occasions between 1823 and 1829, guiding and mentoring Joseph as he obtained the plates and translated them.

Though others produced fanciful or sensationalized accounts of the angel’s visits, Joseph Smith’s own accounts are simple, sober, and consistent. Joseph’s preparation to become a prophet began with his First Vision, but his early followers typically spoke of Moroni’s visit as marking the beginning of Joseph’s calling.1 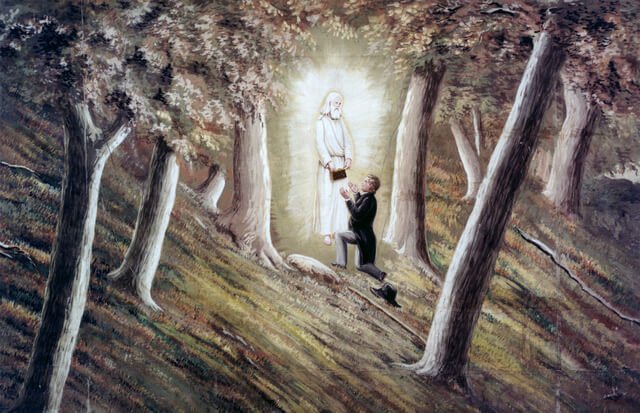 Depiction of Moroni’s appearance to Joseph Smith by C. C. A. Christensen.

The appearance of the angel was the first of Joseph Smith’s visionary experiences to appear in historical sources. An 1830 revelation declared that an angel with a “countenance [as] lightning” appeared to Joseph and “gave unto him power . . . that he should translate a book.”2

Joseph’s 1832 history recounts that the Lord “shewed unto me a heavenly vision for behold an angel of the Lord came and stood before me.”3 These and other early accounts referred to this messenger simply as “the angel.”4

In 1835, Joseph identified the angel as the Book of Mormon figure Moroni in a revelation published in the Doctrine and Covenants.5 His clearest statement on the angel’s identity appeared in an 1842 letter to the Saints: “And again, what do we hear? Glad tidings from Cumorah! Moroni, an angel from heaven, declaring the fulfillment of the prophets—the book to be revealed.”6

These accounts left no ambiguity as to the identity of the angel, but one key document complicated the picture. The earliest manuscript of the canonized account of Moroni’s visits (Joseph Smith—History 1:30–53) refers to the angel as “Nephi.”7  This reference likely originated with Joseph Smith’s clerk James Mulholland, who began in 1839 to combine various manuscripts of Joseph Smith’s history into a single narrative.

Was it Really Nephi or Moroni That Appeared to Joseph Smith? #moroni #josephsmith

Evidence suggests Mulholland did not take dictation from Joseph Smith but rather worked from sources available to him that have not survived. Mulholland could easily have been confused about the identity of the angel since many of Joseph’s earlier accounts before Mulholland’s draft did not mention the angel’s name.

Early published versions of Joseph Smith’s history, as well as other accounts that mention an angel “Nephi,” all relied on Mulholland’s draft. As a result, both “Nephi” and “Moroni” appeared in publications during the 1840s and 1860s. Brigham Young suspected the history contained a clerical error and assigned Church historians to research the issue.

Reviewing Joseph Smith’s other accounts of the angel, they concluded that the name “Nephi” should be replaced with “Moroni” and wrote a correction on the Mulholland manuscript itself.8 No evidence indicates that Joseph Smith ever called the angel “Nephi.” 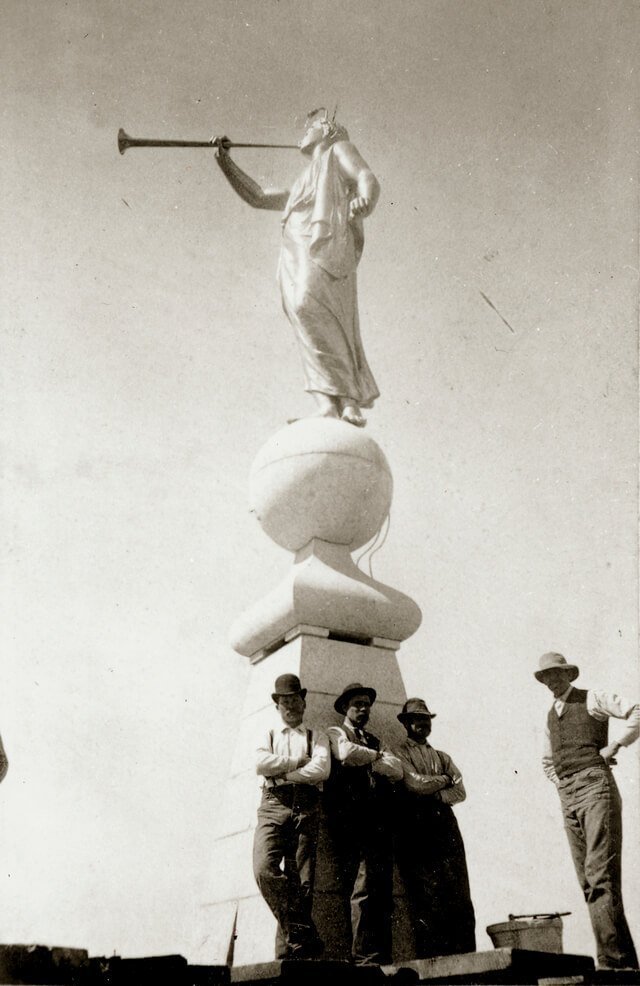 Statue of the angel Moroni atop the Salt Lake Temple shortly after it was installed.

Moroni’s appearance came to symbolize the Restoration, and statues of the angel Moroni now grace the spires of most Latter-day Saint temples. These statues had their precedent in 1892, when more than 50,000 Saints gathered to witness the laying of the capstone on the Salt Lake Temple. During the ceremony, President Wilford Woodruff activated an electrical switch, and a machine lowered the granite capstone into place.

Later that day, workers installed a gold-leafed, copper statue of an angel on the tallest spire. Though some identified the angel as Gabriel and others as “the angel fly[ing] in the midst of heaven,” referenced in Revelation 14:6, almost all Latter-day Saints since that capstone ceremony have identified the statue as the angel Moroni.9