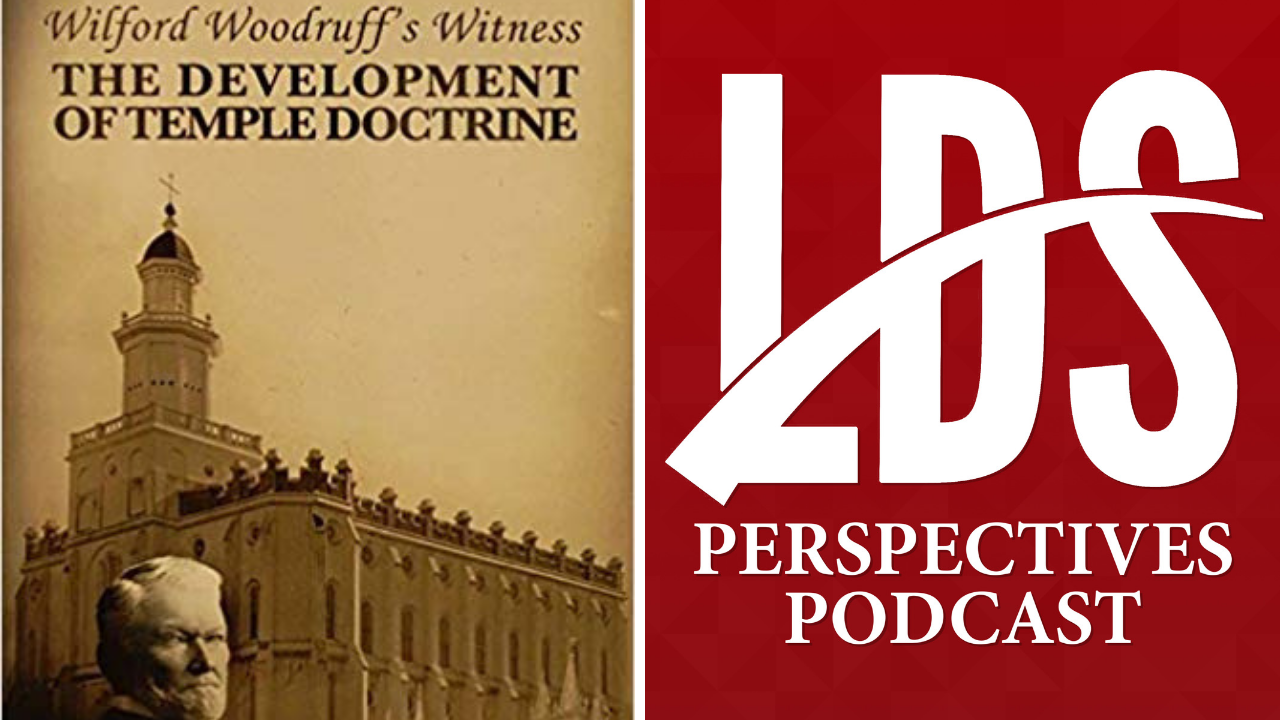 In this episode of the Latter-day Saint Perspectives podcast, Sarah Hatch has a conversation with Jennifer Ann Mackley about the book Wilford Woodruff’s Witness: The Development of Temple Doctrine, published in 2014. The main idea of the book is that Wilford Woodruff was a key witness to many changes in the doctrines about the Temple, and was himself instrumental in receiving many revelations as the prophet of the church, which altered temple doctrine.

The Evolution of Temple Doctrine

Anyone who attends the temple regularly understands the fact that our church is a church based on continuing revelation, and that temple doctrine and ordinances are not set in stone, but we receive revelation “line upon line and precept upon precept.”

When Mackley talks about the idea of continuing revelation, she does so in a unique manner. She says that:

“‘line upon line and precept upon precept,’ [isn’t] this grand staircase where one step led to the next and you could see the top of it and this goal that you were trying to reach. I kind of think of it like a (jigsaw) puzzle: (early church leaders) were given pieces but they had no box — like we have the box with the picture on it so we know what we’re putting together. They had no idea. It took such incredible faith to take that step into the darkness. Of asking the question, first of all, and then acting upon the answer. You can see God’s wisdom in not showing the whole puzzle because it would have been overwhelming. I mean a daunting task that would have been so discouraging or so unbelievably complex that it had to be one step at a time”

One example of this idea that Mackley gives is the temple doctrine of baptisms for the dead. The first time that this doctrine was revealed by Joseph Smith, people liked the doctrine, but they were not clear about how baptisms for the dead were supposed to be performed. Wilford Woodruff immediately thought of his mother, who had died when he was a toddler, and the idea of being baptized for her was thrilling for him, but Joseph needed to receive additional revelation to explain how the ordinance should be performed.

Many early members of the church immediately attempted to perform baptisms for the dead wherever they could and in whatever manner they felt was appropriate.

“[T]hey started to perform the baptisms in the Mississippi River. For Joseph Smith, the excitement was palpable and wonderful, then it was, “We need to make sure these are done correctly. So if everybody’s doing them in every river and stream, we need to go back and make sure that this is what the Lord wants.”  The revelation received was, “You need to do it in a special place, and that special place needs to be the temple.”

Members quickly began building a temple, so that they could perform this ordinance, and still there needed to be more revelation.

“Women were being baptized for men, and men for women. Again, they didn’t have detailed instructions. So then there was revelation that the witnesses had to be there to make sure that the instructions were being followed. They had never done this before.”

“[T]hat’s why he went to God to say, “I’ve got over 3,000 names. There’s men and women. I can’t do this myself. How do I accomplish this? What do you want me to do?” The answer was, “It’s okay to get help.” We think about that now and how we go to the temple and take any name, but back then it was an individual responsibility.”

Not only did the doctrines of baptism for the dead and an individual’s responsibility to perform proxy work for their dead ancestors evolve, but so did the concept of sealing.

“Sealing, as a concept, even in the church in Kirtland was completely different than we have now. It was limited. Sealing meant that you were recognizing a bond…. When the sealing of individuals was introduced, initially it was understood the same way. It was simply a sealing of the marriage covenant made in a non-religious ceremony or a non-LDS ceremony. You still make that promise to each other. So initially, it was just sealing that promise so that God would recognize the promise that a couple had made to each other. But again, Wilford Woodruff was the first one to record that sealing was of an individual: the husband and wife, together, to each other. That’s an understanding that didn’t occur until the 1840s — the idea that you seal one individual to another and then you seal children to parents. That changed everything. It wasn’t just, “God is recognizing the promise that you’ve made,” but you’re actually bound together for life and for eternity.”

“Some of the surprising things too were when Joseph Smith talked about baptism for the dead as ‘the welding link.’ There had to be something that linked us together. You read that in the Doctrine and Covenants 128, and you think, “Well, of course. That’s the sealing power of Elijah.” But, in 1840, the sealing ordinance hadn’t been introduced yet, so when he said, “That’s how we’re bound together,” it’s because baptism meant that we were baptized as brothers and sisters, as children of God, and we are part of His family. So of course we were bound together, but he had no idea that there were better things coming. We look back and can see it now, but it’s an amazing evolution of understanding and of blessings that they understood as a radical shift in their own thinking and how things would work.

We look now at the changes in temple doctrine, and they make a lot of sense, because we have many more pieces of the puzzle than the early saints and church leaders had. Thankfully, our church is a church guided by a living prophet and we believe in continuing revelation. We believe that we will yet receive many great and important things pertaining to the kingdom of God.

*This article contains an Amazon Affiliate link for the book Wilford Woodruff’s Witness: The Development of Temple Doctrine

Son Surprises Father with Helicopter Experience of a Lifetime
← Previous
Recreating the Book of Mormon World - Taylor Halverson and Tyler Griffin
Next →
Comments are closed.
3 shares