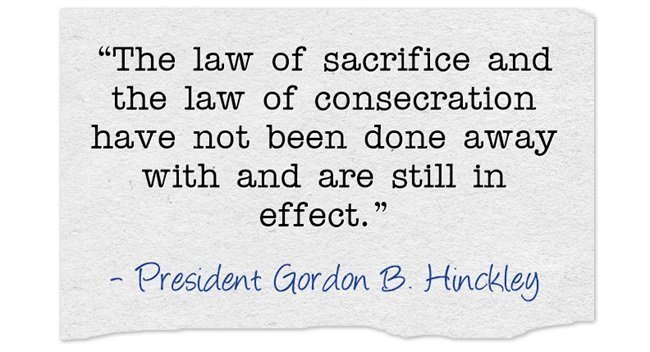 Tithing and The Law of Consecration

In this episode of Latter-day Saint Perspectives podcast, Dr. Steven Harper, a historian for the Church History Department of The Church of Jesus Christ of Latter-day Saints, discusses the Law of Consecration, and how it is currently applied in the church. Dr. Harper addresses several misconceptions about the law of consecration. Not everything that he mentions will be addressed in this synopsis, but three points Dr. Harper talks about are vital.

Some people compare the Law of Consecration to the Law of Moses. They say that the people in the time of Joseph Smith, couldn’t abide by the law, just as the people in the time of Moses couldn’t abide by the higher law. The law, according to these people, was taken from them, and then they were instructed to obey the lesser law of Tithing. Dr. Harper explains that this idea is false.

The Law of Consecration “didn’t get revoked or suspended or rescinded or anything else. It’s still here. We often, though, get confused because we’ve heard lots of times, “Well the law went away,” or, “They couldn’t do it so God took it away.” He doesn’t do that, so the law is still there, but what changes over time is what we might call tactics, or methods for carrying out the law, ways of enacting the law. That changes all the time, and that can be shown easily by history, but the laws of God remain. I sometimes, with my students, will show them how silly it sounds to substitute the law of chastity for the law of consecration, right? If we told the same story we tell with consecration but using chastity, it would go like this: God gave the law of chastity, but the early Saints had a hard time living it, so He rescinded it and gave them a lower law. “Sorry I gave you too much there, I’ll give you a lesser law.”

In reality, the Law of Consecration hasn’t gone away; we have the law but are given the agency to act on it as best as we can.

Dr. Harper talks about many early church members who fulfilled the Law of Consecration to the fullest. In fact, he states that it is amazing that so many people actually did honor the Law.

“The amazing thing is not that they stumble a bit. The miraculous thing is that they follow the revelations of Christ through their very young prophet, at enormous personal sacrifice, and with stunning unity. “Be one, and if you’re not one you’re not mine,” and they were one. They went to Ohio, and they received the revelation. They learned to do things that would purge from them over time their individualistic impulses, their selfishness, their materialism, and their material goods or gain for its own sake, as an end in itself. They learned to put those things away, so they could love God and love their neighbors.”

Many early church members did honor the Law of Consecration at an amazing personal sacrifice.

He gives a law and that gives the people at any time and place the power or agency to act for themselves. Just because some early members of the church couldn’t abide the Law of Consecration doesn’t mean that the Law was suddenly put on the back burner until the Saints became more righteous.

What is Meant by the Law of Consecration

The Law of Consecration is described fairly simply by Steven Harper. He boils it down to its essentials.

“We could say that the law of consecration is in verses 29 through about 33 of D&C 42, and pretty much it’s simply, “Remember the poor and consecrate of what you have for their support.” Relieve poverty or love God with all you have, with all your might and strength, which includes your spiritual gifts, your time, your physical means, whatever temporal means we have. That’s the law. It’s really that simple: love God, love your neighbor, love your neighbor so much that you do everything in your power to relieve suffering.

Consecration doesn’t mean to give your stuff away. It means to be sacred, to make it sacred, and we make ourselves and our stuff sacred by consecrating it to the purposes that God has commanded us to. The law clarified that consecration did not envision communal ownership of property, which is what a lot of people kind of think of as a socialized Idea. Rather, it required the willingness to acknowledge that the Lord was the owner of all and that each of the Saints was to be hardworking stewards over his own property and thus accountable to the actual owner of the stewardship.”