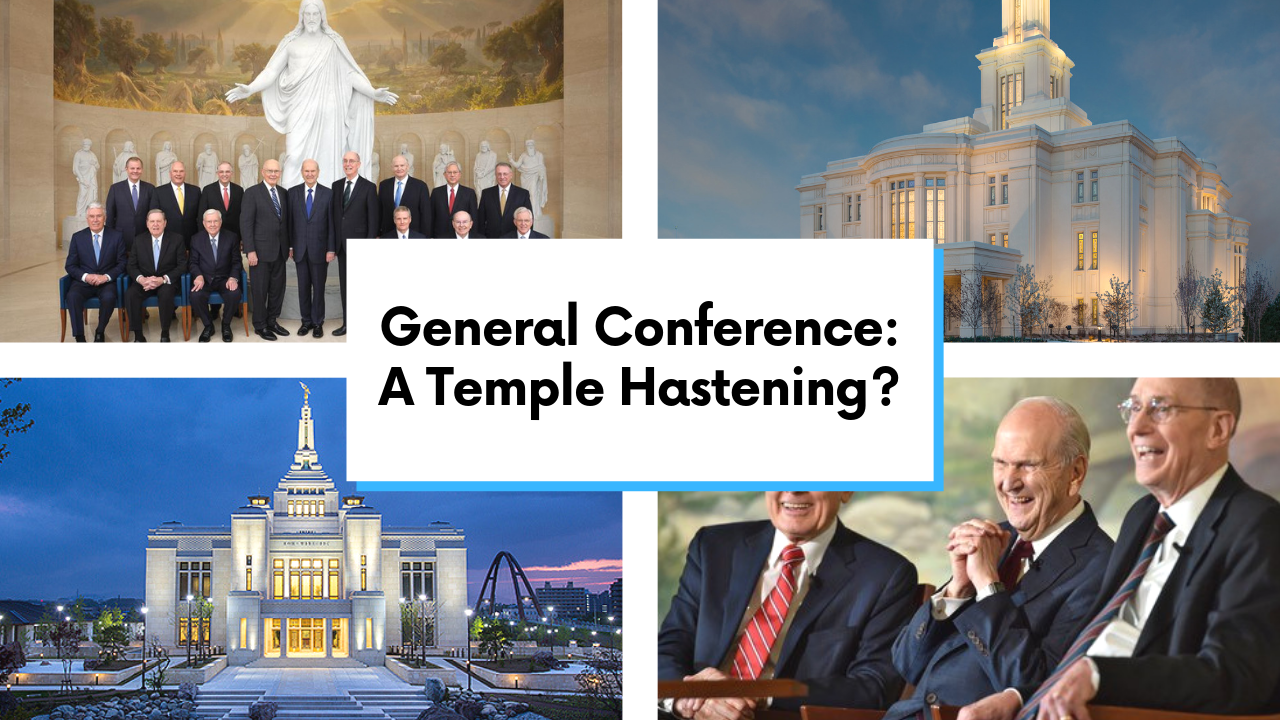 Last year there were multiple reports of a President Nelson quote that kept surfacing over and over. After the 5th independent report I heard, I knew I had to write about the infamous “snowflake in a snowstorm” quote.

It turns out a lot of people’s guesses regarding what would happen at General Conference were right, including the change to two-hour church.

As we approach another General Conference season, there’s another President Nelson quote that is raising eyebrows and causing excitement.

A Focus on the Temple 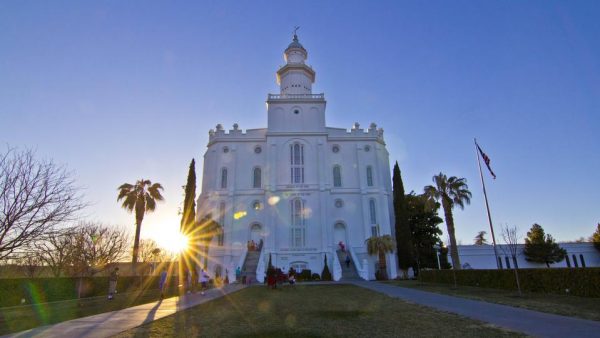 The ultimate goal is for members to be “endowed with power in a house of the Lord, sealed as families—faithful to covenants made in a temple,” which are key to “strengthening your life, your marriage and family, and your ability to resist the attacks of the adversary. Your worship in the temple and your service there for your ancestors will bless you with increased personal revelation and peace and will fortify your commitment to stay on the covenant path,” he said.

President Nelson has gone on to announce 19 new temples since April 2018  in the following locations:

The 12 temples announced in October 2018 were the most temples ever announced in the history of the church at one time. The 19 temples in one year were also the most ever.

After this announcement, it puts the total number of temples at 201, but what has some members buzzing is the thought of what is to come – because President Nelson doesn’t seem to want to take his foot off the temple building gas pedal. 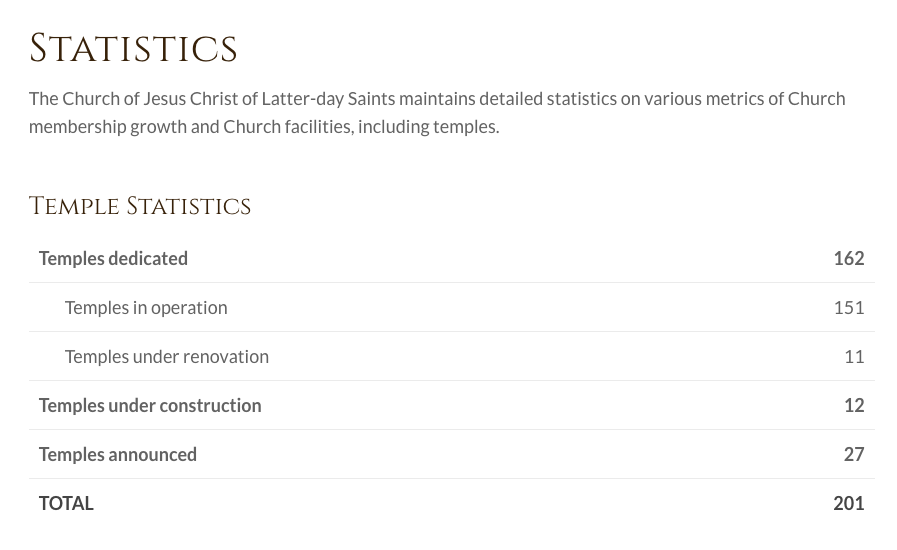 There is a feeling, based on reports of something President Nelson has said, that this could just be the beginning of a new era of temple building in the Church.

Well, what are people saying he said?

While commenting on the large number of temples presently in operation and under construction, President Nelson was overheard saying, “If you think we have a lot of temples now, try adding a zero.”

And my reaction was…

The number of temples is going to significantly increase. Temples will be announced and built at an acculturated pace.

(this one is serious)

I’ll admit, the first time I heard this quote, I was pumped but I took it with a grain of salt.

…Until I heard someone else report they heard the same words.

…And then another witness sharing something similar.

It reminded me of the same thing that happened before last General Conference when everyone kept saying they heard the brethren speak of the coming “snowstorm” of change.

Whether President Nelson did, in fact, say it or not, isn’t going to change the destiny of this church. Why? Because this era of temple building was foretold.

But, THOUSANDS OF TEMPLES!?!?

It turns out, it’s not a rumor, but prophecy. In 1856 President Brigham Young said:

…to accomplish this work there will have to be not only one temple but thousands of them, and thousands and tens of thousands of men and women will go into those temples and officiate for people who have lived as far back as the Lord shall reveal. [1]

President Hinckley expressed something similar in April 1998: “If temple ordinances are an essential part of the restored gospel, and I testify that they are, then we must provide the means by which they can be accomplished. … The temple ordinances become the crowning blessings the Church has to offer.”

From the 7 temples announced in April 2018 to 12 in October 2018, knowing President Nelson as we do, do we suspect that he’ll do anything but fill us with another rush of revelation? What a prophet!

Hopefully, the thought of the possibility of what COULD happen doesn’t distract us or disappoint us if it doesn’t happen when we think it will. (I know I was also disappointed when President Monson wouldn’t announce any new temples.)

Rumors That You Shouldn’t Bank On

There’s been a lot of talk about Word of Wisdom changes, or even the removal of the Word of Wisdom question from the temple recommend interview, but I don’t see that happening.

And the rumors about prospective missionaries receiving their missions calls that have no length of service mentioned, only that the length of service would be announced at General Conference. Nope, don’t buy it that one either.

How about the opening of China to missionary proselytizing? This is one of the oldest rumors in existence.

Lastly, the rumor I’ve been hearing for over 20 years, the infamous temple on a cruise ship idea – I don’t this will set sail.

One Last Intriguing One

Since the youth programs will be changing in 2020 thanks to the ending of the affiliation with the Boy Scouts of America, it appears that the Church, if the below reports are true, is piloting an adjustment to the frequency of weekly youth activities.

Assuming this actually is happening, and the results are positive, it would align well with the Church’s desire to reduce the stress and time commitment placed up local leaders. Freeing up two weeks a month would be a welcomed change for many. 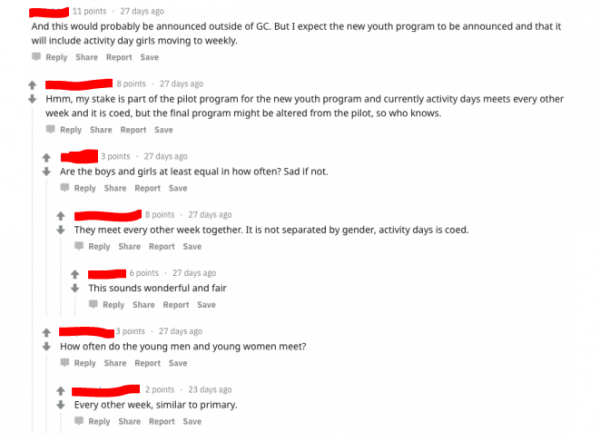 What You Can Count On

As one member put it in an online forum, here’s what you can REALLY count on for General Conference:

How to Prepare for Conference

While speculating about General Conference rumors is fun, don’t let it take away from the spiritual preparation necessary to truly get the most out of General Conference and have it be a feast. Let me suggest a few things you can do to prepare yourself for Conference.

We are led by prophets and apostles who are special witnesses of Jesus Christ. We will receive guidance from these chosen leaders that can keep us on a path of safety and peace. It the noise in the world gets too loud, and you don’t know who to follow, follow the prophets. 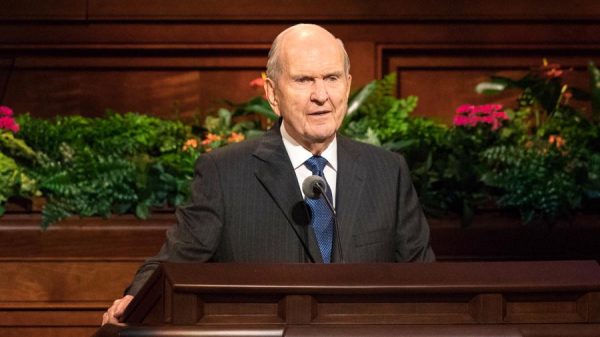 Perhaps the most powerful and impactful influence General Conference will have on our lives comes as we study the talks in the Ensign and seek for the Spirit to help us.

May we have the spiritual guidance to be led to those principles that will bring our families the blessings we need.

✪ What’s the secret to getting these TOP Latter-day Saint products for FREE? Just click here and they’re all yours > https://www.calledtoshare.com/4Free

Are there any announcements that you are hoping for?

Did You Catch What President Nelson Said at the Rome Italy Temple Dedication? You Might Shout for Joy!
← Previous
Changes to LGBTQ Policy Announced During General Conference Leadership Session
Next →
Comments are closed.
5 shares