Sister Esther Fletcher, a young missionary serving in the Netherlands, has prepared more than 2,000 copies of the Book of Mormon to give to missionaries for their investigators.

She glues a color-coded index page into the front of each book with questions from Preach My Gospel, and then marks 16 important passages with corresponding plastic page marker tabs. Multiply 2000 books times 16 references: Esther has marked more than 32,000 scriptures.

Esther began her mission in November 2016. However, her mission call was a little different. Esther has Down Syndrome. She was called at age 25 as a Church Service Missionary to accompany her parents, Thomas and Nancy Fletcher, on their 23-month senior Member-Leader Support (MLS) mission. 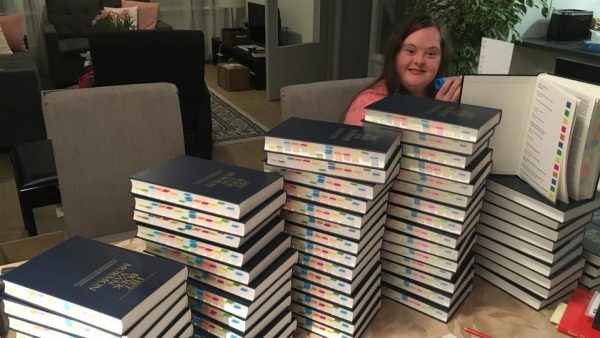 A few months after the Fletchers arrived, Robert L. Bunnell, then President of the Belgium/Netherlands Mission, learned about a scripture marking project and thought Esther might want to try it. She has surpassed everyone’s expectations. At first, Esther marked Dutch Books of Mormon. Later she also marked the English version, which is smaller in size and therefore a bit harder to work with.

Elder and Sister Fletcher reported on one conversion Esther’s work helped to bring about. A man from Eindhoven received one of the books Esther had prepared and read the scriptures she marked. These scriptures inspired him to learn more, and he later joined the Church.

Sister Esther Fletcher also learned some Dutch and often joins the full-time sister missionaries in teaching.  During lessons, Esther listens for topics she has marked in the Book of Mormon, and shares those scriptures.  Since biking is the major mode of transportation in the Netherlands, the Fletchers bought a tandem bike which the sisters use when Esther joins them.  She loves to go out on the tandem. 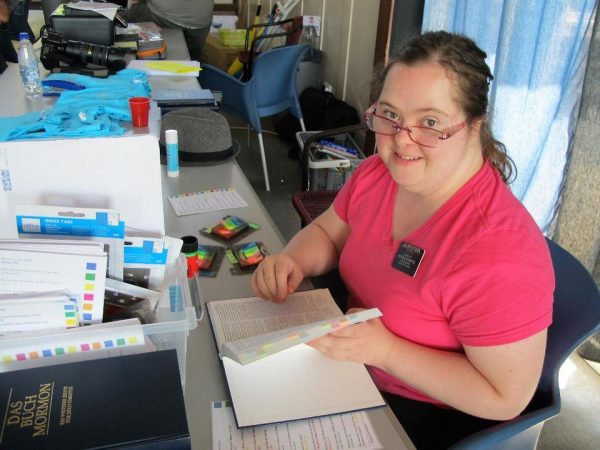 With 2 months left on her mission, Esther led a service project for a Young Single Adults conference in Eersel, Netherlands. She taught the participants how to mark German Books of Mormon as well as those in Dutch and English.

She is very careful about tab placement, making sure they are all straight and even. When asked how she does her work so well, she explained, “You have to be careful and accurate. I think you need to keep your hand steady and be precise. It takes a lot of practice.”

Written By
Official Newsroom
More from Official Newsroom
The Church recently granted an interview to the Deseret News and Church News to provide...
Read More
Sister Esther Fletcher, a young missionary serving in the Netherlands, has prepared more than 2,000 copies of the Book of Mormon to give to missionaries for..." />