Aside from Joseph Smith, The First Person to View the Gold Plates Was a Woman 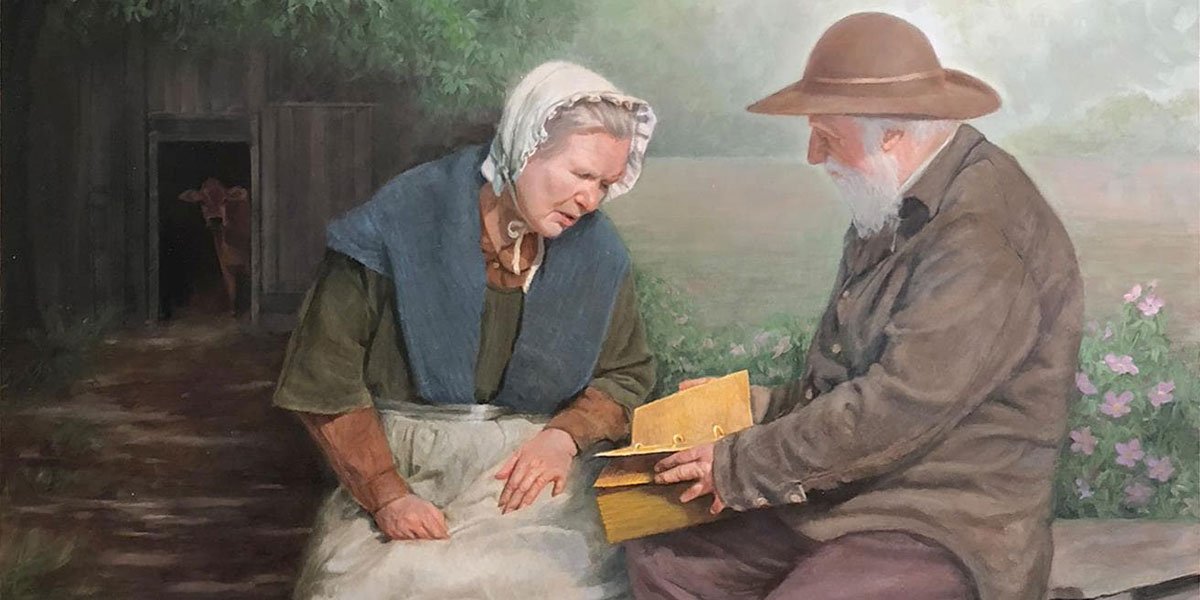 There is so much about church history that we don’t know, but technology and time have allowed us to learn so much more.

As an example, did you know that Mary Whitmer was the only woman to see the gold plates, and she saw them even before the three witnesses did?

In the new church history series, Saints, they share countless stories about the women of the church who have left a legacy of faith.

The following excerpt shares the story of Mary Whitmer’s faith and sacrifice which led to a miracle visit from Moroni.

“Once Joseph, Emma, and Oliver moved to Fayette, David’s mother had her hands full. Mary Whitmer and her husband, Peter, already had eight children between the ages of fifteen and thirty, and the few who did not still live at home resided nearby. Tending to their needs filled Mary’s days with work, and the three houseguests added more labor. Mary had faith in Joseph’s calling and did not complain, but she was getting tired.

The heat in Fayette that summer was sweltering. As Mary washed clothes and prepared meals, Joseph dictated the translation in an upstairs room. Oliver usually wrote for him, but occasionally Emma or one of the Whitmers took a turn with the pen.

Sometimes, when Joseph and Oliver tired of the strain of translating, they would walk out to a nearby pond and skip stones across the surface of the water.

Mary had little time to relax herself, and the added work and the strain placed on her were hard to bear.

One day, while she was out by the barn where the cows were milked, she saw a gray-haired man with a knapsack slung across his shoulder. His sudden appearance frightened her, but as he approached, he spoke to her in a kind voice that set her at ease.

“My name is Moroni,” he said. “You have become pretty tired with all the extra work you have to do.” He swung the knapsack off his shoulder, and Mary watched as he started to untie it.

“You have been very faithful and diligent in your labors,” he continued. “It is proper, therefore, that you should receive a witness that your faith may be strengthened.”

The Only Woman to View the Gold Plates | Mary Whitmer

Moroni opened his knapsack and removed the gold plates. He held them in front of her and turned their pages so she could see the writings on them. After he turned the last page, he urged her to be patient and faithful as she carried the extra burden a little longer. He promised she would be blessed for it.

You have been very faithful and diligent in your labors

The old man vanished a moment later, leaving Mary alone. She still had work to do, but that no longer troubled her.”¹

Book of Mormon Central provides the references for the full detail of Mary Whitmer, whose encounter is described in three separate accounts. The most famous is from her son, David:

…my mother was going to milk the cows, when she was met out near the yard by the same old man (judging by her description of him) [whom David had seen on the roadside in a prior incident] who said to her, ‘You have been very faithful and diligent in your labors, but you are tired because of the increase of your toil, it is proper therefore that you should receive a witness that your faith may be strengthened.’ Thereupon he showed her the plates.[2]

[The personage] turned the plates over, leaf after leaf, and also showed her the engravings upon them; after which he told her to be patient and faithful in bearing her burden a little longer, promising that if she would do so, she should be blessed; and her reward would be sure, if she proved faithful to the end. The personage then suddenly vanished with the plates, and where he went, she could not tell.[3]

More insights are offered by another granddaughter, who said Mary Whitmer was irritated when Joseph and Oliver took breaks from translating and “skated rocks on a pond.”  “[She] thought they might just as well carry her a bucket of water or chop a bit of wood . . .” and planned to order them out of her house. Such anxieties were relieved by Moroni’s timely visitation.[4]

BYU Studies also published an article by Robert T. Pack about Mary Whitmer and Moroni which gives some more context to the experience:

Our knowledge of Mary Whitmer’s experience comes mainly from an interview with her son David, recorded forty-nine years following the event.

In 1878, Elders Orson Pratt and Joseph F. Smith were called on a history fact-finding mission to Church historical sites in the Midwest and New England.3 On their way, they visited Richmond, Missouri, to interview David.

By that time, he had been separated from the Church for many years. Joseph F. Smith described David as “a good-sized man, 73 years of age last January, and well preserved. . . . He has a large head and a very pleasant manly countenance that one would readily perceive to be an index to a conscientious, honest heart.”4 David told the story of what happened during the first week of June 1829:

Joseph sent for me (D. W.) to come to Harmony to get him and Oliver and bring them to my father’s house. I did not know what to do, I was pressed with my work. I had some 20 acres to plow, so I concluded I would finish plowing and then go, I got up one morning to go to work as usual, and on going to the field, found between 5 and 7 acres of my ground had been plowed during the night.

I don’t know who did it; but it was done just as I would have done it myself, and the plow was left standing in the furrow.

This enabled me to start sooner. . . . When I was returning to Fayette with Joseph and Oliver all of us riding in the wagon, Oliver and I on an oldfashioned wooden spring seat and Joseph behind us, while traveling along in a clear open place, a very pleasant, nice-looking old man suddenly appeared by the side of our wagon who saluted us with, “good morning, it is very warm,” at the same time wiping his face or forehead with his hand. We returned the salutation, and by a sign from Joseph I invited him to ride if he was going our way. But he said very pleasantly, “No, I am going to Cumorah.” This name was something new to me, I did not know what Cumorah meant. We all gazed at him and at each other, and as I looked round enquiringly of Joseph the old man instantly disappeared, so that I did not see him again.

W. [David Whitmer] – I should think I did, he was, I should think, about 5 feet 8 or 9 inches tall and heavy set, about such a man as James Vancleave there,5but heavier, his face was as large, he was dressed in a suit of brown woolen clothes, his hair and beard were white like Brother Pratt’s, but his beard was not so heavy. I also remember that he had on his back a sort of knapsack with something in, shaped like a book. It was the messenger who had the plates, who had taken them from Joseph just prior to our starting from Harmony. Soon after our arrival home, I saw something which led me to the belief that the plates were placed or concealed in my father’s barn. I frankly asked Joseph if my supposition was right, and he told me it was. Sometime after this, my mother was going to milk the cows, when she was met out near the yard by the same old man (judging by her description of him) who said to her, “You have been very faithful and diligent in your labors, but you are tried because of the increase of your toil, it is proper therefore that you should receive a witness that your faith may be strengthened?” Thereupon he showed her the plates. My father and mother had a large family of their own, the addition to it therefore of Joseph, his wife Emma and Oliver very greatly increased the toil and anxiety of my mother. And although she had never complained she had sometimes felt that her labor was too much, or at least she was perhaps beginning to feel so. This circumstance, however, completely removed all such feelings, and nerved her up for her increased responsibilities.6

You can read more about Mary, and other stories of the early members of the Church, in Saints.

Mary Whitmer, according to her grandson who was the one who wrote about this experience, said that Mary ALWAYS said the old man's name was Nephi. David Whitmer, Mary's son, described his experience with an old man who Joseph, Oliver and David met as they traveled to Fayette, and was told by the man said he was on the way to Cumorah. He was carrying a knapsack which looked like it contained books, and David gave a description of him matching that of the man who appeared to his mother. David said Joseph told him the man was “a Nephite.” I was shocked to see that in Saints the words supposed to be said to Mary by the old man were “I am Moroni” in quotes!! Never did Mary say that. This man was, according to David, short and stocky and with a white beard.

Now compare that to the description given by Joseph of Moroni: Joseph Smith History 1:31 “He had on a loose robe of most exquisite whiteness. It was a whiteness beyond anything earthly I had ever seen; nor do I believe that any earthly thing could be made to appear so exceedingly white and brilliant. His hands were naked, and his arms also, a little above the wrist; so, also, were his feet naked, as were his legs, a little above the ankles. His head and neck were also bare. I could discover that he had no other clothing on but this robe, as it was open, so that I could see into his bosom. 32 Not only was his robe exceedingly white, but his whole person was glorious beyond description, and his countenance truly like lightning.

Unless one believes the glorified, resurrected Moroni was a shape-shifter, and that Mary Whitmer lied about his name, that story has become twisted, and I think it is sad it made it into the book Saints, which has so much else to recommend it.

Who did this painting?

Fools mock. The humble ask God. And then they believe the answer.

i am going to congratulate Ben Arkell, as i too felt that there should be both, sides allowed to speak freely. I have been a member of the Lords true church since 1978, and have recieved my own witness, of the truthfulness of the church and of the Book of Mormon, (testimony) no one can shake or take my testimony from me i am confident that i have to truth and i am not against those who dont understand from giving their veiw, it is only through the Holy spirit that we can know the truth of all things and those who are not able to feel the holy Spirit because of unbelief will not be able to know of spiritual truths.