Amos Abplanalp watched the results of America’s Got Talent from his hospital bed on August 22, 2017, as his daughter Evie Clair advanced to the semi-finals. He shared words of congratulation and encouragement to his daughter that were profound and prophetic.

They were captured in the video below.

I love you Evie, what an amazing job! I knew you’d make it. You are a light to the world; so…can’t be ignored!

Amos was not been able to see the fulfillment of his inspired statement, as he passed away September 7, 2017, after a painful battle with colon cancer.

This is a story about one of the greatest missionary forces that exist in the world today – yet one that you perhaps haven’t considered. A digital missionary force that has no boundaries, needs no sleep and can enter any country with no VISA needed.

This digital mission’s influence is just as real as any other, but companions who work together sometimes never meet, nor realize the true influence they have on the world.

Since that day, Evie Clair has most certainly been a light, traveling all over the world while sharing her beautiful voice and uplifting messages.

While her last year has been full of travel and song, performances and praise, one experience, in particular, has been most special to her.

That experience was learning of Laura Thomas.

Laura Thomas is a 22-year-old from Minnesota that has always been very religious, serving multiple missions for her Episcopal faith. She has a firm belief in God and is known by her friends to be very sensitive to things of the Spirit.

However, over the last few years, Laura had been struggling. “In a lot of ways 2017 was probably one of my hardest years,” she said.

Laura was stuck in a rut. She was questioning her relationship with God and struggling to find purpose in life as she felt there was a “piece of the puzzle that was missing.”¹

“There were a lot of personal things that happened and I felt like a huge piece of me was lost in all the turmoil of that year – and honestly, it was. I literally lost God. The yearning for finding what I lost was essentially what put me on the path to the restored gospel.

I unintentionally was searching for the peace that was lost and the peace that I hadn’t yet found in religion. It wasn’t until I heard a particular song that I knew I was missing something. I heard Evie Clair’s song, “Light the World.”

Evie Clair collaborated with Benson Baril as they sang “Light the World”, a song written by Benson’s mom, Sara, which was released during the Church’s “Light the World” campaign for the Christmas season.

Seeing this video reminded Laura of an encounter she had with Latter-Day Saint sister missionaries the previous year. She had been stopped on the street by the missionaries, who wanted to share a video with her and asked if they could pray for her. She was in a hurry, but since she was a Christian too, she agreed.

Looking back, I think it was honestly the most impactful video I have ever seen to date. Unknown to both me and the missionaries, they had just planted a very strong seed in my heart. At that time, I was not interested in meeting with them further as I was very involved in the college ministry that I attended on campus. However, they asked me if they could pray for me. I agreed and they prayed for me and we went on our merry ways.

Why Are We Doing This?

Shaundee Bull and her daughter, Lyza, sat in the driveway of McKay Crockett’s home, waiting to enter the studio to record a mashup for a YouTube video project of the Greatest Showman. Over the past few days and weeks, the pressures of YouTube were weighing heavily on the entire Bull family.

Questions like, “Why are we doing this again? Is it worth it? Why did we feel like we should start a YouTube channel?” kept resurfacing in their minds and in their conversations.

As Shaundee was sitting in her car she received a text from an unknown number.

A fan reached out to Shaundee to let her know the impact that Lyza’s videos had on her life. It was a long, beautiful text, and it was exactly what Shaundee needed to hear.

This fan shared that she had requested a free Book of Mormon online, and was contacted by two sister missionaries who wanted to schedule an appointment to drop off the book. This fan later said:

“I put off meeting with them for a while because I thought it was weird, but eventually, I agreed to meet with them in January of this year. I wanted to learn more, but I didn’t want to be converted.

The reason I decided to go through with it and meet with them was again because of music – 2 songs in particular. Lyza Bull’s songs “Anchor of the Soul” and “Master of the Ocean.” I can’t even express to you how much peace those songs gave me.”

Shaundee sat in her car, with tears flowing from her eyes, realizing that this was the exact message she needed to hear. After months of pressure, anxiety, and stress associated with the YouTube world, she caught a glimpse of the reason behind all of their efforts.

Lyza looked at her mom, a little worried. Shaundee handed the phone to Lyza, and after having the chance to read the text for herself, she was quickly in tears as well.

Shaundee sent screenshots of the text to her husband, who responded with a hashtag: #onlyoneviewmatters – meaning if they had touched one heart, from one view, then all the hard work was worth it.

The fan who reached out to Shaundeed and Lyza was none other than Laura Thomas.

“Laura’s text is what we needed,” Shaundee said. “It helped us refocus on the purpose of why we started YouTube in the first place, to be a light to the world.”

With a specific and personal reminder from God through His choice daughter Laura, Shaundee and Lyza entered the studio, recorded the vocals for the Greatest Showman video, and have seen it explode on YouTube, garnering over 9.8 million views to date – their most successful video by far. 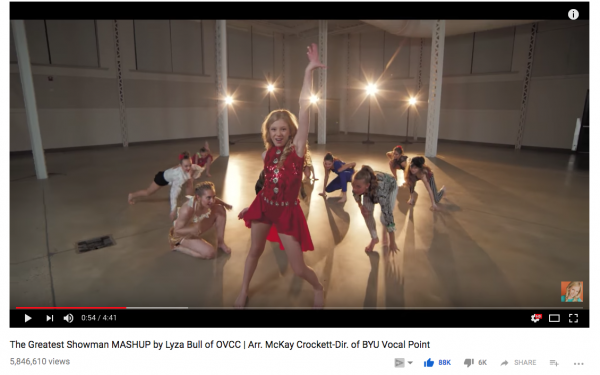 The significance? Every channel needs at least one viral video to keep it relevant. Now Lyza has it. This will ensure that her other videos with more Christ-centered messages can be seen by more people. Thus, the digital missionary work moves on, and others like Laura Thomas, will be found.

Evie and Lyza are both under 15 years of age and have never met in person. Yet, they worked together as digital companions to reach the heart of the one – a very incredible one, who was prepared to find the fullness of the gospel.

Many others make this digital missionary force such a powerful influence. From lyricists to arrangers, to videographers and sound technicians, there are dozens of people who are involved in producing these videos that helped reached Laura.

One such contributor, Angie Killian, wrote the lyrics and co-wrote the music for Master of the Ocean. I’ve known Angie for a few years and have been blessed personally by the wonderful music that she creates.

Laura took the time to record her conversion story and send it to me (which you can read here) so I passed that on to Angie. When I told her about Laura, she was ecstatic.

“When I heard her conversion story, I was overwhelmed with joy and gratitude that our song influenced her decision to meet with missionaries and eventually be baptized,” Angie said. “It was a sweet, humbling reminder of the reason I create music: to spread the light and love of our Savior.”

The Day of Laura’s Baptism

Laura took months to prepare for her baptism because she wanted to be 110% sure of her decision. She still had nerves the day of but went through with it and she had so much love and support from so many people.

There were 17 full-time missionaries in attendance that day that had a hand in teaching her – and two more member missionaries, Shaundee and Lyza, who were able to speak with Laura just before her baptism via FaceTime.

“This baptism made me feel complete. It gave me a fullness I had never felt before and I just felt overwhelmingly happy.  I sat in the bathroom and cried for like 3 minutes against the wall until my missionaries told me to hurry up (lovingly of course) and to change because people were waiting. ☺ I felt like I was getting a huge hug from the Lord and He was congratulating me. It was the best feeling. 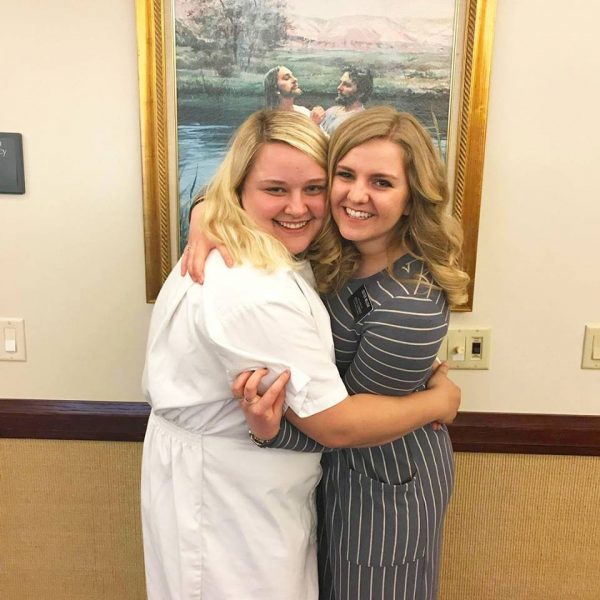 Quite literally, the missionaries, the Light the World campaign, as well as Lyza and Evie’s stunning music brought me eternal salvation. How beautiful that something or someone can do that for another human?”

Laura’s conversion story is a wonderful reminder of how the Lord uses the weak things of the earth to accomplish incredible things. It’s also beautiful to see strangers come together as part of the family of God.

Laura, while having connected with Shaundee and Lyza for months, had never been able to establish the same relationship with Evie and her mom, Hillary. However, a few months ago Laura commented on one of Evie’s Facebook posts, sharing with her how influential her music had been in Laura’s decision to meet with the missionaries.

Laura, Evie, and Hillary have since been able to FaceTime each other and share some special moments together virtually.

My favorite part of all of this is how I have been able to connect with Shaundee and Lyza Bull and Hillary and Evie Abplanalp. I feel so grateful that I have been able to share my story with the people who unknowingly changed and shaped my life into where it is at today.

“Of all the opportunities and praise I’ve been given over this past year, this one means the most to me. Influencing someone in any small way to turn their heart to the Savior is my greatest accomplishment,” Evie said.

Of all the opportunities and praise I’ve been given over this past year, this one means the most to me.

No matter your talents or abilities, God can use you to reach His children if you want to help.

Therefore, if ye have desires to serve God ye are called to the work

Sara Arkell, the pianist in the “Master of the Ocean” video, tries to share this message with all of her fans, with the hashtag #findyournote.

If you would have told Hillary and Shaundee ten years ago that their future teenage daughters would reach millions of people a month, they probably would have got a good laugh out of that.

But now it’s a reality.

God is gathering Israel. “Israel” is made up of His children. Laura Thomas is one of them, and Evie and Lyza will reach thousands more just as special and precious to God as she is.

Written By
Ben Arkell
More from Ben Arkell
Fasting is a great blessing, but it is also a large sacrifice....
Read More

Amos Abplanalp watched the results of America’s Got Talent from his hospital bed on August 22, 2017, as his daughter Evie Clair advanced to..." />