Evidence for the Reformed Egyptian Mentioned in the Book of Mormon 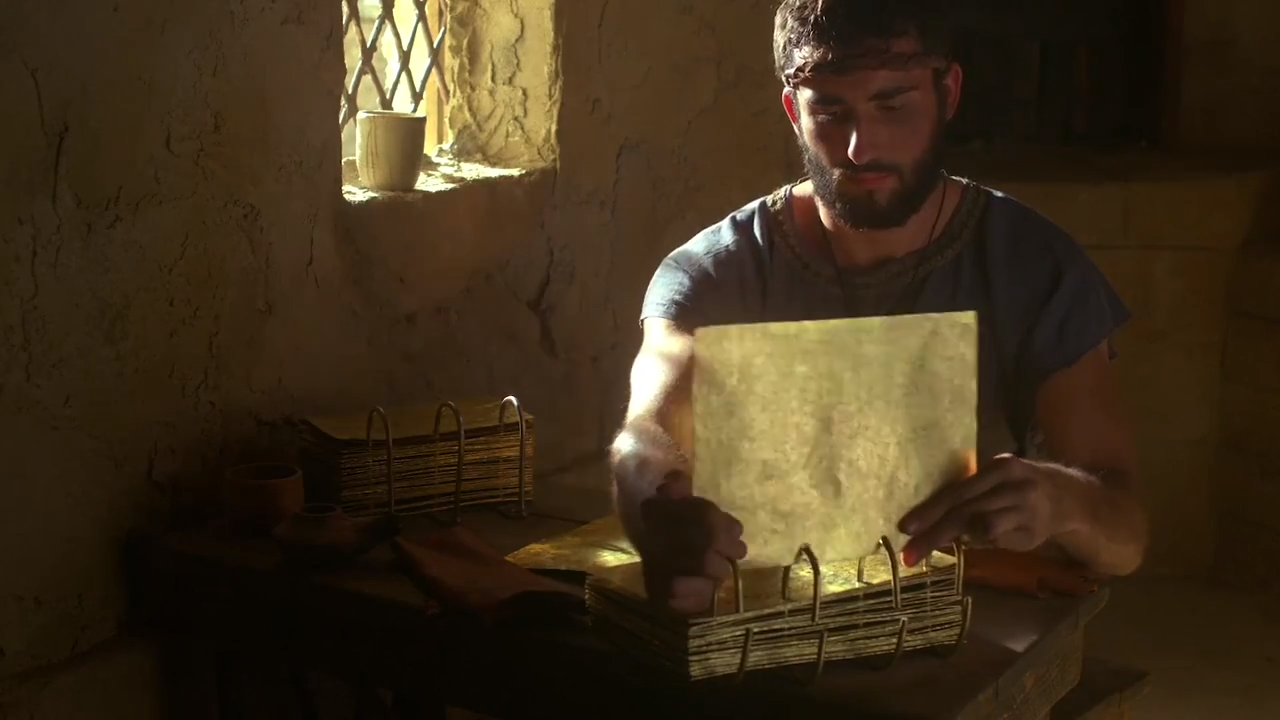 Book of Mormon Central has released a video tackling the oft-criticized claim that the gold plates were written in Reformed Egyptian. Just yesterday I was conversing with someone on Twitter who attacked the claim that Reformed Egyptian ever existed.

“The Book of Mormon uses the term “reformed Egyptian” in only one verse, Mormon 9:32, which says that “the characters which are called among us the reformed Egyptian, [were] handed down and altered by us, according to our manner of speech” and that “none other people knoweth our language.”

The book also says that its first author, Nephi, was taught both the “learning of the Jews and the language of the Egyptians” (1 Nephi 1:2), that the book was written in “reformed Egyptian” because that language took less space and was easier to engrave on gold plates than Hebrew, and that there was also an evolution of the Hebrew after the people left Jerusalem“.[1]

“Despite rampant “Egypt-o-mania” in the early nineteenth century, the notion of Jews writing in Egyptian was an unimaginable concept, and Joseph Smith was roundly criticized on this point by early Book of Mormon critics. In this respect, the Book of Mormon has aged better than its detractors.”2 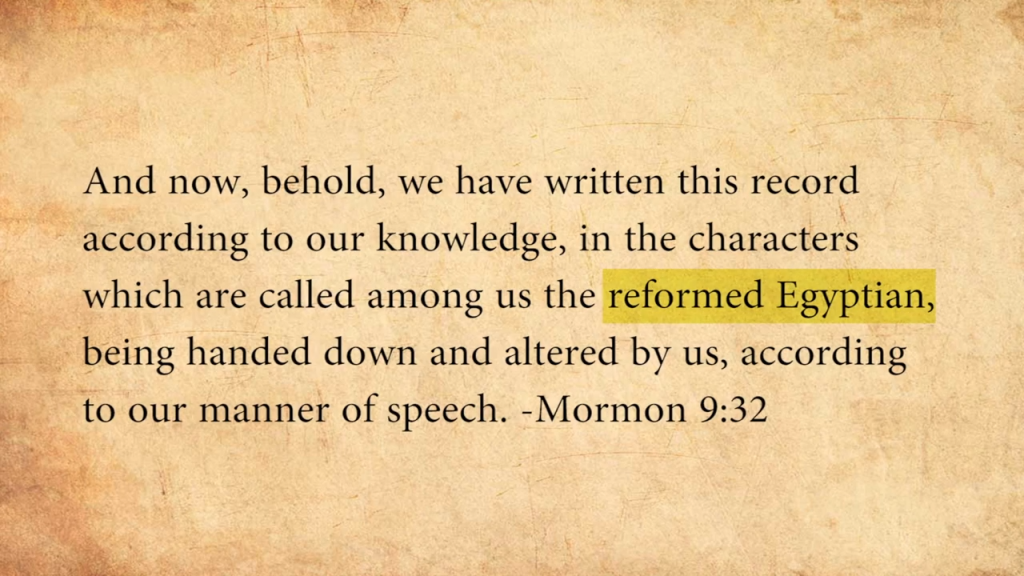 The implication is clear: Scribes or students contemporary or nearly contemporary with Lehi were being trained in both Hebrew and Egyptian writing systems. The use of Egyptian script by Lehi’s descendants now becomes not only plausible, but perfectly reasonable in the light of archaeological discoveries made more than a century after Joseph Smith translated the Book of Mormon.4

Watch the video below, and then take the opportunity to share this with others. You can do so on Twitter by clicking the text below.

I wonder that the Hebrews were learned in Egyptian due to their having some kind of close economic relationship for over 400 years. . . . pre-Moses, and may have modified their use of the Egyptian language. . .

Have any of you heard of the Demotic or Hieratic alphabets used by the Egyptians? Or read about the plates of metal buried in the foundations of Darius’ palace? There is evidence. My degree is from the University of Washington.

ACCORDING TO CRITICS THE LANGUAGE OF REFORMED EGYPTIAN ON THE GOLD PLATES MORMON PROPHET JOSEPH SMITH USED TO TRANSLATE THE BOOK OF MORMON DID NOT EXIST ARE THESE CRITICS NOW PROVING TO BE WRONG EXCAVATING A DRUMLIN KNOWN AS MORMON HILL OR THE CUMORAH ARCHAEOLOGISTS HAVE DISCOVERED GOLDEN PLATES BELIEVED TO BE LINKED TO JOSEPH SMITH JUNIOR IT IS IN THE SAME REFORMED EGYPTIAN /SYMBOLS USED IN JOSEPH SMITHS TRANSLATION THE BRIGHAM YOUNG UNIVERSITY ARE CURRENTLY LOOKING INTO THE AUTHENTICITY OF THESE PLATES CRITICS HAVE BEEN PROVED WRONG TIME AND TIME AGAIN AS ARCHAEOLOGY BACKS UP THE BOOK OF MORMON PERHAPS YOU NEED TO LOOK AT THE HISTORICAL RECORD OF THE NATIVE AMERICAN INDIANS THEY CLAIM A MAN CAME FROM THE HEAVENS HE HAD GREY GREEN EYES LIKE THE OCEAN HE WORE A WHITE ROBE HAD A TOGA AND GOLDEN SANDALS HE WALKED THE WATER CURED PEOPLE WITH HIS HANDS AND HAD TWELVE DISCIPLES HE HAD BEEN SEEN IN THE AMERICAS IT COULD BE NO ONE ELSE BUT JESUS CHRIST THE SON OF GOD AND FITS IN WITH THE BOOK OF MORMON OF JESUS CHRIST PREACHING THE GOSPEL TO THE PEOPLE OF THE AMERICAS.

Mbender, believing the Holy Bible as a source of verified historical, archaeological, and anthropological facts is much easier and more cogent than believing the Book of Mormon and the Book of Abraham to be non-fiction. The historicity of the Bible has been established through biblical archaeology and anthropology since the mid-1800s. Over 5,000 copies of the books of the Bible have been discovered in the Holy Land to document the reliability of the Bible, as Paul the Apostle stated, "for doctrine, reproof, correction, and instruction in righteousness." 'Nothing" tangible has been discovered in North America, South America, or Mesoamerica to document the fictional civilizations mentioned. I recall the man, Jack West, who used the Toltec, Mayan, Aztec, and Incan civilizations and the ruins from their ancient cities during the 1970s to represent the Nephite and Lamanite civilizations in the BOM. This was a big bunch of malarkey, but many rank-and-file Mormons gobbled-up the propaganda he produced in films and in his book, "The Trial of the Stick of Joseph." No Mormon likes to recall Thomas Stuart Ferguson and his six year quest for Book of Mormon proof in Mesoamerica and South America using professional archaeologists and a grant from Mormon Prophet David O. McKay of $300,000 in the early 1960s to establish the New World Archeological Foundation, the forerunner of BYU's FARMS. Ferguson began his quest a believer in Mormonism, but ended his search not believing at all in the BOM or the BOA.

How can you believe in something that has no real factual basis? Everything that Joseph Smith, Jr. wrote about, and in, the BOM has been proven false by science. The only thing that you can do to propose some truth in the BOM is to wildly speculate on things so bizarre that they are really unbelievable. It's just like the DNA study with 5,000 native Peruvians that was done by BYU during the late 1990s, financed by James Ferguson of Arizona. It was to test what Mormon Prophet spencer W. Kimball had said to thousands of Peruvian Mormons in 1983, "That the Hebrew blood of Lehi was flowing in their veins." The DNA study adduced that 98 percent of the Peruvians were products of Mongolian Siberia, with 2 percent European stock.

@Norton Nowlin, M.A., Did you know that the BoM does not mention central or south america? Did you know that not even Joseph Smith claimed that the Nephites lived in central or south america? In fact he on multiple occasions made it clear that it occurred on the north american continent primarily in what is now the the eastern part of the US. Have you heard of the mound builders civilization? What we know about them is very consistent with what is described in the BoM. If you are interested check out Wayne May's expositions on youtube. Plenty of evidence exists. On DNA I'm afraid you're also behind the curve. The human genome project in the 90's discovered a haplogroup dubbed the X2 haplogroup. This genetic profile's closest relative belongs to the Druze people, a middle-eastern bloodline that has ties to Israel. People who are of the X2 haplogroup are not from south or central america. They are indigenous peoples of the Algonquin language speaking tribes in North America. All of this is consistent with the BoM that contains promises connected to a land that would be a land of freedom and prosperity, free from kings and dictators. My point to all of this is that evidence for the BoM is growing, not diminishing, and the is BoM proving to be more believable, not less, over time.

I get the feeling that there are some or maybe many that would be inclined to not believe the bible as we have it, without some kind of proof.