What do Latter-day Saints believe? You likely have a lot more in common than you thought. Buckle up because you’re about to hear a lot of Mormon beliefs coming at you rapid fire. You will find a video below that lists 60 Mormon beliefs in 60 seconds.

Gordon B. Hinckley, 15th President of the Church of Jesus Christ of Latter-day Saints said the following:

“Let me say that we appreciate the truth in all churches and the good which they do. We say to the people, in effect, you bring with you all the good that you have, and then let us see if we can add to it. That is the spirit of this work. That is the essence of our missionary service.”

bring with you all the good that you have, and then let us see if we can add to it.

The tenants of the Mormon faith are encapsulated in the Articles of Faith, a list of 13 declarations from the prophet Joseph Smith which declare the beliefs of members of the Church of Jesus Christ of Latter-day Saints.

1 We believe in God, the Eternal Father, and in His Son, Jesus Christ, and in the Holy Ghost.

2 We believe that men will be punished for their own sins, and not for Adam’s transgression.

3 We believe that through the Atonement of Christ, all mankind may be saved, by obedience to the laws and ordinances of the Gospel.

4 We believe that the first principles and ordinances of the Gospel are: first, Faith in the Lord Jesus Christ; second, Repentance; third, Baptism by immersion for the remissionof sins; fourth, Laying on of hands for the gift of the Holy Ghost.

5 We believe that a man must be called of God, by prophecy, and by the laying on of hands by those who are in authority, to preach the Gospel and administer in the ordinances thereof.

6 We believe in the same organization that existed in the Primitive Church, namely, apostles, prophets, pastors, teachers, evangelists, and so forth.

7 We believe in the gift of tongues, prophecy, revelation, visions, healing, interpretation of tongues, and so forth.

9 We believe all that God has revealed, all that He does now reveal, and we believe that He will yet reveal many great and important things pertaining to the Kingdom of God.

10 We believe in the literal gathering of Israel and in the restoration of the Ten Tribes; that Zion (the New Jerusalem) will be built upon the American continent; that Christ will reign personally upon the earth; and, that the earth will be renewed and receive its paradisiacal glory.

11 We claim the privilege of worshiping Almighty God according to the dictates of our own conscience, and allow all men the same privilege, let them worship how, where, or what they may.

12 We believe in being subject to kings, presidents, rulers, and magistrates, in obeying, honoring, and sustaining the law.

13 We believe in being honest, true, chaste, benevolent, virtuous, and in doing good to all men; indeed, we may say that we follow the admonition of Paul—We believe all things, we hope all things, we have endured many things, and hope to be able to endure all things. If there is anything virtuous, lovely, or of good report or praiseworthy, we seek after these things. 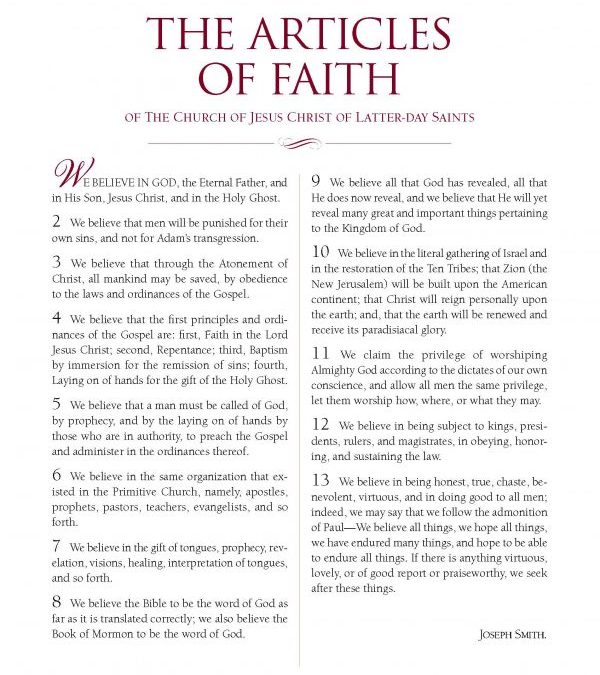