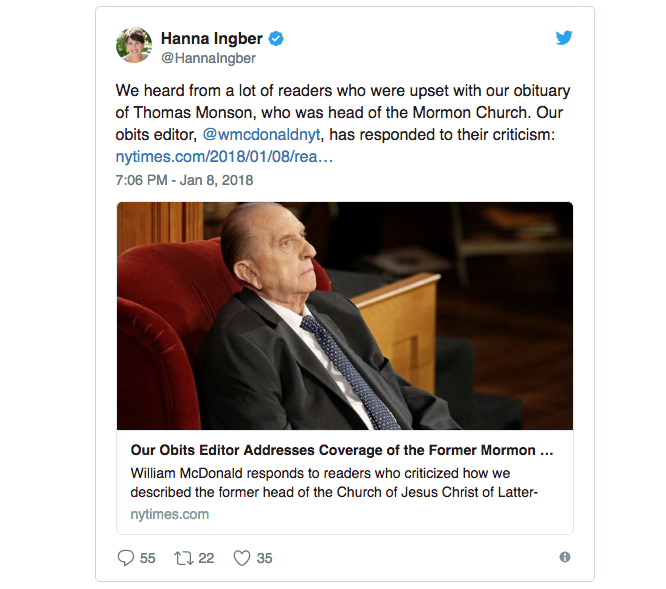 By now, you’ve most likely heard how The New York Times reported on the death of President Thomas S. Monson. It was a politically charged synopsis of the major events of President Monson’s tenure, and it left many members of the church disgusted.

How do you feel about the issue?

There is obvious angst for at least 150,000 people who signed this Change.org petition calling out the New York times and asking them to “formally apologize for this bias in reporting and present an honest, neutral, and balanced obituary.”

Well, the petition kind of worked.

The New York times obituary editor, William McDonald, issued a statement in response to the thousands of messages and comments that were sent to The New York Times.

If you were hoping to feel better after reading his response, you probably won’t.

“I think the obituary was a faithful accounting of the more prominent issues that Mr. Monson encountered and dealt with publicly during his tenure,” wrote McDonald. “In 20/20 hindsight, we might have paid more attention to the high regard with which he was held within the church. I think by his very position in the church, all that was implied. But perhaps we should have stated it more plainly.”

McDonald did point out that they made mention of some of the highlights of Monson’s tenure. “I think we also gave due credit to Mr. Monson’s achievements: his openness to new work by scholars of the church, “allowing them,” as we said, “remarkable access to church records”; his expansion of the church’s global missionary force and his doubling the number of young women in the missionary ranks; and his embracing humanitarian causes, often in collaboration with Jewish, Muslim and other Christian groups.” 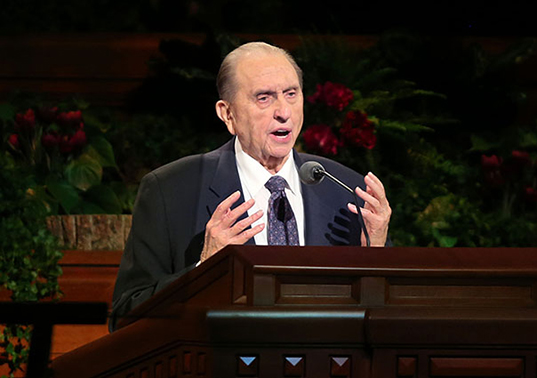 President Thomas S. Monson speaks during the priesthood session of the 185th Semiannual General Conference of The Church of Jesus Christ of Latter-day Saints Saturday, Oct. 3, 2015, in Salt Lake City.

McDonald responded to a few specific question that are listed in The New York Times article, one being: “Many Mormon readers did not think the obituary for Mr. Monson reflected the positive feelings that much of the Mormon community had for him. When writing an obit for a religious leader, is there an obligation to pay tribute in any way?

His response? “We’re not in the business of paying tribute. We’re journalists first and foremost. I think in tracing the life of a religious leader, it would almost go without saying that he or she had won the respect and admiration of those who put them in positions to lead.”

I would recommend you visit The New York Times article and read the whole response for yourself, which some are calling an apology. Others are calling it a “non-apology apology.” I tend to agree with the second opinion.

The New York Times Non-Apology and Why We Should Care

But why does this all matter?

Even within the church, there is a great divide of reaction and opinion. Some have said to me directly, “Don’t take offense”, while others ask, “Would President Monson want you making a big deal of this?” On the other side of the fence are those like Nathan Cunningham, who created the petition on Change.org, asking for an open apology from The New York Times for attacking the character of Thomas S. Monson.

I’ve wrestled with this myself over the last few days, and while I can’t say that I ever expected The New York Times or any other publication to shower praise on the prophet, I was definitely disappointed and perhaps unsettled at how the world choses to remember a man I call a prophet of God.

Some of the thoughts that have come to my mind in the last few days include a quote from Edmund Burke who said, “All that is necessary for evil to triumph is for good men to do nothing.” We additionally have the directive to “Let your light so shine before men, that they may see your good works, and glorify your Father which is in heaven.” Would this admonition perhaps allow us the liberty as well to let the world know of the light that President Monson shone, that the world may recognize all of his goods works so glory can be given to God?

Can any good come from people defending Thomas S. Monson’s character and asking The New York Times to apologize. I think so.

In McDonald’s own words, “We have to let the facts of the life paint the picture. In my experience, when we do that fairly and accurately, there are few complaints.” The fact that there were so many complaints has sent a message that their reporting wasn’t fair. If nothing else, William McDonald hopefully knows more about the goodness of President Monson.

The way The New York Times treated the life of President Thomas S. Monson was nothing but fulfilled prophecy, which I was reminded of as I was reading in the Book of Mormon.

Tell me if you think this is an accurate portrayal of what the obituary editor has done:

Who justify the wicked for reward, and take away the righteousness of the righteous from him! – 2 Nephi 15:23

In my mind, this is exactly what was done. They stripped the righteousness from a righteous man, and were more prone to justify the wicked in previous obituaries as can be seen in this post that compares how The New York Times treated the deaths of other men.

I’m thankful to all those who have done their part to stand up for our prophet and defend his good name. Whether by comment, email, or some other action you have taken, it has made a difference. Thank you for doing so in a spirit of love and with a desire for truth, not out of rage or revenge. I appreciate it – and I’m sure President Monson does too.

I’m guessing the author writes to his audience. I’m guessing because I didn’t read the article, or any thing else printed in any of the publications.

I read the apology. in it they state " It goes without saying, that he or she had won the respect and admiration of those who put them in the position to Lead ".. Truly they do not understand about the Prophet, or that men do not chose our leader,, sadly that is the way of the world today. so little understanding of things spiritual. We all stand for truth and light in regard's to Our belief . I am glad that we at least stood behind our Beloved Prophet .. May he rest in Peace.

Understand that journalism has changed. News outlets are no longer focused on quality. Instead, they simply write things that will create angst and go "viral". Just look at that tweet. It has a link back to their site to read their response. It's all about click bait! We would be better off ignoring it and never clicking on that or any other article written be the nyt.

I agree with you completely Clinton. We love and cherish President Monson and there is no journalist in the world who can change my mind or feelings about him and all he did in the Lord's name. It appears to me the journalist accomplished what he set out to do which was to get attention and get people riled up. I choose not to live my life according to the dictates of others but rather what I believe in my heart to be true. President Monson lived an earthly life in a more Devine role and he will be justly rewarded by our Heavenly Father. Nothing written or spoken of by man will change that.