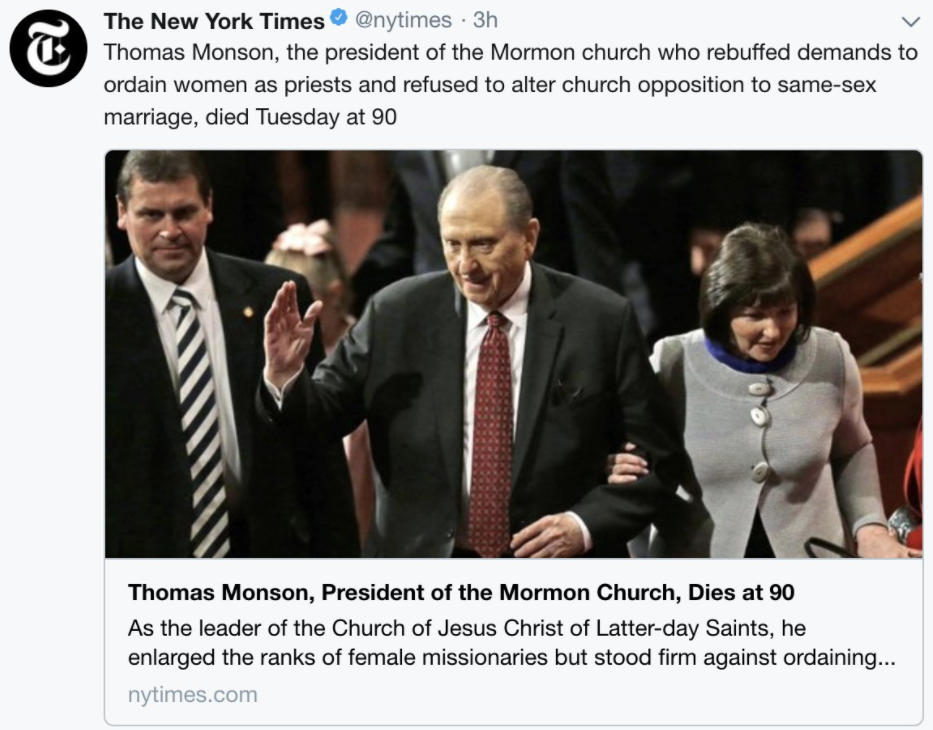 One LDS member on Twitter called out the New York Times because of the way they reported the death of LDS Church President Thomas S. Monson, arguing that a man who has done so much for global humanitarian efforts deserves more.

How the failing new york times covers the death of a playboy, a dictator, a mass murderer….. and the prophet of the mormon church who spent his life serving and organizing global humanitarian efforts.

The @nytimes is trash 🚮 pic.twitter.com/JXE4Ff848e

Brian Fagan took screenshots of headlines the New York Times used to report the deaths of Hugh Heifner, Charles Manson, and Fidel Castro, to compare they way they decided to portray the life of Thomas S. Monson.

Below you can see in larger detail the status and headlines which, as Fagan notes, is a disservice to President Monson whose life was spent in the service of others across the globe. 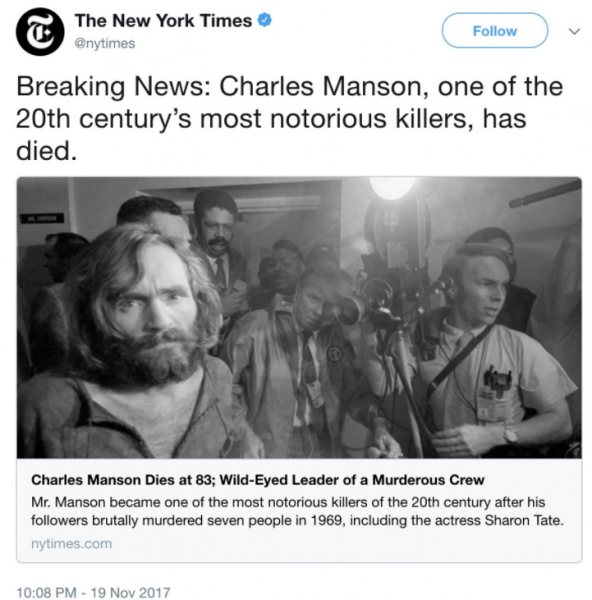 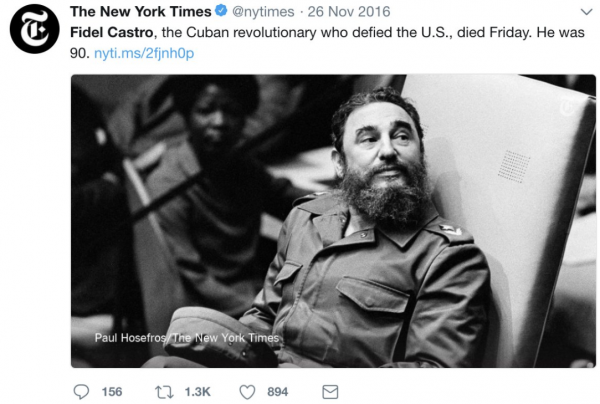 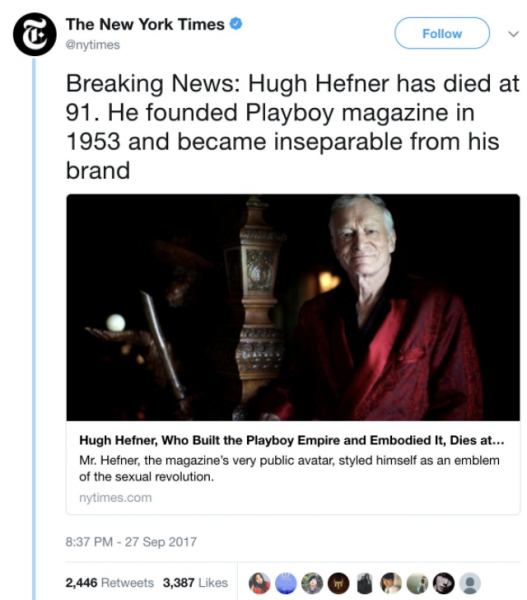 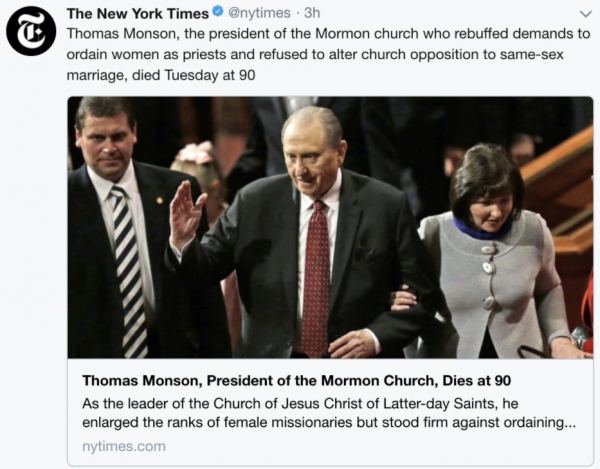 Hundreds of reactions in support of President Monson have flooded in from those who felt this great man deserved a much better send-off.

A reminder that servants of The Lord, including The Lord himself, have never been, and never will be popular, liked, or even respected by the world. Evil exists, but most importantly, so does God and this man was his prophet.

Fortunately, I think the backlash to this is going to damage the @nytimes a lot. Just a despicable article. They honestly should apologize. The just alienated 8 million Americans with one tweet.

If you were reporting the death of Thomas S. Monson, what headline would you use? #PresMonsonHeadline

Here is just a small list of awards and recognition that President Monson has received according to Wikipedia:

In 1966, Monson was honored as a distinguished alumnus by the University of Utah.[76] His first honorary degree, an Honorary Doctorate of Laws, was conferred in April 1981 by Brigham Young University.[21] He received a Doctor of Humane Letters from Salt Lake Community College in June 1996, an Honorary Doctor of Business from the University of Utah in May 2007,[1] and an honorary doctorate degree in Humanities from Dixie State College in May 2011.[77]

Monson received the Boy Scouts of America‘s Silver Beaver award in 1971 and Silver Buffalo award in 1978, the latter being the highest honor of the BSA. In October 1993, during the Priesthood Session of the church’s general conference, Monson also received the Bronze Wolf, the highest honor and only award of the World Organization of the Scout Movement,[78]and was recognized for his contributions when a leadership complex at the Summit Bechtel Reserve was named for him.[79] The citation for this award says,[48]

In his assignments throughout the world as a leader of [the LDS Church], President Monson worked tirelessly to bring about the advancement of Scouting in many countries. He worked closely with the World Organization of the Scout Movement to find ways to strengthen the links between the Church and national Scout associations. He was a committed, solid, hard-working volunteer in the Scout Movement. His Scouting leadership was exemplary.

In connection with the LDS Church’s centennial celebration as a chartered sponsor, the BSA announced that the Leadership Excellence Complex, located at The Summit Bechtel Family National Scout Reserve in West Virginia, would be renamed the Thomas S. Monson Leadership Excellence Complex and also awarded him Scouting’s Honor Medal in 2013 for saving the life of a girl who was drowning when he was 12 years old.[80] The Salt Lake chapter of Rotary International honored Monson at its international convention with its Worldwide Humanitarian Award in 2008.[21]