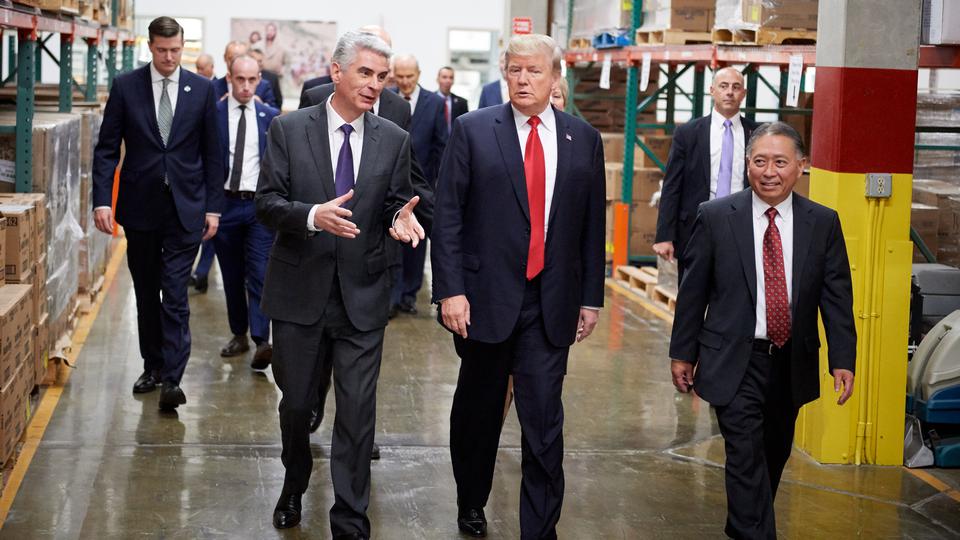 “We’re really proud of you. What you do is like nobody else.” Those were the words of U.S. President Donald J. Trump in his first visit to Salt Lake City since becoming president nearly a year ago. President Trump met with leaders of The Church of Jesus Christ of Latter-day Saints at Welfare Square Monday, December 4, 2017.

He was greeted by President Henry B. Eyring of the Church’s First Presidency; President Russell M. Nelson of the Quorum of the Twelve Apostles; Bishop Gérald Caussé of the Presiding Bishopric; and Sister Jean B. Bingham, Relief Society general president.

Church leaders took the president on a late-morning tour of the bishops’ storehouse and Deseret Bakery, where he learned about the Church’s welfare facilities and self-reliance programs, which are dedicated to serving the needy of many faiths around the world.

“We’re here in a place where we have food and materials that we give to the poor,” explained President Eyring. “This is simply an example of what we do across the world, the idea being that we think we have an obligation to God to look out for the people who, without our aid, have tragedy in their lives, be it poverty or hunger.”

While stopping at the bakery, the president invited volunteers to come out and take pictures and shake his hand.

In referring to the Church, President Trump said, “This is very exciting for me. The job you’ve done is beyond anything you could think of — taking care of people the way you take care of people and the respect that you have all over the world.”

Resources at Welfare Square come from member donations. Most of the people who process the goods are volunteers. The Church also owns farms, ranches, orchards and lands that supply the raw materials. Volunteers also assist in harvesting the crops.

In recent months, 50 semi-trailers of food from Welfare Square and other Church facilities were sent to Houston to assist in hurricane relief efforts, including 2 million pounds of commodities and non-food items. Church members throughout Texas and surrounding states also volunteered more than a million hours of labor in ongoing cleanup and recovery efforts.

Others included in the Salt Lake City visit were U.S. Senator Orrin Hatch from Utah and staff from the White House.