Missionaries in Zimbabwe Ordered to Stay Indoors Amid Military Takeover 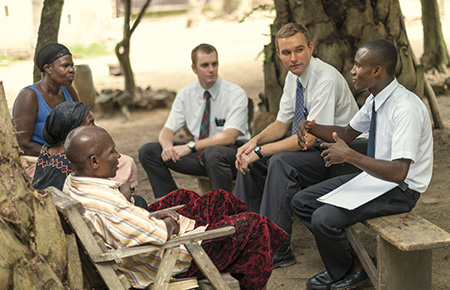 Military forces have taken over control in the African nation of Zimbabwe according to multiple reports. CNN posted the following update:

Mugabe, 93, the world’s oldest living leader, was unable to leave his home, according to Jacob Zuma, the President of neighboring South Africa. Troops were reportedly stationed at Zimbabwe’s Parliament and the presidential palace.

According to a report from Eric Hawkins, which he gave to the Deseret News, “”All missionaries are safe in the Zimbabwe Harare Mission. They have been instructed to remain indoors and have adequate supplies.”

In 1980 the government changed and the nation of Zimbabwe was formed. A new mission was established in Zimbabwe. At that time, membership was a little more than 1,000. Missionary work increased as local missionaries began serving full-time missions.

Since 1988 the Church has had an ongoing humanitarian project in Zimbabwe that has included the donation of funds, a mill for grinding grain, gardening materials, a dam near Masvingo, and two large shipments of new textbooks for Zimbabwe’s school children.

President Gordon B. Hinckley visited Zimbabwe and spoke to members on February 18, 1998 during a five-country tour of Africa. ¹

Ganel-Lyn Condie, whose son is currently serving in Zimbabwe, briefly addressed the situation in a Facebook livestream video.