A student at the University of Utah was shot and killed while he sat in his car in an attempted carjacking near Red Butte Canyon. The victim, ChenWei Guo, was a member of the Church of Jesus Christ of Latter day Saints and a returned missionary who served in Provo, Utah. 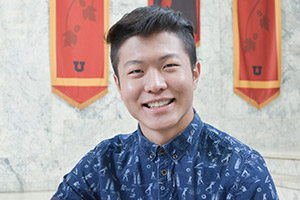 “ChenWei Guo was born in Beijing China. He has lived in many different places growing up as well as traveled to Europe and Asia.  He came to the US in 2012 and is currently studying computer science and entrepreneurship at the U.

His dream is to one day have his own consulting company to help more people feel good about themselves. During his spare time, Chen likes to have adventures like skydiving, skiing, horseback riding, and working with ISSS peer advisors. He also likes dancing and modern fashion. Oh, and French bulldogs!”

Those on Facebook have started to share their memories of Guo, and the impact that he had on his family.

Benjamin White, a seminary teacher in Utah, took to Facebook this morning to pay tribute to Guo after learning of his tragic death.

“I woke up to sad news this morning. Elder Guo, who served with another of our favorite missionaries Elder Paulsen, was the one who was tragically shot at the U of U last night.

His conversion story was absolutely inspiring. The effect of Elder Guo’s faith on his family cannot be overstated – they were all sealed together in the temple this past summer.

Sweet is the peace the gospel brings – especially when mortality can be so bitter. Thank you for your service Elder Guo. We are a better family because of it. May the Lord watch over your parents at such a tragic time.” 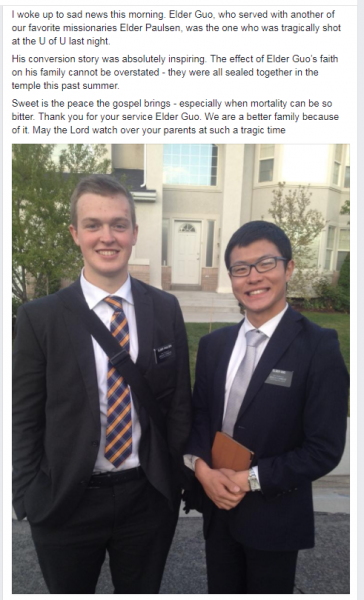 Our thoughts and prayers are with the Guo family as they seek comfort at this very painful and trying time. May they receive the peace they need, not only from God, but from us as we reach out with love and concern.

A student at the University of Utah was shot and killed while he sat in his car in an attempted carjacking near Red Butte..." />