If you haven’t been able to attend the Open House for the addition to the Missionary Training Center in Provo, Utah, don’t worry! You can feel like you are there as you watch this video and see what the new building has to offer.

I went on the self-guided MTC Tour with my family, and it truly was incredible. The thing I loved most was the murals and the inspirational scriptures that lined many of the hallways. Check out the video below!

Some additional information about the construction of the new Missionary Training Center is below via Mormon Newsroom:

“The new MTC tries to capture the best ways to think about learning and to create a learning environment that allows the missionaries to really fully understand their missionary purpose,” said Gary L. Crittenden, managing director of the Church’s Missionary Department.

The MTC has the capacity to train as many as 3,700 young men, young women and senior missionaries at a time.

“Growing up in the area, I’ve been able to see this building under construction for a while now, and I wasn’t sure if it would be completed by the time I got to the MTC. But I’m here now and it’s in use, and it’s amazing,” said Sister Kyla Rogers, a Salem, Utah, native who watched the buildings go up near the Brigham Young University campus. “It has these huge open spaces. The classrooms have these beautiful, big windows. And all the colors and the murals—everything is just so visually appealing, and it’s so nice to be here.” Sister Rogers will be serving in the Canada Calgary Mission.

The expansion at the Provo MTC took more than two years to complete. It includes two new six-story buildings with 200 new classrooms, more than 100 practice teaching rooms and 13 computer labs where missionaries receive training before they are sent to their assigned areas around the world. 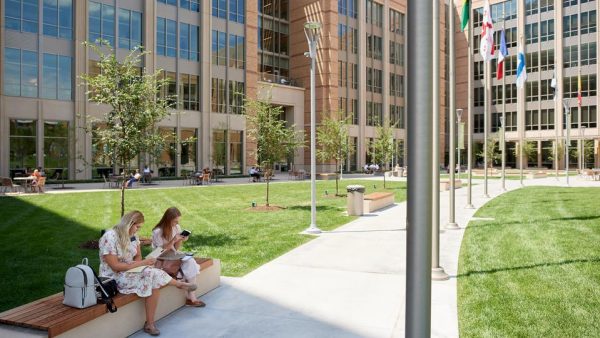 The new buildings feature extensive glass exteriors to maximize natural light and offer the missionaries views of the Wasatch Range of the Rocky Mountains.

“The location of the MTC, as you no doubt know, is in a spot that is nestled right up against the mountains, and they say that they see the beauty of the temple, they see the mountains around them, they see the Utah Valley and Utah Lake to the west. It’s a beautiful surrounding in which they have the opportunity to learn,” said Crittenden.

Administrative director of MTCs Kelly Mills added, “Our design was to do everything we could to create a space where we could connect what happens inside the buildings with the outside, to connect missionaries with God’s creations, and also to allow as much natural light into the spaces as possible,” said Kelly Mills, administrative director of the Church’s missionary training centers.

“There are a number of spaces that we refer to as ‘ponder spaces’ that are places where there’s beautiful artwork, there’s soft music playing in the background—lovely spaces where missionaries can sit,” said Mills.

Large meeting rooms and indoor and outdoor study areas were incorporated in the design to enhance the missionary training experience.

“I really like the outdoors at this new facility,” said Elder Jacob Rees, a missionary from Atlanta, Georgia, who will serve in the Taiwan Taipei Mission. “There’s one place in specific that I like to go to with my companion. It’s on the terrace on one of the new buildings. It’s just a green open area on top of a building, and we can always rely on [there] to just feel really peaceful and to feel the Spirit when we plan.”

Elder Joshua Haws, a missionary from Gallup, New Mexico, who will be serving in the Adriatic South Mission, enjoys the quiet spaces in the new buildings. “I love going to those ponder areas. They’re set up so that I can go and be quiet in an area and spread out all of my scriptures and things, and really just focus on digging into the scriptures and feasting on the words of Christ and pondering and learning about the Savior and all He’s done, and on being a better missionary because of it,” he said.

“I really love the murals and how amazing they are,” expressed Elder Garrett Freeman of Tooele, Utah, who serves in the Adriatic South Mission. His two favorite murals are one of Moses and another of the prophets in the Book of Mormon. “And it really just brings the story to life, and it really just makes it real to me.”

Since its opening in 1976, the Provo MTC has trained more than 600,000 missionaries from nearly every country. It is one of 15 MTCs worldwide where missionaries serving in the Church’s 421 missions receive training in 55 languages.

In October 2012, Church President Thomas S. Monson announced that men, known as elders, can serve two-year missions at age 18 instead of 19, and the minimum age to serve was also lowered for women, from 21 to 19. Sister missionaries are in the mission field for 18 months.

Expansion projects are also underway at MTCs in Mexico, Ghana and the Philippines to accommodate the training of a growing missionary force.

“The missionaries who come here have devoted eighteen months to two years to serving the Lord and serving others,” explained President Martino. “The principles and the doctrines they will learn here will not only develop a foundation for them to go out and be good missionaries, but [it will] be a foundation that will help them the rest of their lives.”

A Letter to Mormons from a Concerned Neighbor
← Previous
Amazon Alexa Just Made Morning Scriptures a Whole Lot Easier
Next →
Click here to cancel reply.
0shares