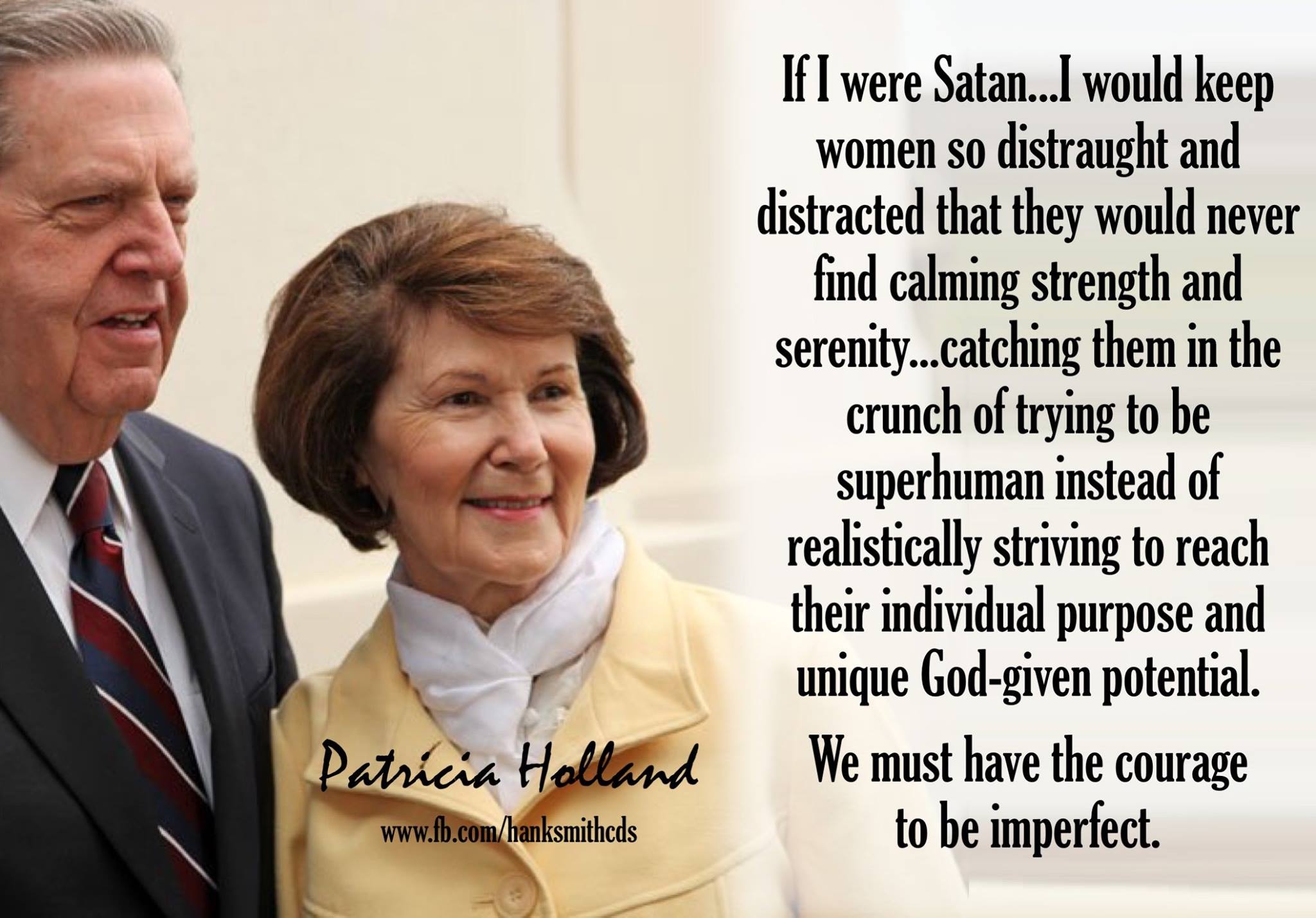 Though Patricia Holland spoke the words over 30 years ago, Hank Smith’s Facebook post, shared close to 3,000 times, shows that they still strike a cord.

In a talk given after her release from the Young Women General Presidency, Sister Holland reflected on her time of service and how completely drained she was, physically, emotionally, and spiritually.

Who was I, and where was I in this welter of demands? Should life be as hard as all this? How successful had I been in my several and competing assignments? Or had I muffed them all?

Seeing that Sister Holland could use a rest from her labors and worries, her husband, Jeffrey R. Holland, invited her to join him on a trip to Jerusalem where he would be traveling on assignment with the Brethren. 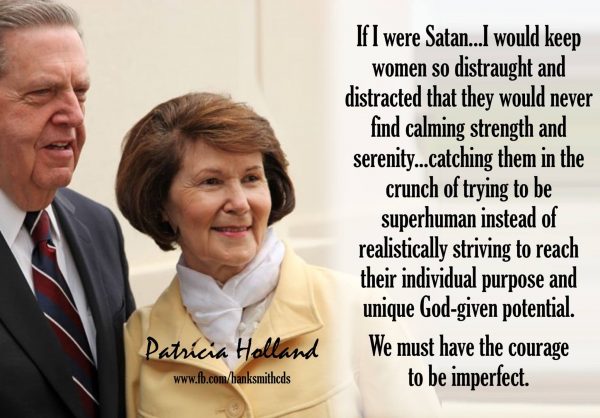 Sister Holland recounted one of her experiences while there. “On a pristinely clear and beautifully bright day, I sat overlooking the Sea of Galilee and reread the tenth chapter of Luke. But instead of the words on the page, I thought I saw with my mind and heard with my heart these words: “[Pat, Pat, Pat], thou art careful and troubled about many things.” Then the power of pure and personal revelation seized me as I read, “But one thing [only one thing] is [truly] needful.”

We must have the courage to be imperfect while striving for perfection.” – Patricia Holland

Sister Holland felt a peace and calm come over her as she sat in the warm May sun, and her soul was comforted.

Our loving Father in Heaven seemed to be whispering to me, “You don’t have to worry over so many things. The one thing that is needful—the only thing that is truly needful—is to keep your eyes toward the sun—my Son.”

Sister Holland then explained that many of the pressures she, and many woman are facing could be part of Satan’s plan to distract and overload to the point that they are not even able to do that which is most needful:

“If I were Satan and wanted to destroy a society, I think I would stage a full-blown blitz on women. I would keep them so distraught and distracted that they would never find the calming strength and serenity for which their sex has always been known.

Satan has effectively done that, catching us in the crunch of trying to be superhuman instead of striving to reach our unique, God-given potential within such diversity. He tauntingly teases us that if we don’t have it all—fame, fortune, families, and fun, and have it all the time—we have been short-changed and are second-class citizens in the race of life. As a sex we are struggling, our families are struggling, and our society is struggling. Drugs, teenage pregnancies, divorce, family violence, and suicide are some of the ever-increasing side effects of our collective life in the express lane.

Too many of us are struggling and suffering, too many are running faster than they have strength, expecting too much of themselves. As a result, we are experiencing new and undiagnosed stress-related illnesses”

We must have the courage to be imperfect while striving for perfection. We must not allow our own guilt, the feminist books, the talk-show hosts, or the whole media culture to sell us a bill of goods—or rather a bill of no goods.

Hank Smith, an LDS author and speaker, shared the following on his Facebook post, “Competition and comparison are thieves that will rob you of happiness and self-worth. As a wise man once said, “You have to break up with the world.”

To read the full address from Sister Holland, which is WELL worth your time, you can click here > One Thing is Needful by Patricia Holland