This story of spiritual rescue that gained broad attention after it was shared with Mormon mission presidents last month is inaccurate and the LDS leader who presented it withdrew it on Monday.

“A few weeks ago when speaking to new mission presidents at the Missionary Training Center, I shared a story about two brothers, just as I heard it from individuals who knew the family and had heard it recounted by a family member. Within a few days, my office was contacted by the family, who expressed concern that some elements of that account were not accurate due to embellishing by a family member.”

Elder Holland of the Quorum of the Twelve Apostles spoke on June 27, the fourth day of the 2017 Seminar for New Mission Presidents being held at the Provo Utah Missionary Training Center. His topic was “the Divine Companionship.”

Elder Holland closed by relating a story — being careful to protect the privacy and anonymity of the participants — of a young man from southern Idaho. One night the young man stormed out of the house and set off to join an infamous motorcycle gang. He succeeded in that resolve and for 20 years became immersed in a culture “of temptations yielded to and degradations explored,” never contacting his parents, who feared that he was dead.

Eventually ending up in Southern California, he one day was sitting on the porch of a rented home when he saw two LDS missionaries making their way up the street.

“With a rush of memory and guilt, regret and rage, he despised the very sight of them,” Elder Holland recounted. “But he was safe, because he kept all visitors at bay by employing two Doberman Pinschers who viciously charged the gate every moment that anyone came near.”

The dogs startled the missionaries as they passed by and continued on, “our man on the porch laughing at the lovely little drama he had just witnessed, wishing only that the gate hadn’t restrained his two dogs.”

Then, the two elders stopped, looked at each other, conversed a little, “likely said a silent prayer,” then turned around and approached the gate. 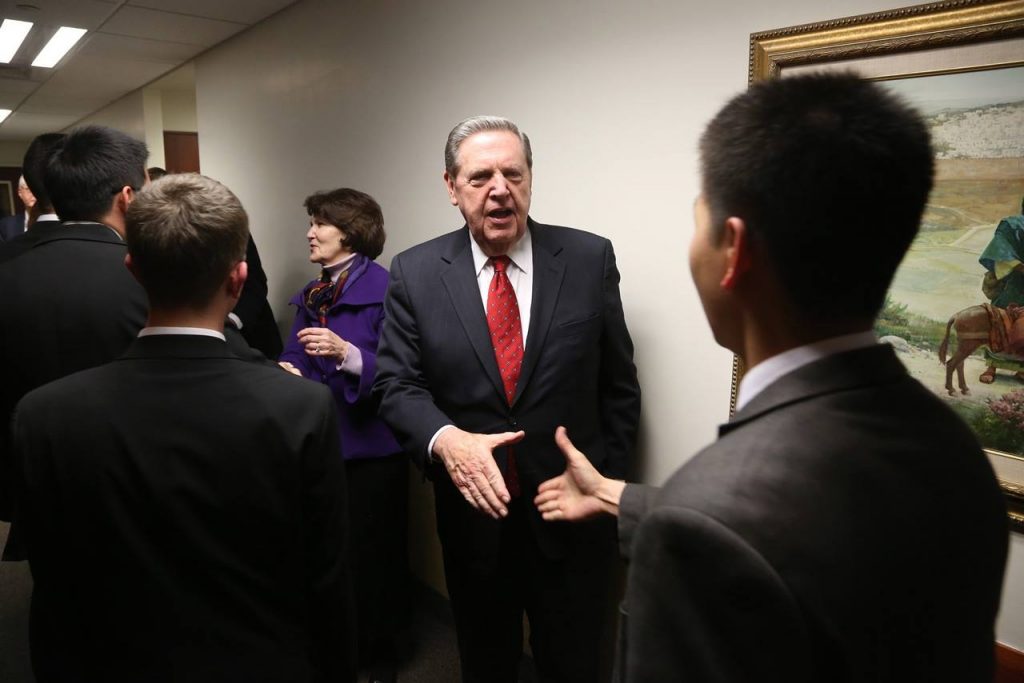 “The Dobermans on cue charged the gate again, hit it, snarling, frothing, and then stopped in their tracks,” Elder Holland said. “They looked at the missionaries, dropped their heads, ambled back to the front steps and lay down.”

The man on the porch was speechless as the missionaries opened the gate, walked up the path and greeted him.

“One of the elders said, ‘Are you from this part of California?’

“There was a pause. ‘That’s interesting,’ the elder said. ‘Do you know the [such-and-such] family in Pocatello?’

“With a stunned look, our biker paused, and then, in very measured words, said, ‘Yeah, I know them. They are my parents.’