5 Things You Did Not Know About Hyrum Smith The Patriarch 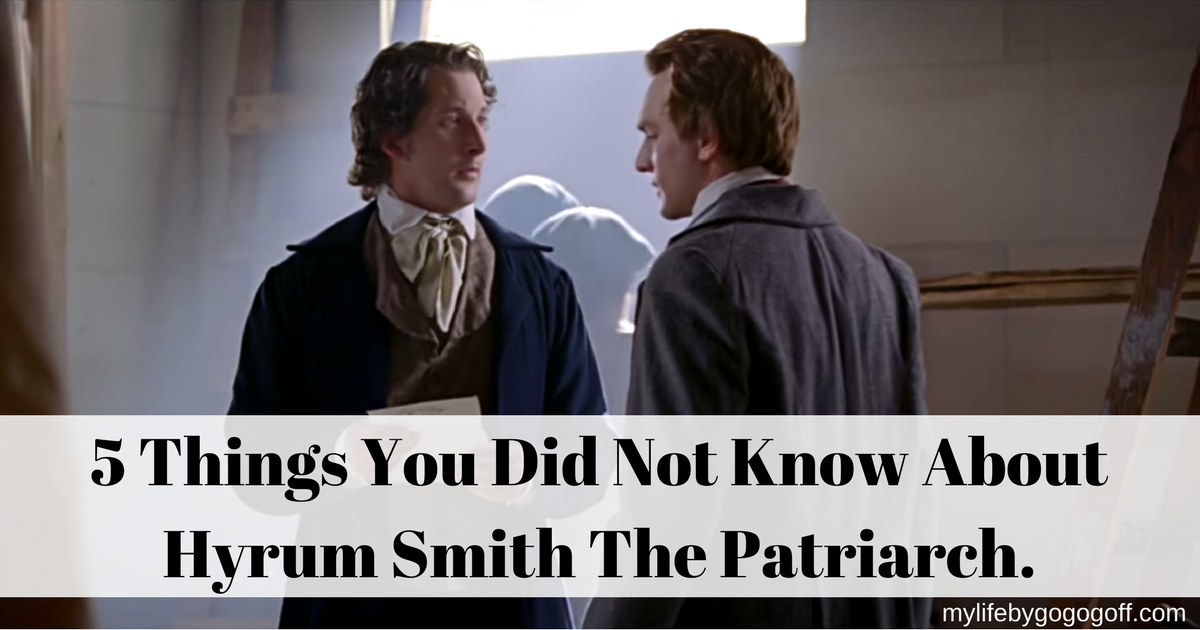 I love Hyrum Smith, I served my mission in Vermont and walked the hills were he was raised. We often extol Joseph Smith, Brigham Young and other early Prophets for their works and mission, but Hyrum is arguably the second most important man of the restoration. Hyrum’s legacy may not be well known, but Joseph counseled us to learn of it and follow it – for it is a legacy of selfless service to God. Hyrum’s life is the perfect example of devoted discipleship.

“Hyrum, thy name shall be written in the Book of the Law of the Lord, for those who come after thee to look upon, that they may pattern after thy works.” – Joseph Smith (August 11, 1842)

Understanding an extremely brief bio will help will help in explaining all the Hyrum did for the Restoration.

Hyrum was born in Tunbridge, Vermont on February 9th, 1800. He was the second oldest child of Joseph Sr. and Lucy Mack Smith. In 1826, at the age of 26, Hyrum married Jerusha Barden, who passed away 11 years later, in 1837. Later that same year, Hyrum married Mary Fielding Smith, the mother of the future prophet Joseph F Smith. Hyrum held many roles including Elder, Witness, Patriarch, Brevet Major General in the Nauvoo Legion, and Assistant to the Prophet. On June 27th, 1844 he assumed the title of martyr when he was assassinated by a mob in Carthage Jail. (Source)

With that basic understanding, here are 5 things you did not know about Hyrum Smith the Patriarch.

1. Hyrum was one of the first converts to the church.

Hyrum believed Joseph from the first time he told his family about the First Vision. Less than a month after the Aaronic Priesthood was restored by John the Baptist on May 15th, 1829, Hyrum was baptized. Hyrum was one of the first baptisms performed in this dispensation. For some reference, Hyrum was baptized a month before the translation of the Book of Mormon finished on July 1st, 1829. Joseph Smith Sr. was not baptized until April 1830 almost 10 months after Hyrum. Hyrum was also one of the 6 men who signed the church charter on April 6th, 1830. Of Hyrum’s faith in the Lord, Elder Ballard has taught:

“Hyrum had a believing heart; he did not have to see everything Joseph saw. For him, hearing the truth from Joseph’s lips and feeling the spiritual promptings whispering that it was true were enough.” – M. Russell Ballard (Hyrum Smith:“Firm As the Pillars of Heaven” Oct 1995) 2. Hyrum was always eager to build up the Kingdom.

Hyrum was always eager to share the gospel. He asked Joseph for the Lord’s guidance on the matter, and the Lord’s reply is recorded as Docrtine & Covenants Section 11. Hyrum wass told to wait until the Book of Mormon’s translation was finished (D&C 11:21-22). The moment the Book of Mormon’s translation was finished Hyrum diligently shared the gospel. He taught and baptized many of the church’s first converts. His efforts led to the creation of the Colesville Branch. In 1831 he moved to Kirtland and from 1831-1833 he served three church missions. Parley P. Pratt joined the church because of Hyrum’s missionary efforts. Parley P. Pratt then served a mission, converting John Taylor and Mary Fielding, Hyrum’s future wife.

When Joseph announced that the Lord wanted the Saints to build a temple in Kirtland, Hyrum went out to the temple plot and started clearing the weeds that day. Two days later Hyrum and Reynolds Cahoon started digging the foundation. Hyrum was always eager to obey and serve in the kingdom, proven by the fact that he served 6 church missions.