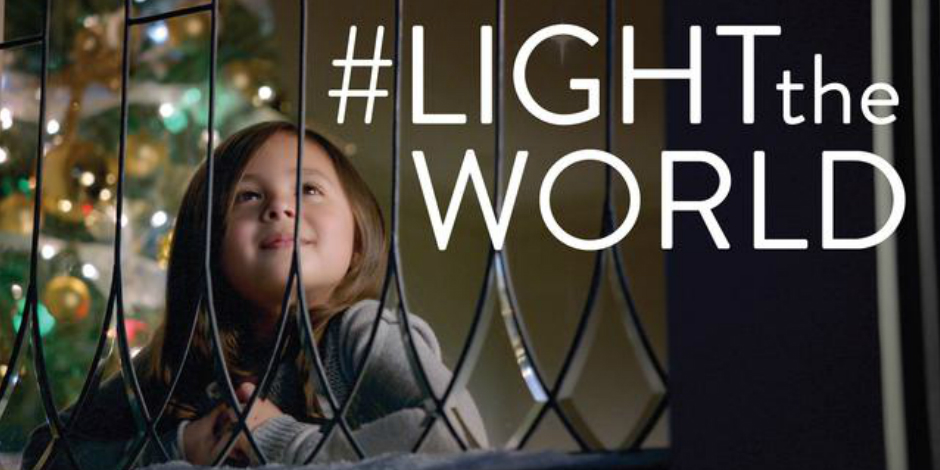 A global effort to celebrate the birth of Jesus Christ and encourage people to serve others during the Christmas season is being launched by The Church of Jesus Christ of Latter-day Saints. The “Light the World” Christmas initiative will reach worldwide audiences from Friday, November 25, 2016, through January 1, 2017.

The initiative focuses on celebrating and sharing the light of Jesus Christ, the “light of the world” (John 8:12).

“As we follow the example of the Savior and live as He lived and as He taught, that light will burn within us and will light the way for others,” said President Thomas S. Monson in a general conference address in October 2015.

“It’s the Christmas season,” said Elder David A. Bednar of the Quorum of the Twelve Apostles. “We have lights — all kinds of lights on our houses, on our trees, on our dining tables. So if we link those wonderful traditions with the source of truth, even Christ as the source of light, it just made great sense to all of us that that would be the theme that we would employ this year.”

Sharable online content will be available at mormon.org beginning November 25, including a video that invites the public to perform acts of service following Christ’s example during the Christmas season. The service effort will kick off Thursday, December 1, with a Worldwide Day of Service.

Elder Bednar explained, “The whole purpose of this initiative is to celebrate and share the Light of Christ. What we hope people will do is not simply think about the Savior during this Christmas season, or even just learn more about Him. What we hope is that they will come to know Him by doing what He did.”

A playable/downloadable version of the main video will also available on the Church’s Gospel Library app. In addition, 25 short videos offering daily ideas for service can be shared on social media during the initiative.

Elder Bednar said the Church is not trying to overwhelm people with ideas for service during the Christmas season. “These are very simple things that the Savior has provided the example. And we, in a very appropriate, simple way during this Christmas season, can do the same things that He did. He healed the blind. We can help the blind to see. We might, for example, read a story to someone in a nursing home who cannot see. Doesn’t take a lot of time, but a small, simple act of service that exemplifies the Light of Christ.”

The website, available in English, Spanish and Portuguese, features a downloadable advent calendar, “In 25 Ways. Over 25 Days.” A web landing page is provided for 26 other languages. The calendar provides daily ideas for planning service opportunities in December leading up to Christmas Day.

The Church’s Missionary Department has been sponsoring Christmas and Easter initiatives for the past several years to reach broader audiences with the Church’s message that Jesus Christ was born, lived, died and was resurrected to save all mankind.

Last December, the “A Savior Is Born” Christmas initiative reached millions of people around the world. The video had more than 50 million views. Millions were also reached last spring with the “Follow Him”Easter initiative.