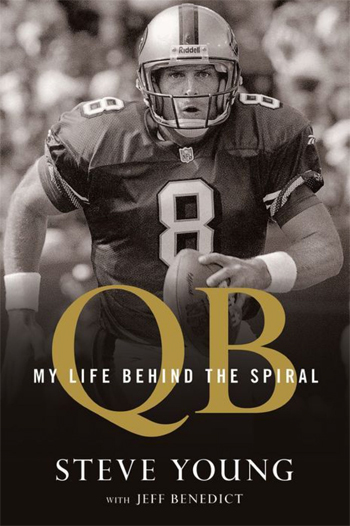 The life story of Steve Young—“QB: My Life Behind the Spiral” by Steve Young with Jeff Benedict (Houghton Mifflin Harcourt), due out Oct. 11, but available for preorder now—is a “candid and compelling” sports book giving a deep and exclusive look into the life of an NFL Quarterback.

In this new autobiography, NFL great Steve Young reveals that a referee let a call go his way in the Dec. 15, 1985 game between the Buccaneers and Colts in hopes Young would be swayed take the official’s daughter out for some Italian food.

Some excerpts from the book were published in Peter King’s MMQB column.

Even on the field, I can’t escape the craziness. We play the Colts at home. Partway through the second quarter I’m in the huddle when the head referee taps me on the shoulder. “Can I talk to you for a second?” he says. I step away from the huddle. “Hey, listen, my daughter’s going to BYU,” he whispers. Next thing I know he starts trying to convince me that I should meet his daughter. “I’d like you to take her out,” he says.

I cannot believe this. We’re in the middle of a game! “Oh, okay,” I said. “What’s her name?’’ He tells me and I return to the huddle … Late in the game we’re down 31-23 and I’m trying to mount a comeback. I scramble out of the pocket and take a brutal hit. It causes me to fumble just before the whistle blows to stop the play. I am lying on the ground when the defense recovers the loose ball, all but sealing our defeat. Suddenly out of nowhere a yellow flag lands next to me. The referee whose daughter is headed to BYU calls a personal foul on the defense. First down, Tampa Bay. I get up and brush myself off. Then the ref walks past me and whispers she likes Italian food.

Peter King said of the book, “That’s why this book is life. It’s amazing, with an athlete covered so thoroughly as the NFL was getting so huge, that there’s so much you won’t know. I think you’ll like digging into it.” You can preorder it here.

“Steve Young is a hero of mine, and his story is a source of inspiration for me.  His perseverance, intelligence and most of all, grace under pressure NFL-style, makes this book a fascinating read.  Thanks Steve for sharing your story with one of your biggest fans!” – Tom Brady

“All football fans know what a tremendously talented and successful quarterback Steve Young was in his NFL career. But what they don’t know about are the challenges and personal obstacles Steve had to overcome to make his dreams come true. This is a most exciting and compelling story.” – Roger Staubach

“There has never been a QB like Steve Young, and there has never been a football memoir quite like QB: A Life. Young’s battles with anxiety make you forget you are reading about a Hall of Famer, and make you root for him at every turn. This is a revealing, honest, compelling book that any fan will enjoy.” — Michael Rosenberg, Senior Writer, Sports Illustrated

“Steve was not just another Hall of Fame QB – he was extraordinary in every facet of life. His passion, preparation, and attention to detail is so vivid you feel as though this “QB” has put you right in the middle of a huddle of life. I’ve never read a football book with more honesty and integrity – it’s typical Steve. What a quarterback! What a man!” —  Jim Nantz, CBS Sports

“Steve Young’s scrambling, pinpoint passing, and perseverance helped make him an NFL Hall of Fame quarterback. He wowed us every Sunday. Until reading QB, though, I had no idea about the personal mountains he had to climb to make his dreams come true. This is a most memorable story for all fans.” – Chris Berman, ESPN

“Steve Young’s QB: My Life Behind the Spiral reads like he used to play: with fearlessness, creativity and accomplishment. This is not a typical, self-serving athlete autobiography. Young is unflinchingly honest in detailing his battles with anxiety, serving as role model for far more than just staring down a fourth quarter blitz. It’s a remarkable read.” —Dan Wetzel, National Columnist, Yahoo! Sports

Steve Young – About the Author

STEVE YOUNG is regarded as one of the greatest college and pro football players of all time. After a stellar career at Brigham Young University, the left-handed quarterback played professionally for more than fifteen years in the NFL, primarily with the San Francisco 49ers. He received numerous accolades during his playing days, including being named Most Valuable Player of Super Bowl XXIX, Sports Illustrated and Sporting News Player of the Year from 1992–1994, and the NFL’s Most Valuable Player for 1992 and 1994. In 2005, Young was inducted into the Pro Football Hall of Fame. He is one of the top-rated quarterbacks in NFL history. These days, in addition to his ongoing on-air work with ESPN’s Monday Night Football and his commitment to a number of charitable endeavors, Young is a managing director and cofounder of HGGC, a private equity fund based in San Francisco. As well as his undergraduate degree, Young also holds a law degree from BYU. He lives with his wife and family in Palo Alto.
3-Year Old Claire Ryann & Dad Sing You've Got a Friend in Me
← Previous
Nathan Pacheco Sings "Gethsemane" from Paul Cardall's Newest Album "A New Creation"
Next →
0 shares