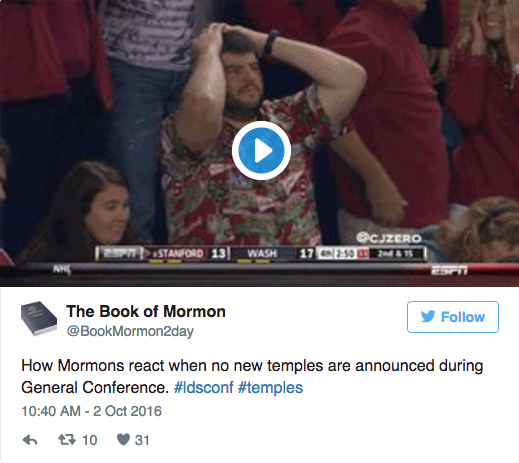 Just a few years ago, #ldsconf consisted of a small group of members, mixed with a small group of trolls attempting to duke it out with the best tweets and posts battling for the eyeballs. It’s now become a fire-hose of  inspired content from thousands of members of the Church across all social media platforms. The trolls are drowned out by the flood of positivity. Here is a sampling of some of the best tweets from General Conference. What were some of the best #ldconf posts that you saw? Let us know! And don’t forget to follow us on Twitter.

Believe in me. I believe in you. #ldsconf pic.twitter.com/apDlRktN1R

"Repentance is not just a back up plan." #LDSConf #BroAshton pic.twitter.com/fUbs0ZYiFl

Elder Cook: Put'er in compound, Dorothy! Time to gear down, power up and serve. #ldsconf pic.twitter.com/WC8mSR6hrg

“Just as gears combine to provide greater power in compound, we have greater power when we join together.”#ElderCCook | #LDSConf pic.twitter.com/UNE8huXeUG

How Mormons react when no new temples are announced during General Conference. #ldsconf #temples pic.twitter.com/uMB5ooYr1D

A retweet from twitter user @ScottHales80. Was going to make something like this but, this is good for now. #PresUchtdorf. pic.twitter.com/NktJsQifXD